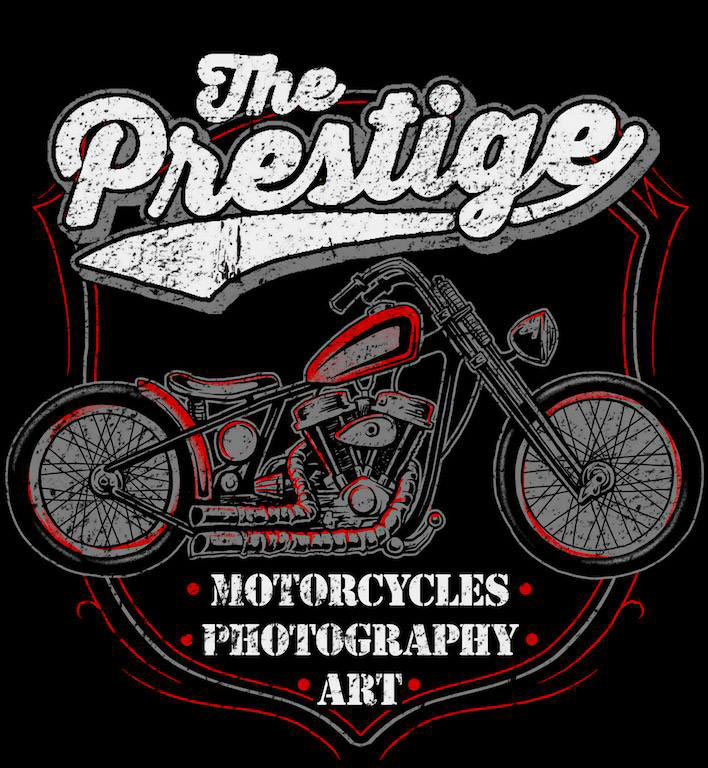 The Prestige inaugural bike, photography and art show this Saturday

Featuring bikes from Indian Larry and Girard Fox of Basketcase Productions (a 1922 Henderson), photography & art from Douglas Thompson (Tempus Deficit), Mark Velazquez, Jimmy Frizzell, Richard Fuggetta, and Bryan Helm, and host of moto sponsors, The Prestige hits Elmsford, NY this Saturday for what organizers hope will be an annual fixture on the local moto calendar.

The shop – located at 12A W Main Street in Elmsford – specializes in Harley-Davidson service, maintenance, performance and repair work. 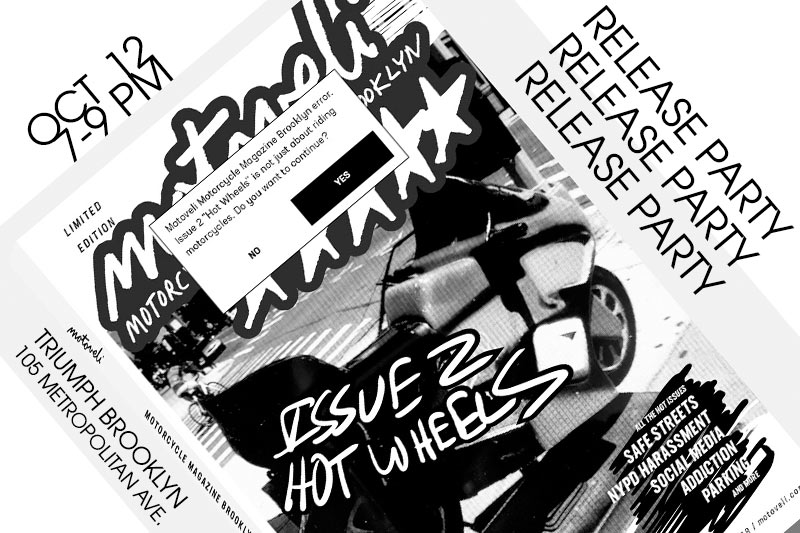 MORE INFO SOON: But mark your calendars for Friday, Oct. 12 as Motoveli Magazine will be hosting a party at Triumph Brooklyn from 7 to 9 PM to celebrate the release of Issue 2 of the Brooklyn-based publication for "riders and creators. Not to give anything away, but the new issue features articles on Safe Streets, NYPD Harassment, Social Media, Addiction, Parking and more. Motoveli issue 2 'Hot Wheels' includes featured riders @ampy0907, @cruface_killah, @fz09_nyc, Doug Gordon/Brooklyn Spoke, and contributions by @nyc_motorcyclist, @luciferspride, @bgrhymes, @bikesbitesandbooze, @ryansnelson, and more ...

Seven New York-based photographers volunteered their valuable services in documenting this year's Distinguished Gentleman's Ride though Manhattan, Brooklyn and Queens. Some shot while riding, some were passengers on the back of a bike, and some found stationary positions along the route, which took 800-plus riders over the Williamsburg and Queensboro Street bridges, through Central Park, Columbus Circle and Grand Army Plaza, and down the FDR, ducking under the Manhattan Bridge. The group, fronted by ride leaders Mike Higgins and Allister Klingensmith, included DGR founder Mark Hawwa as well as a host of international and local sponsors, members of Motofellas NYC and their DGR build -- the Dapper Braaaper, and fundraising giant Vincent Nicolai and the New York Classic Riders, who were the top non-corporate fundraising team in the world.

The gallery is not in chronological order, but rather seeks to highlight the movement and moments from the day while showing off the talents and unique styles of Geoff Barrenger, Ethan Covey, Mike Higgins, Taisiya Lazareva, John Saponara, JJ Sereday and Mark Squitieri. You can view the images as a collection, clicking on thumbnails to view larger versions. Or you can isolate each shooter's images by clicking on their names in the menu bar below. Enjoy the gallery, and if you use one of the photos in your social media, please credit the photographer. FOR THE LOVE OF MOTORCYCLES ... 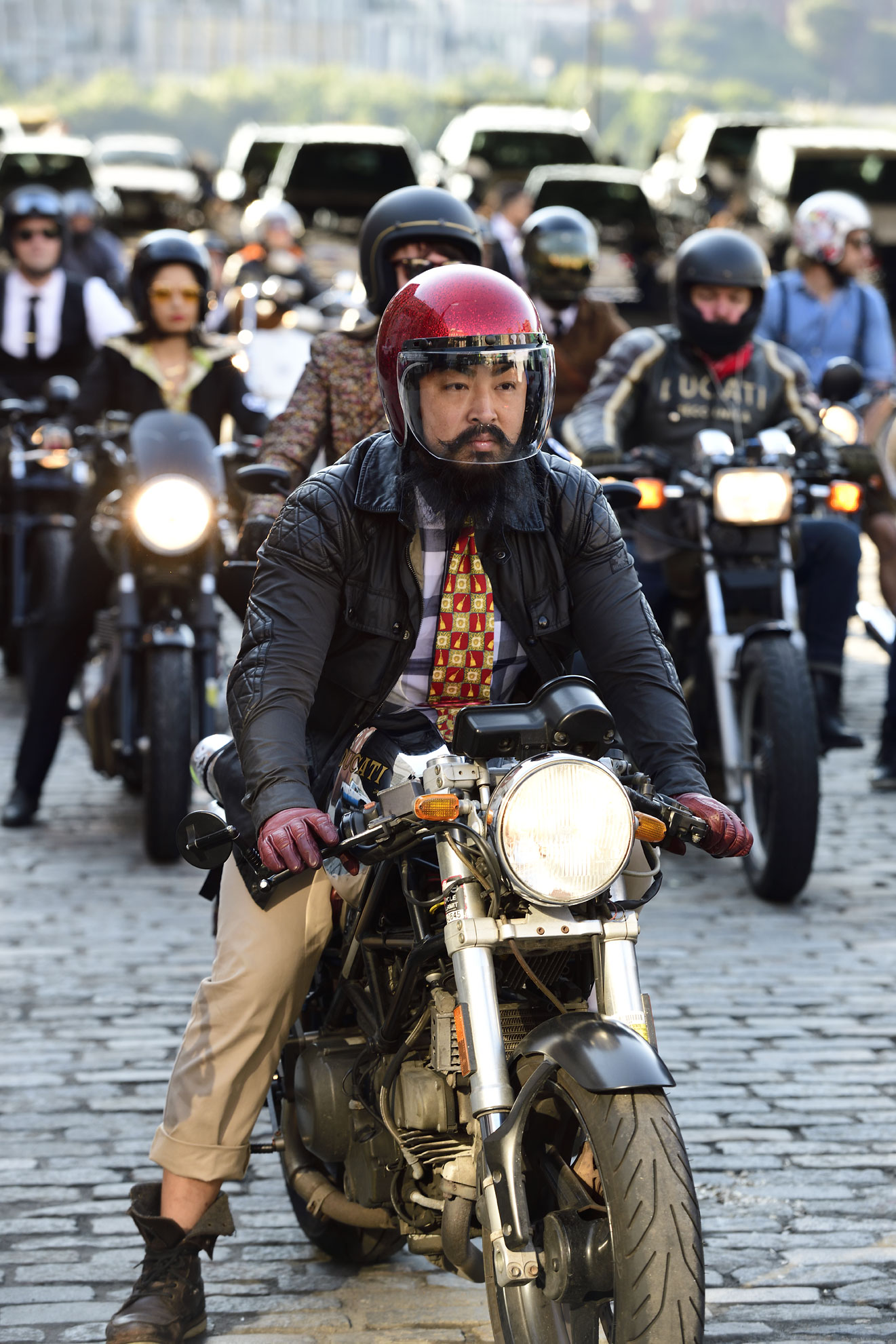 An image sampling of some of the distinguished characters who helped to make NYC the top North American ride, and second in the world this year ... from the start and finish at Peck Slip in South Seaport, and the midpoint stop at Natural History Museum, where a group photo was taken.

The local ride -- which took the suited, 800-plus, two-wheeled group through Manhattan, Brooklyn and Queens -- was a huge success, in no small part to the hard work of New York's finest who led, and blocked off intersections to keep us moving. A gentleman's tip of the helmet to them, DGR founder Mark Hawwa, ride organizers Mike Higgens and Allister Klingensmith, and sponsors for an incredible day supporting a worthy cause: funding prostate cancer research and men's mental health resources. 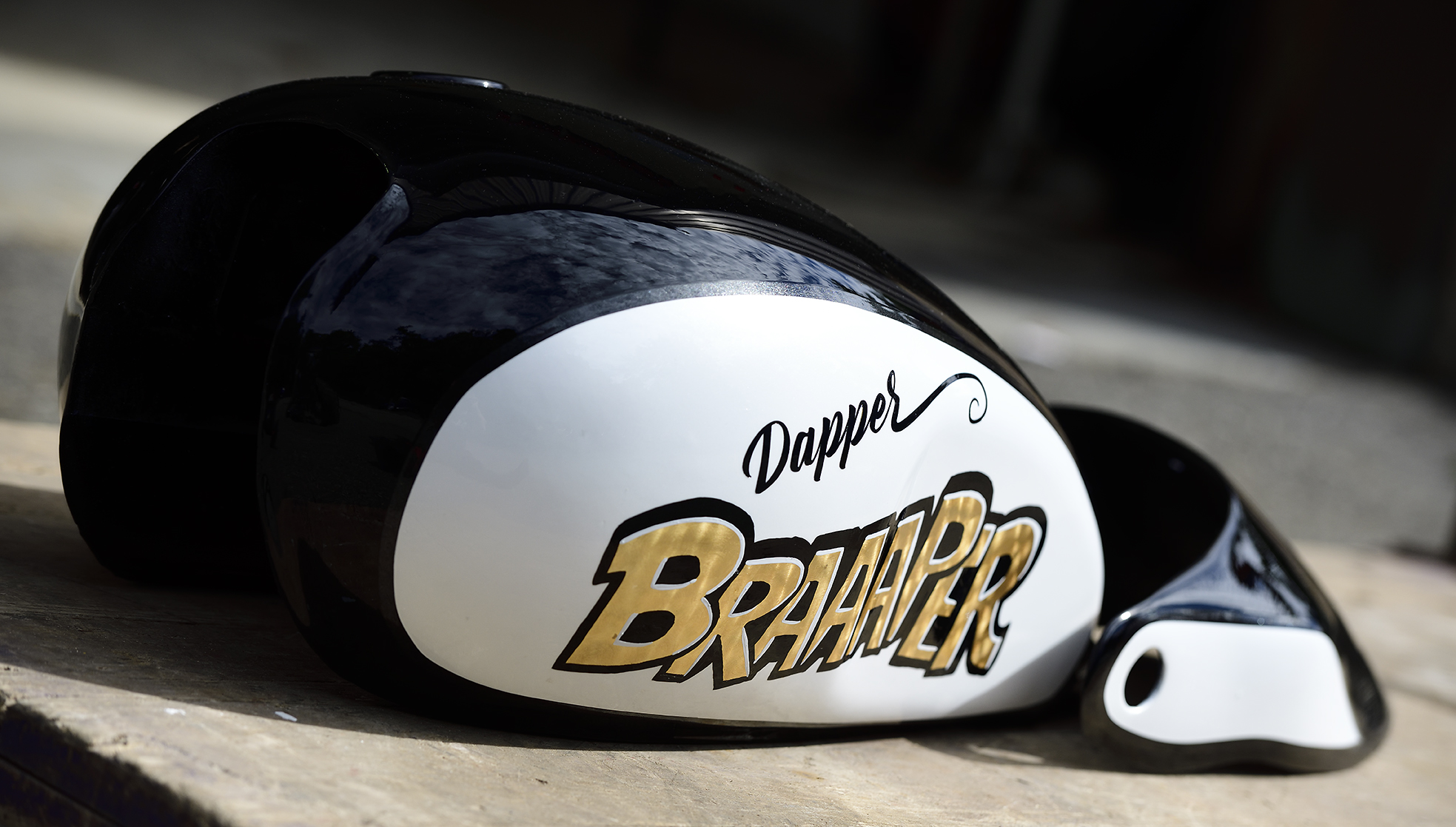 As an added incentive for NYC fundraisers, this year local Distinguished Gentleman's Ride organizers are raffling off a custom 2007 Triumph America motorcycle. The 'Dapper Braaaper', is an amazing bobber-meets-dragster-inspired bike build spearheaded by DGR NYC ride host Jason Hodrinsky, in collaboration with Brian Ballard of A & J Cycles, and a host of parts suppliers and talents, including British Customs, Biltwell, Motorgrrl, MotoFellas builder Chris Zahner and custom painter Ronnie Melendez of Weights and Paints. Overall build sponsor Zenith Watches helped to fund parts from Mickey Thompson, Barnett (custom throttle cables), and Buchanan's, who supplied Sun 21" rims and spokes. A&J kicked in some Avon rubber. And members from the MotoFellas helped with final assembly Sept. 22. The bike will be raffled off at the post ride finale event on Sept. 30 with the lucky winner selected from those NYC registered riders that qualify for entry by raising at least $50 in donations through their ride donation page. 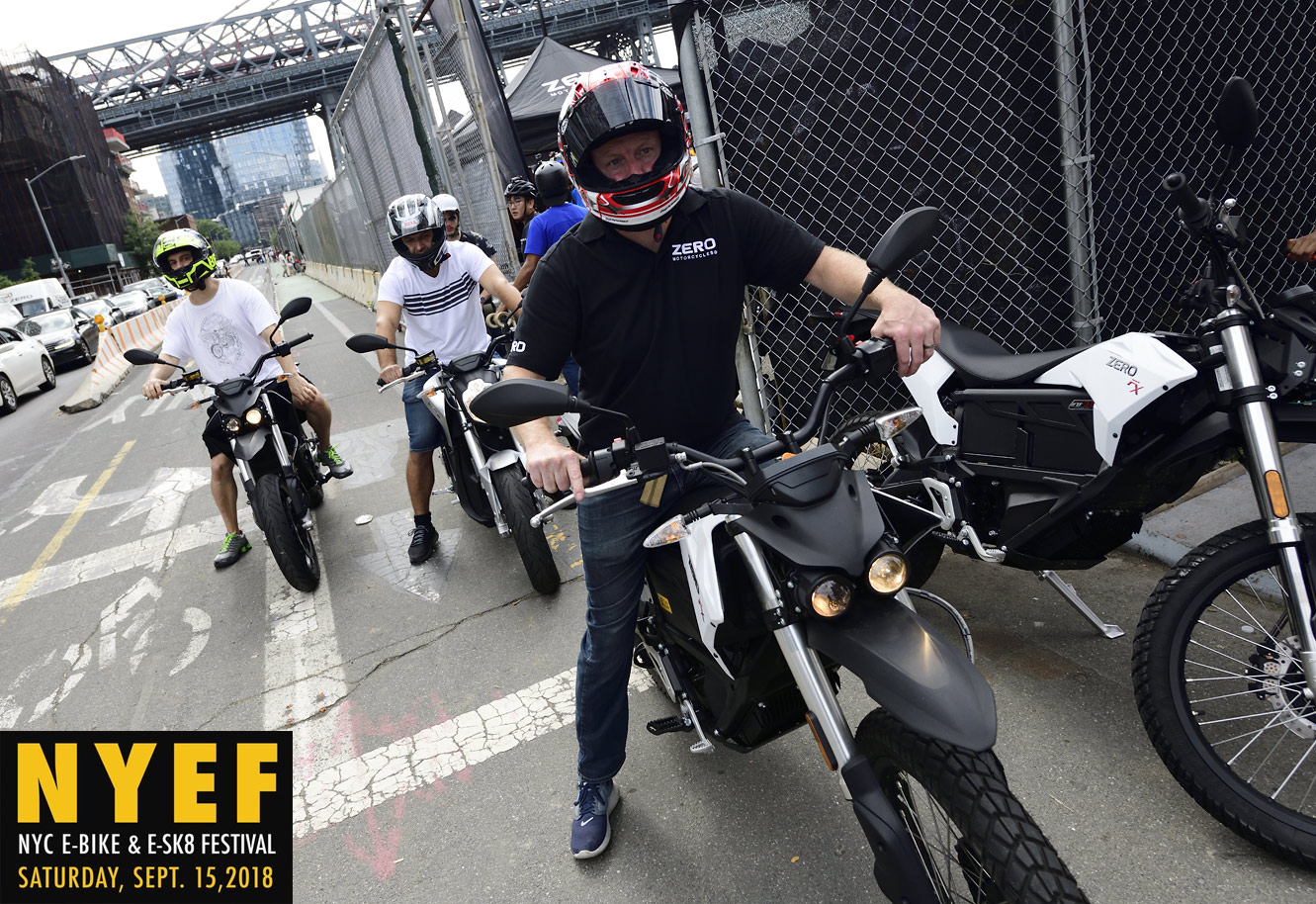 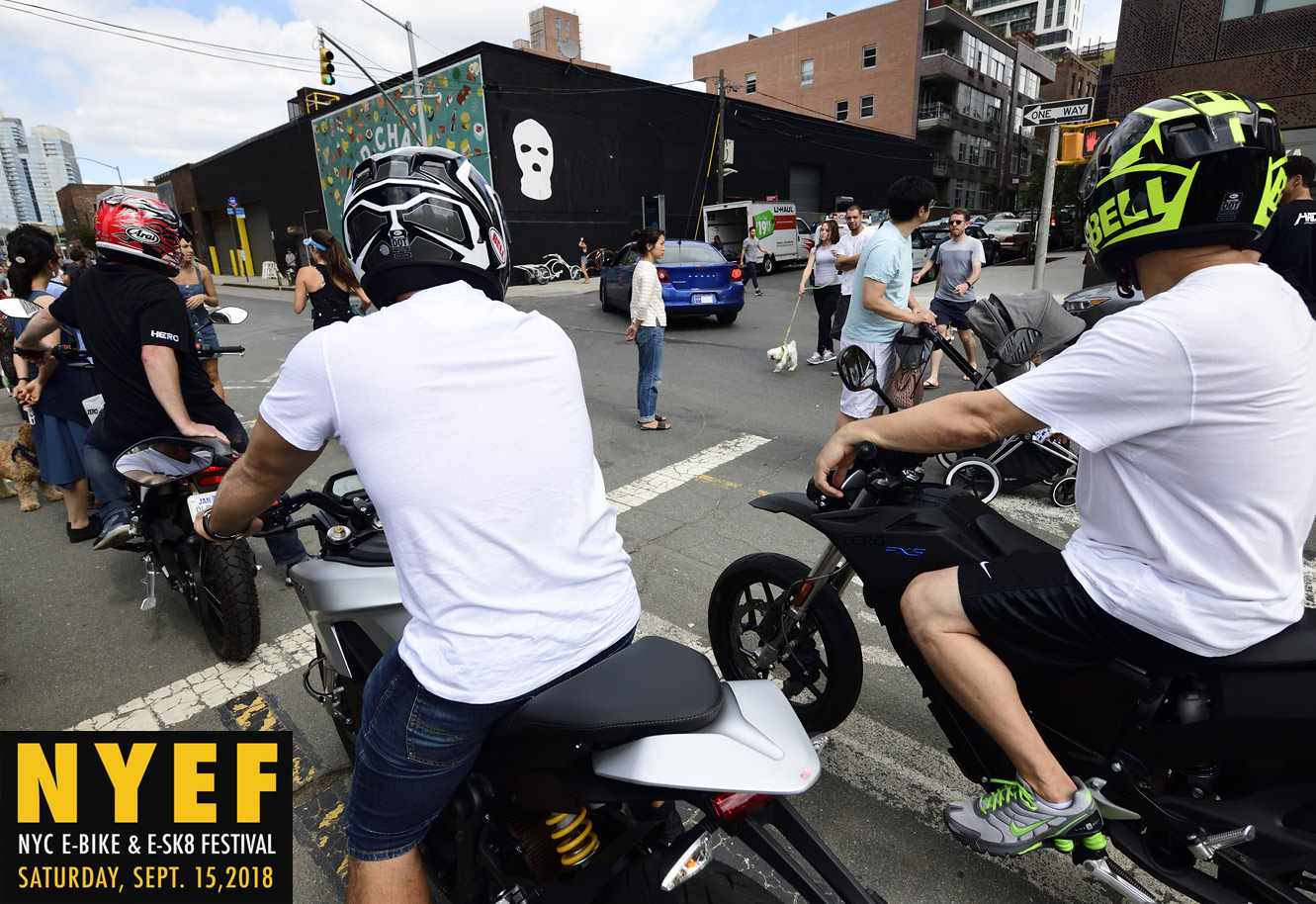 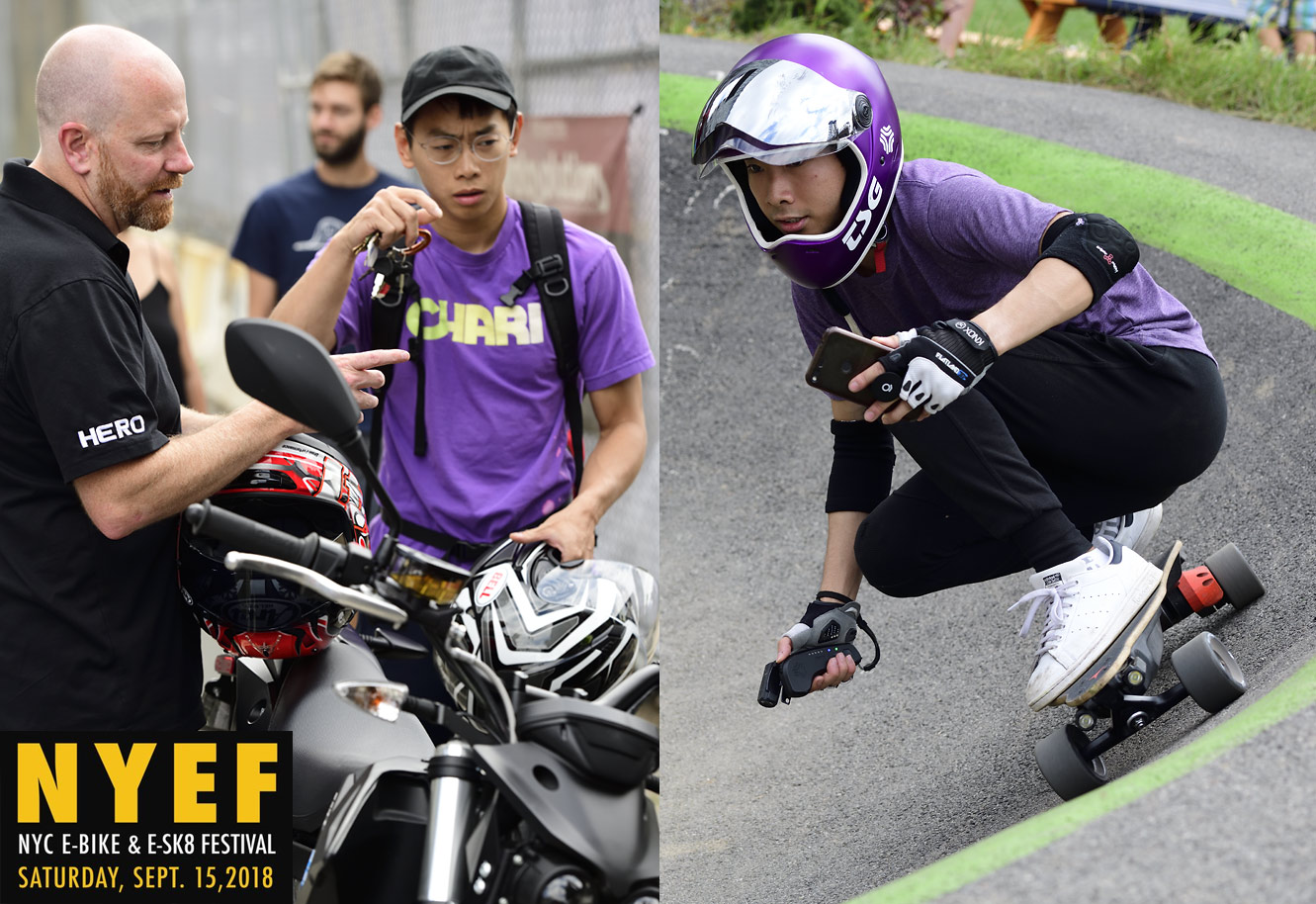 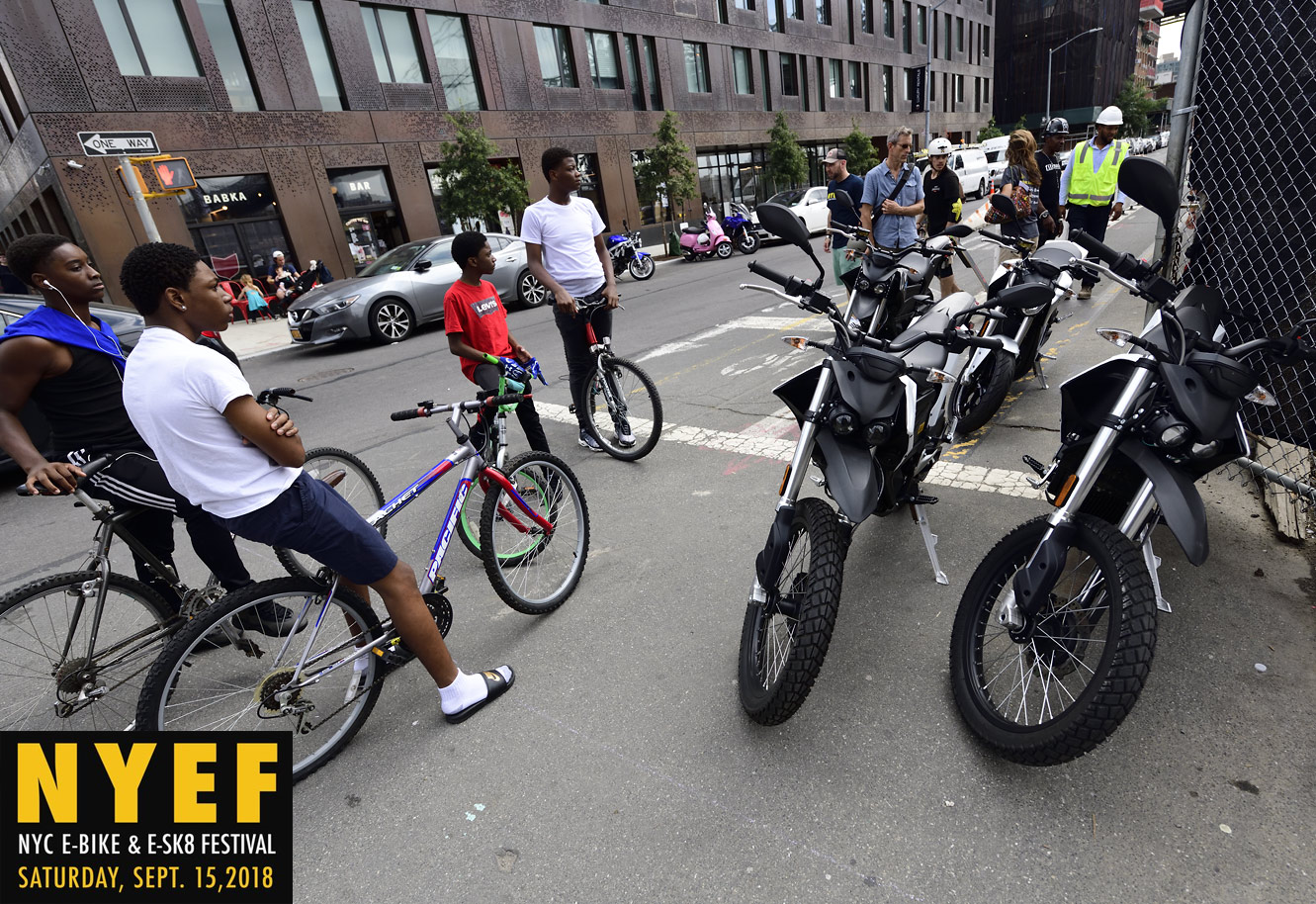 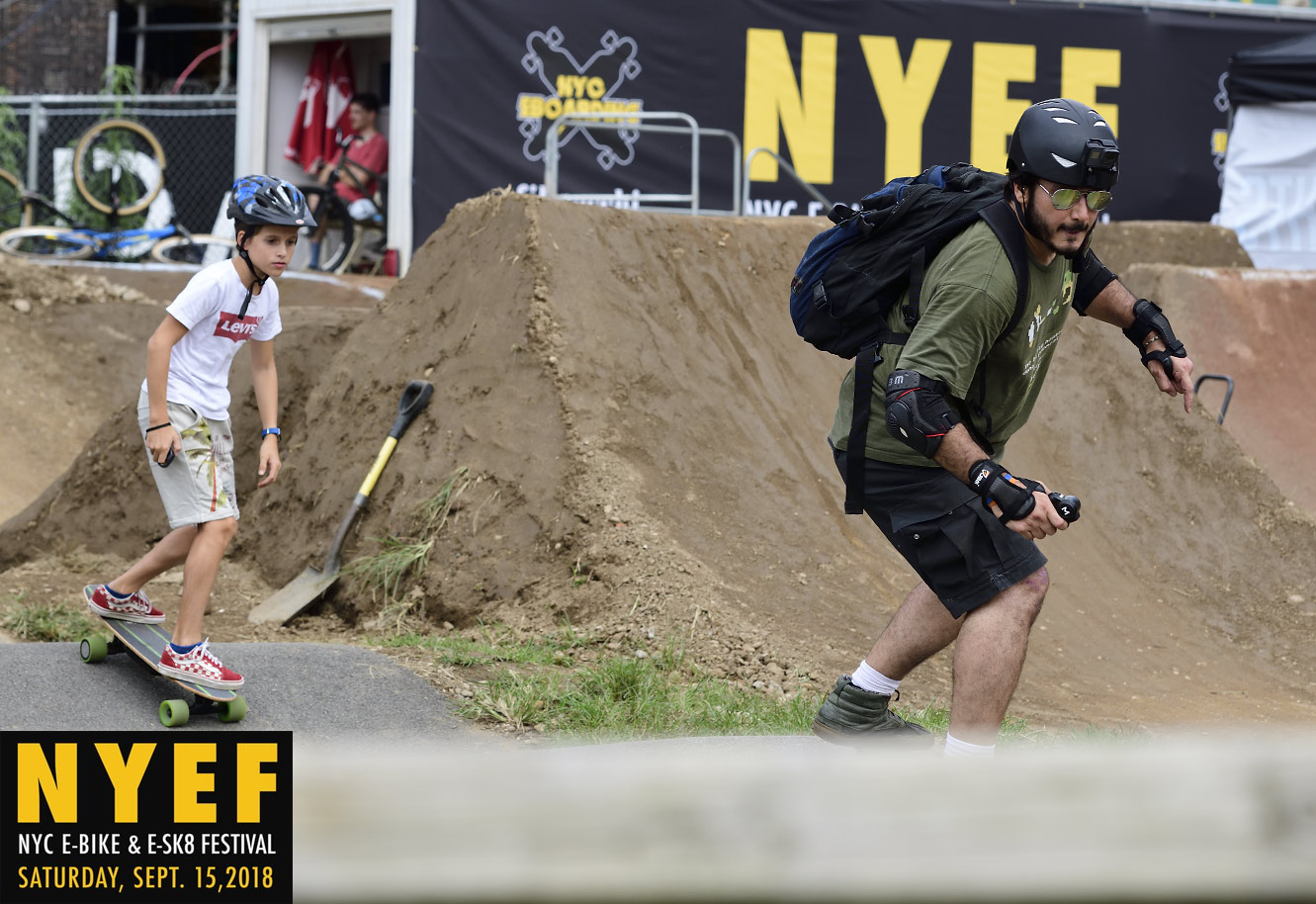 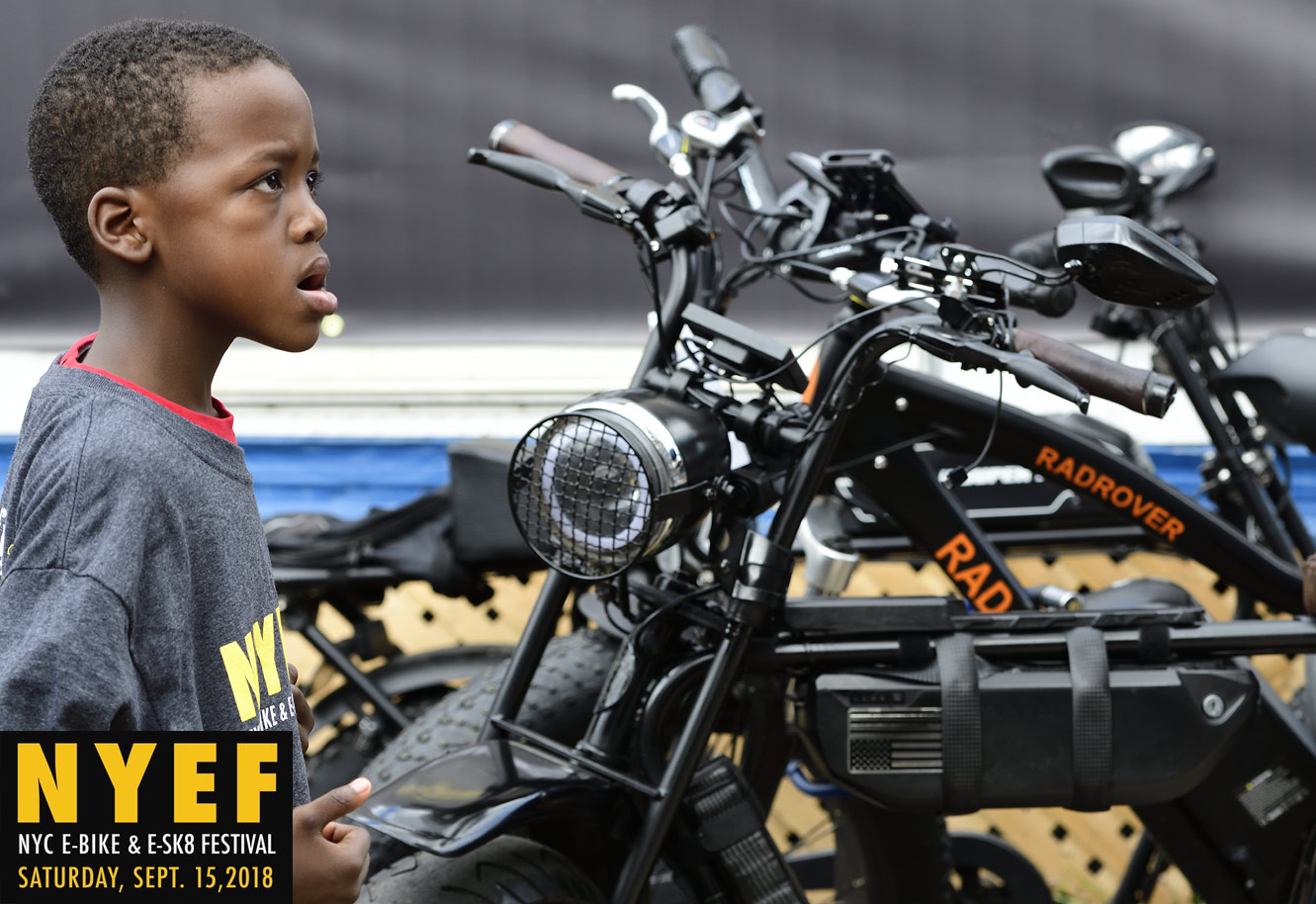 Free and open to the public, the New York eBike/eBoard Festival was the brainchild of the pioneering folks at Filipacchi, a day which featured all of the industry's leading eBoard, eBike and eMotorcycle brands, including: Boosted Boards, Evolve Skateboards USA, Inboard Technology, Zero Motorcycles, Thousand Helmets, Shredlights and NYC Eboarding. Filipacchi showcased Enki Cycles, LEIF Technologies and BajaBoard. 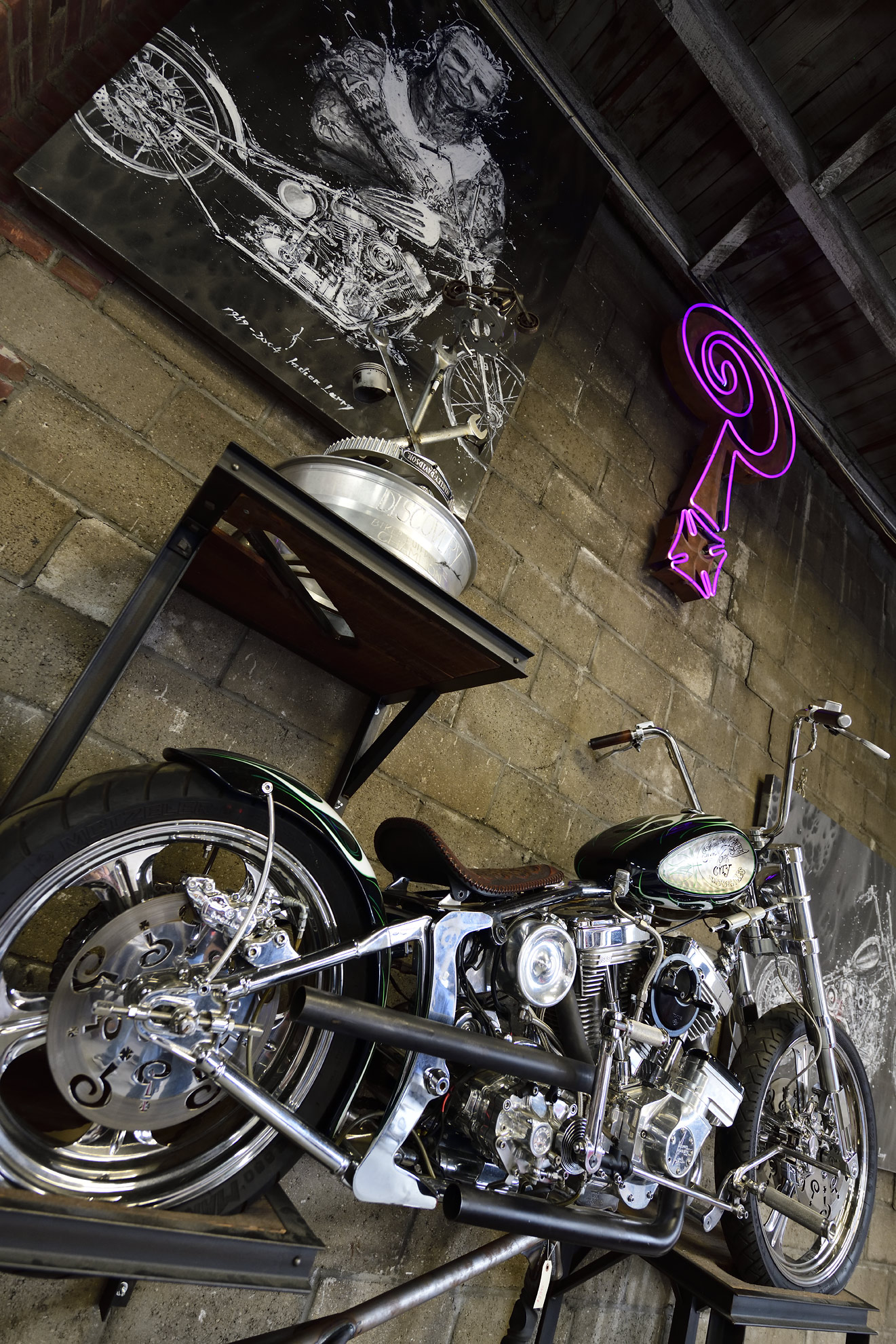 Whether it was the collection of inspiring rides -- including one the Ghost Rider would have felt at home on, marveling at Cole Freeman's stunt riding, collecting our 9/11 Ride coin from the NYC Punishers PJ Marcel, following Makoto Endo's brush strokes as he completed another stunning bike portrait, or just taking in the scene ... Indian Larry's 15th Annual Grease Monkey Block Party in Williamsburg did not disappoint.

The smell of gasoline, oil, cigars and BBQ permeated the air ... and the sun came out to play.

Enjoy our gallery from this year's event, including a collection of East Coast bike personalities, lots of iron, and a host of moments from the day. 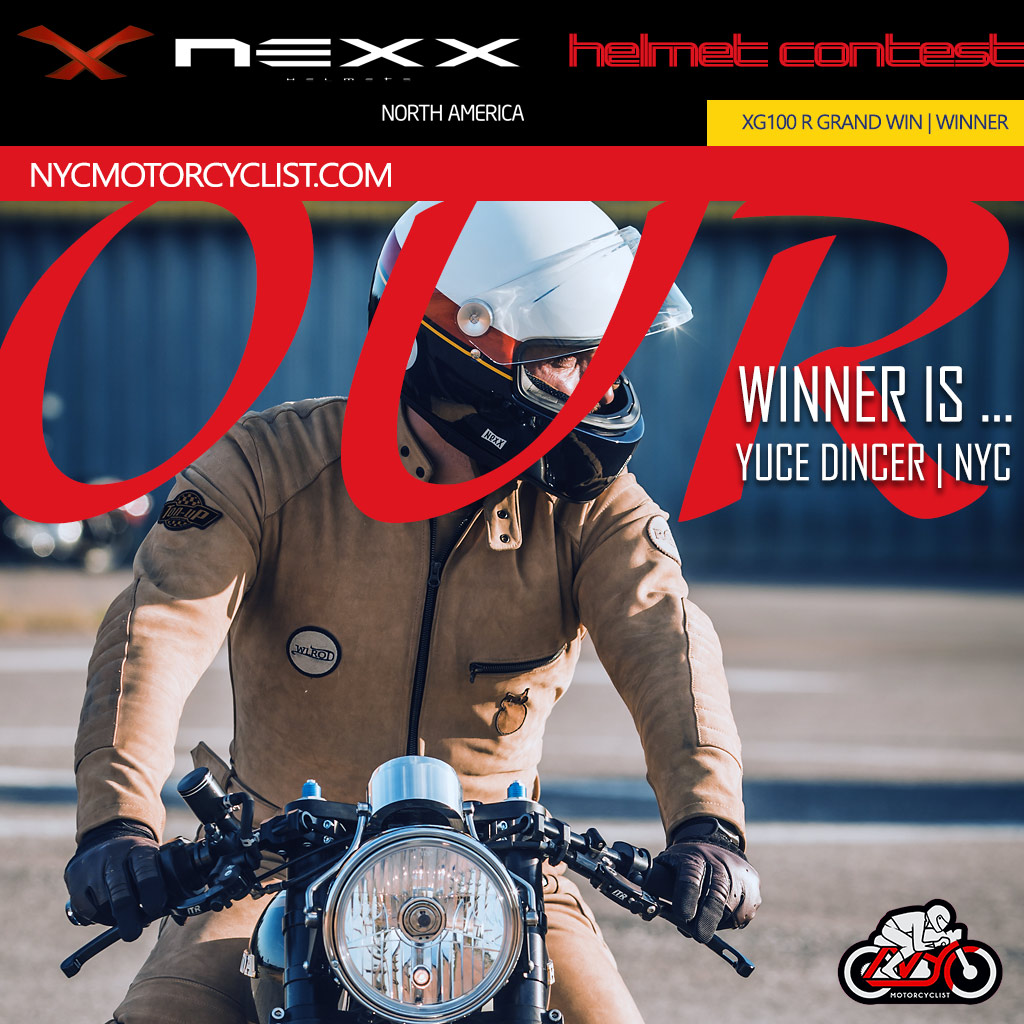 AND WE HAVE A WINNER WINNER: YUCE DINCER FROM NYC, NEW YORK

Yuce rides a Ducati Monster S2R and describes his favorite local ride as Rt 106 @ Harriman. We will be contacting you via email to get shipping details for your new helmet. Congrats from NEXX North America and NYC Motorcyclist. 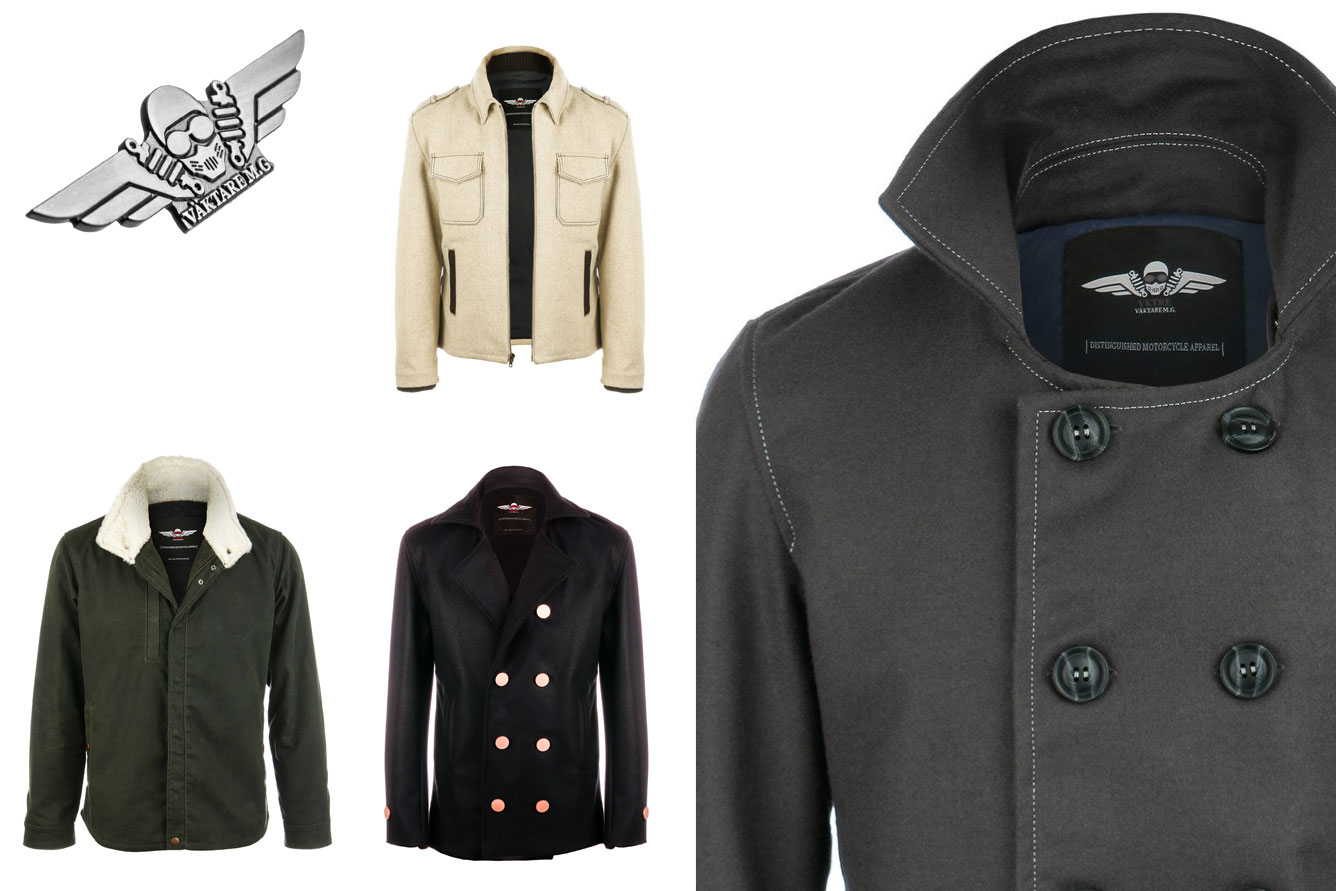 This month we sit down with Vaktare owner/designer Estefan Duarte, whose collection of city-inspired jackets are now available in NYC through Fillipachi in Manhattan. Combining style and safety, the jackets offer urban riders and commuters a new option for protection, on and off the bike. Retailing for $400 to $850, depending on the style and materials, Vaktare jackets can accommodate back, shoulder, and elbow armor, and come in both leather and wool variations. You might have seen some of the Los Angeles-based company's offerings last December at the IMS show in the Javitz Center as part of the SHIFT display. 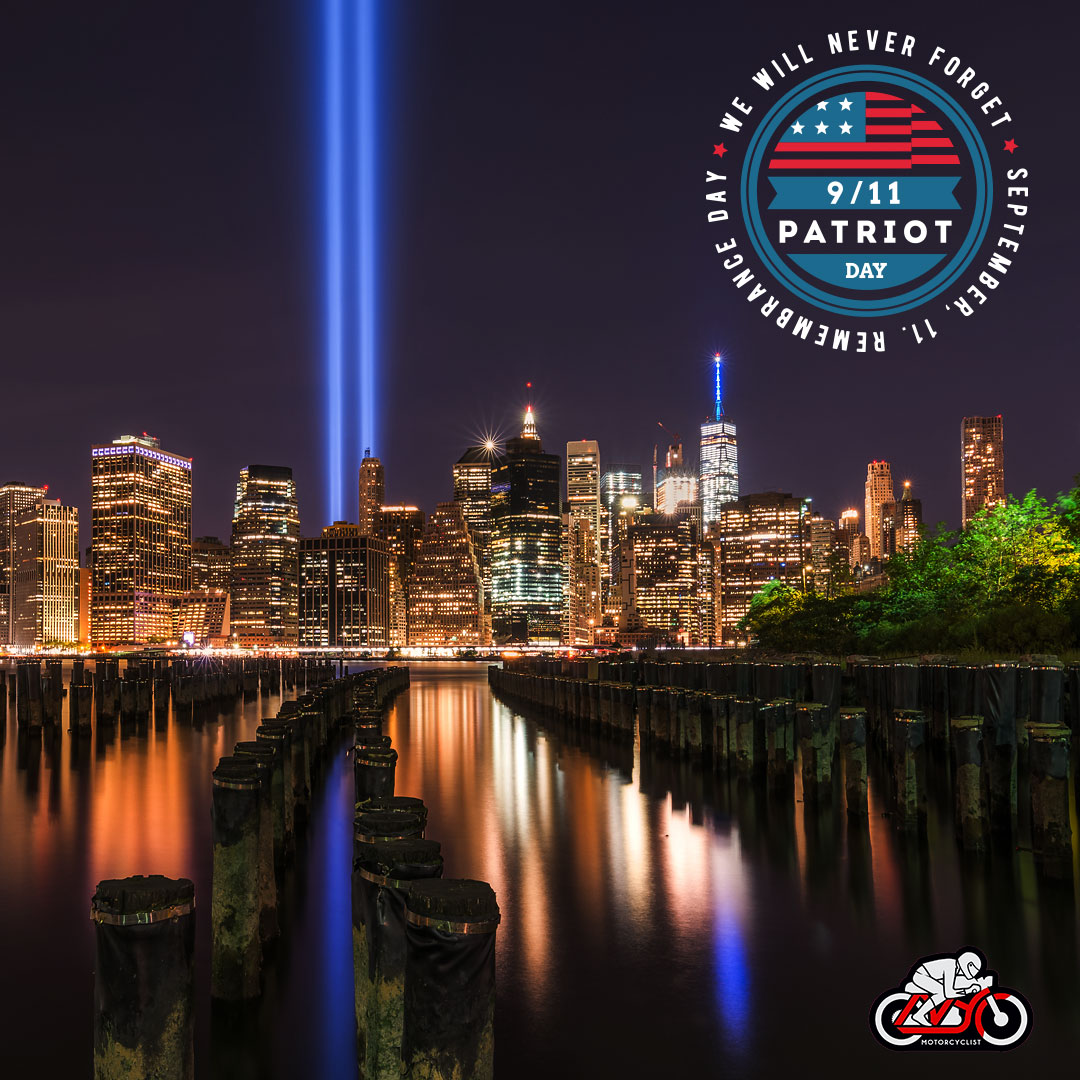 The Block Party is free to enter and enjoy. Pay-as-you-go food and drink are available, vendors will be out in full force to sell their unique products, and the Indian Larry showroom will be open selling tees and parts. 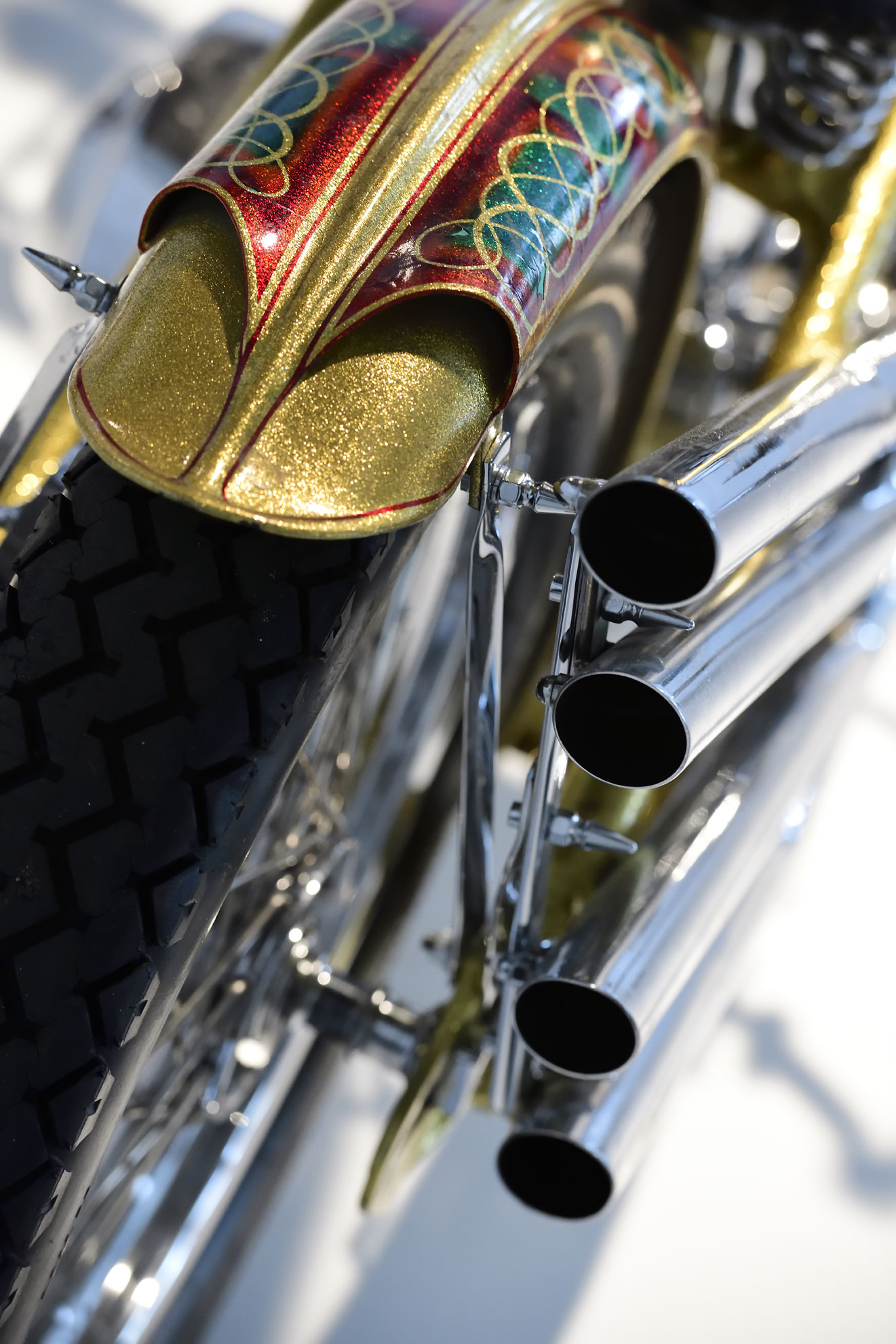 The brainchild of Keino Sasaki, John Copeland, and Jessica Lee Wertz, and sponsored this year by Indian Motorcycles, Tarform Motorcycles and New Era, the 10th Annual Brooklyn Invitational hit Williamsburg's Root Studios Sept. 8 with a stunning collection of more than 30 motorcycles from around the world, showcased in two rooms.

Check out our gallery of images from the event: the bikes and people, both inside and outside the Root Studios. 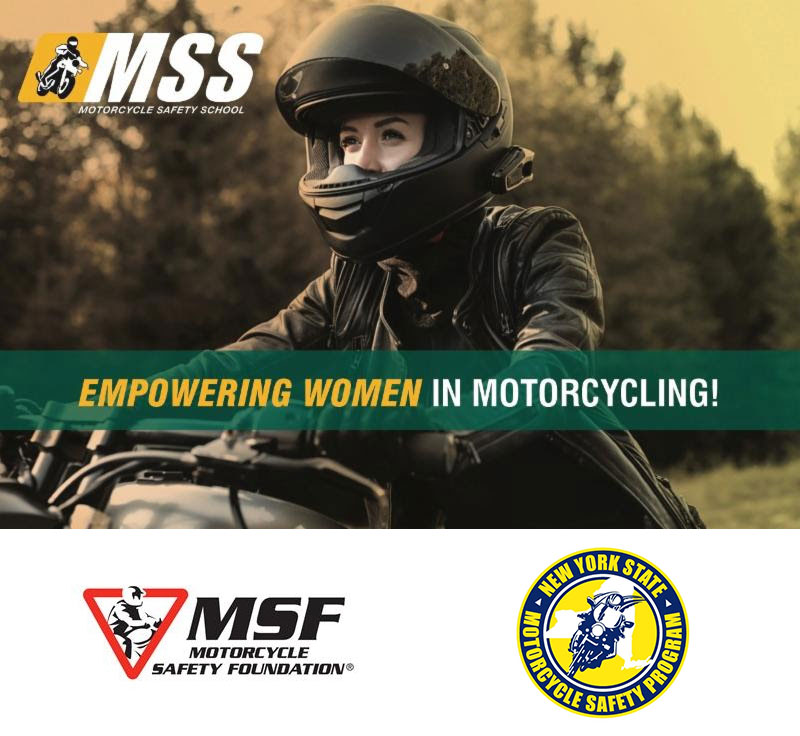 Women can try out motorcycling by taking an Introductory Motorcycle Experience class at a 50-per-cent discount, as well enroll in a women-only MSF Basic Rider Course at Spring Creek in Brooklyn the weekend of Oct. 13.

In New York State, the number of women enrolled in motorcycle training has increased. Last year the New York State Motorcycle Safety Program taught more than 17,000 new students how to ride a motorcycle, of which 19 per cent were women.

“We are thrilled to have more women embracing motorcycling and receiving the proper training,” says Ben Zadrozny, NYSMSP program manager.

According to 2015 Department of Motor Vehicles statistics, 10,159 women hold a motorcycle license in New York City counties. Between 2015 and 2017, Motorcycle Safety School saw a 28-per-cent increase in women being trained at its’ Brooklyn location.

“Women are finally finding out how exciting motorcycling is,” said BettyRae Lorenz, a certified MSF RiderCoach for 15 years. “They are also loving the camaraderie.” 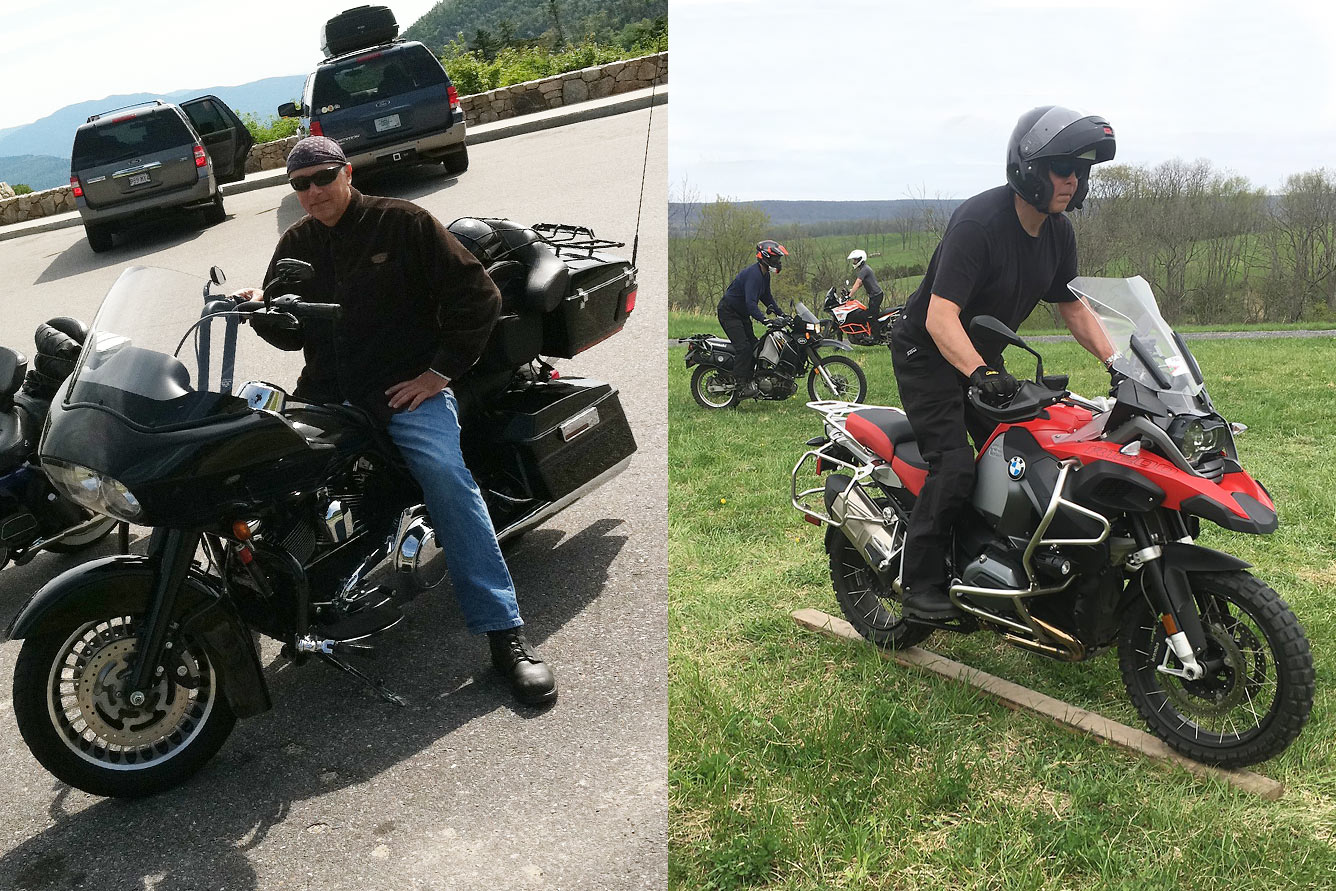 The now 61-year-old retired FDNY fire marshal tested positive for ‘the second most diagnosed cancer in men’ almost a decade ago, but early detection and treatment gave him a new lease on life.

“I believe that early testing and detection is extremely important – I was diagnosed at a relatively young age,” says McManus, who plans on riding in his first NYC DGR this coming September. “In my case, there weren’t any palpable tumors, as my cancer was still in the chemical stage. If it hadn’t been picked up by a PSA exam, who knows if I’d be here to do this interview. Prostate cancer is a slow-moving cancer, but it can still be deadly.” 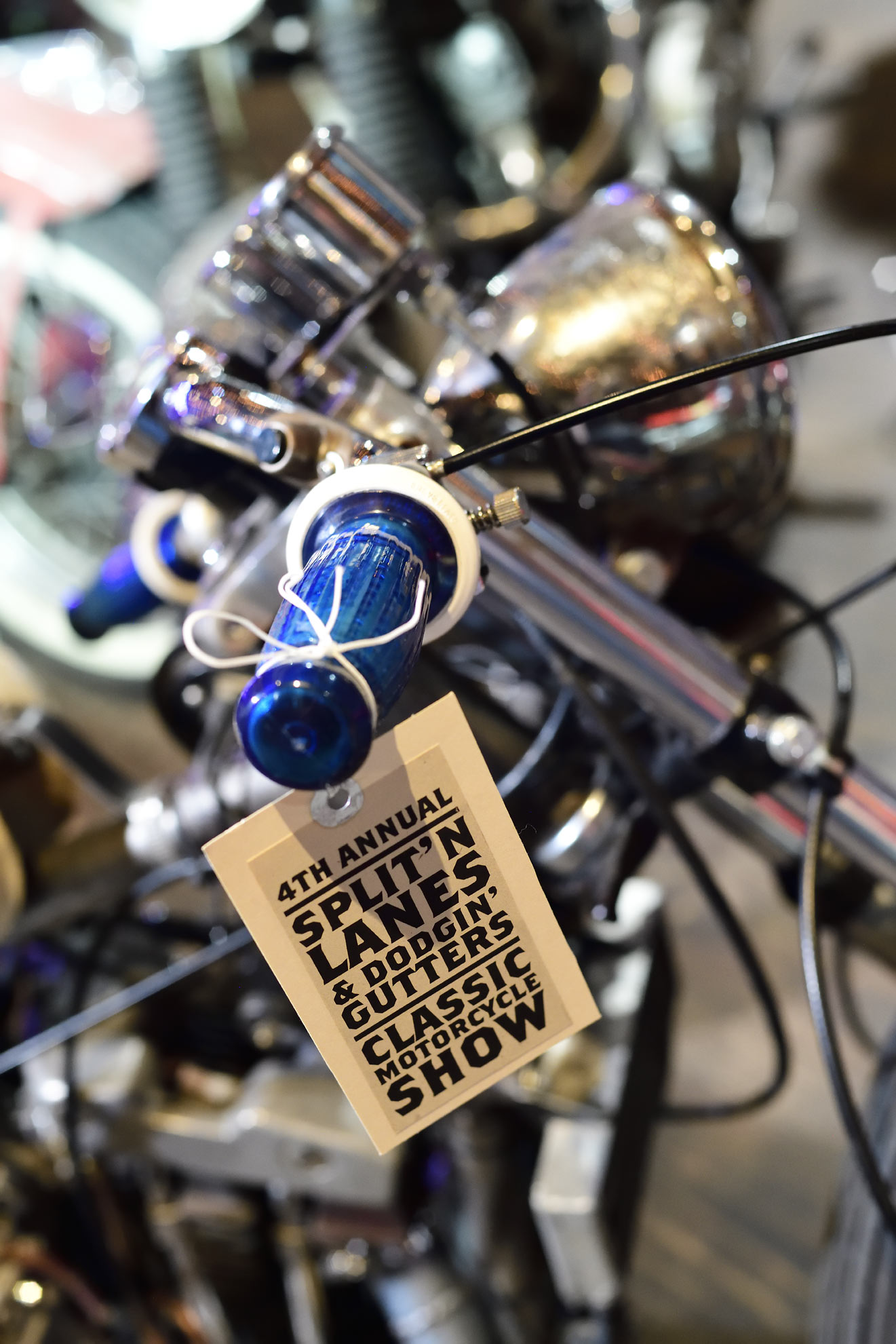 After a year outside in the heat and sunshine as The Lot, Basket Case Productions' Splitin' Lanes & Dodgin' Gutters made a triumphant return to Brooklyn Bowl in Williamsburg for its fourth year – Sunday, Aug. 19 – boasting an impressive collection of rarely seen classic and vintage motorcycles, a DJ, an in-house tintype photographer, food, drink and bowling.

For event co-organizers Girard Fox and Tim Warner, SL&DG is quite literally a labor of love, a chance to showcase close to 50 hand-picked motorcycles ranging from the teens-era, through the late '70s. But it is also about community. Bringing bikes and people together ... even if the elements don't oblige.

Check out our gallery of images from the event: setup in the morning, the motos on display, and some of the incredible details guests were treated to.

Free and open to the public, the New York eBike/eBoard Festival (NYEF) is the brainchild of the pioneering folks at Filipacchi, a day which features all of the industry's leading eBoard, eBike and eMotorcycle brands, including: Boosted Boards, Evolve Skateboards USA, Inboard Technology, Zero Motorcycles, Thousand Helmets, Shredlights and NYC Eboarding. Filipacchi will itself be showcasing Enki Cycles, LEIF Technologies and BajaBoard.

Located at 318 Kent Ave in Brooklyn, NYEF kicks off at 11AM with a DJ, MC, free demo rides, free giveaways, raffles, and complimentary food and drinks. Each eBrand will have a scheduled 15-minute time slot -- 12:30, 2:30, and 4:30 PM -- for a brand ambassador and/or a leading influencer to engage the audience and demo on the track. A night ride, organized by NYC Eboarding, caps off the event at 7 PM.

Go to the official Event Page [+]

Distinguished Gentleman's Ride: Riding & Raising for a Cause

Prolific Distinguished Gentleman's Ride fundraiser and New Yorker Vincent Nicolai takes Triumph North America on a ride through the city and explains why raising awareness of men’s health issues is so important. Learn more at https://www.gentlemansride.com/. To support Nicolai's fundraising efforts this year for the Sept. 30th ride, visit his DGR profile page at: https://www.gentlemansride.com/fundraisers/vincentnicolai