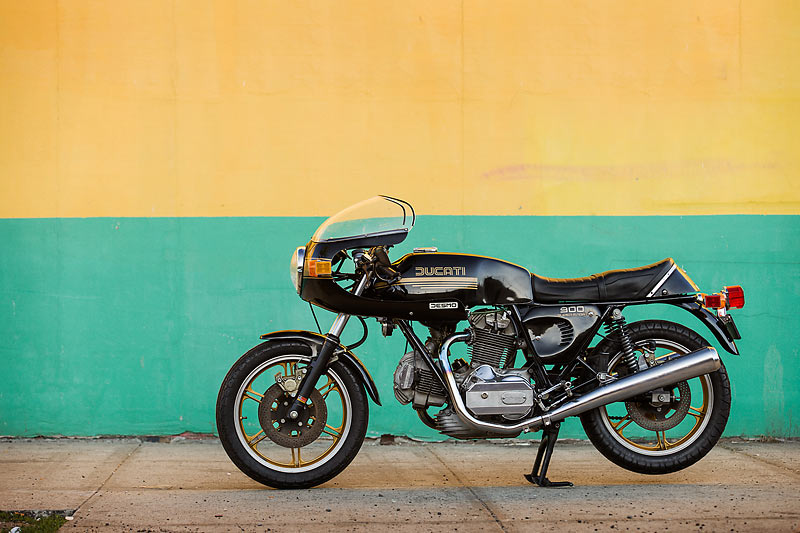 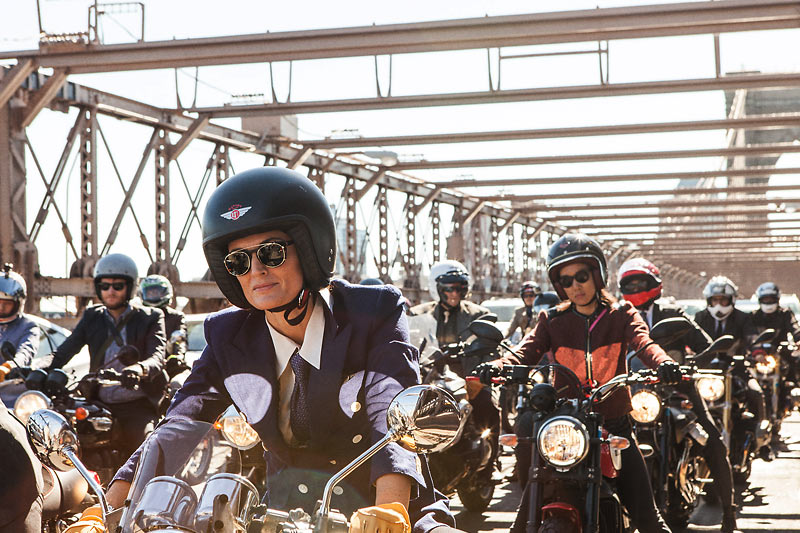 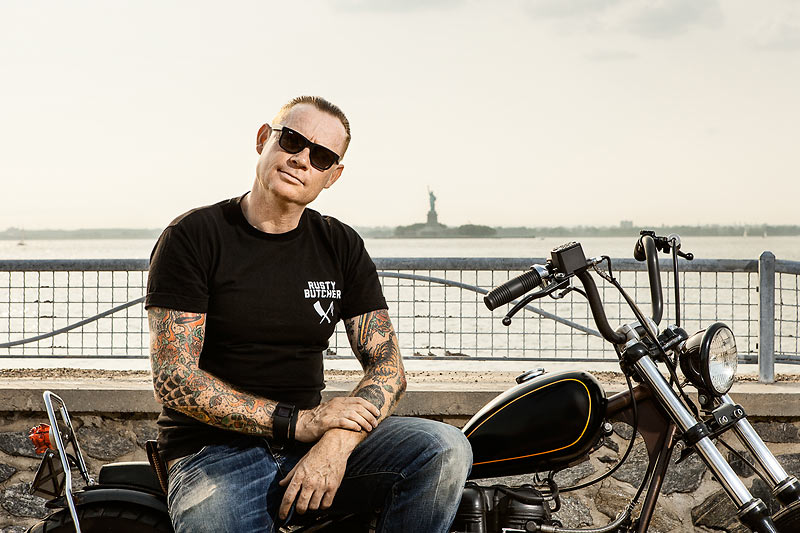 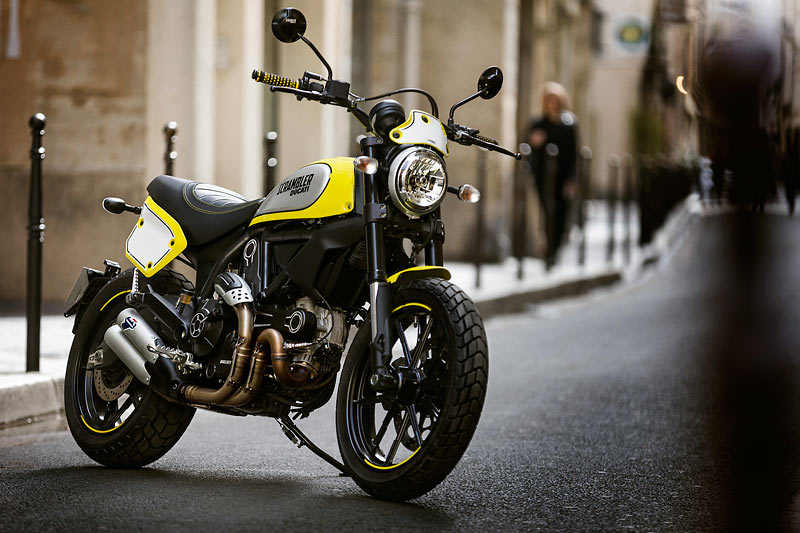 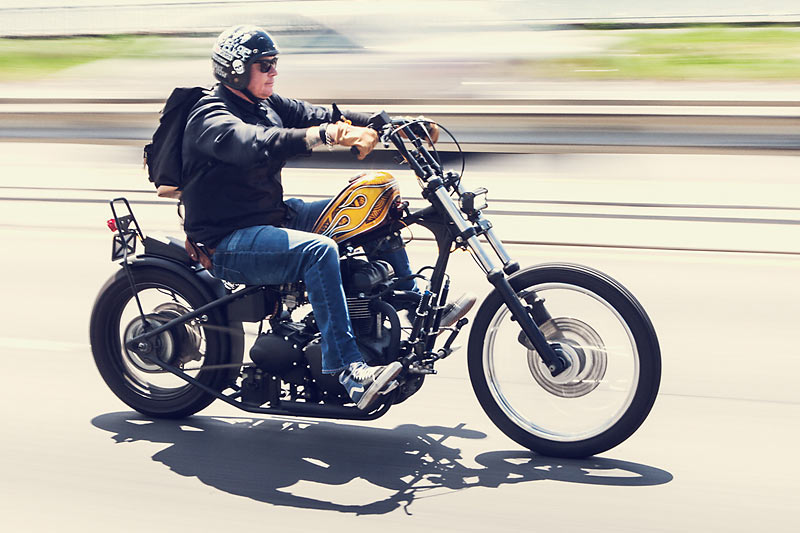 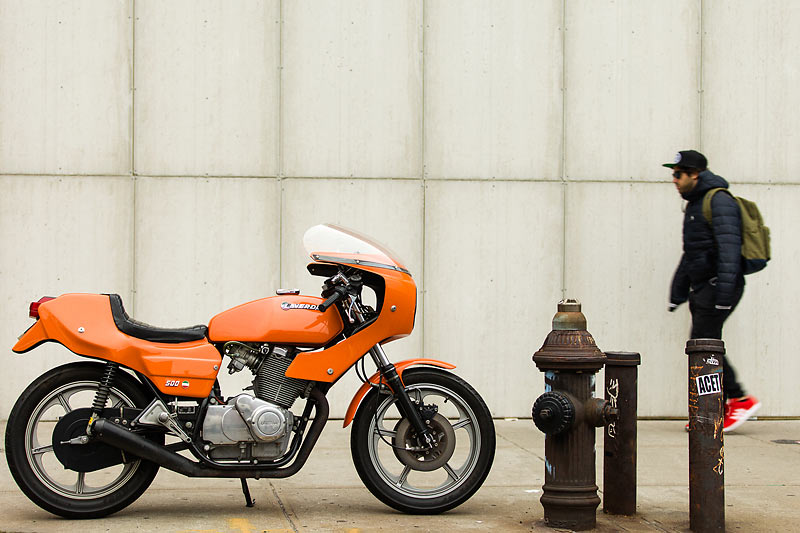 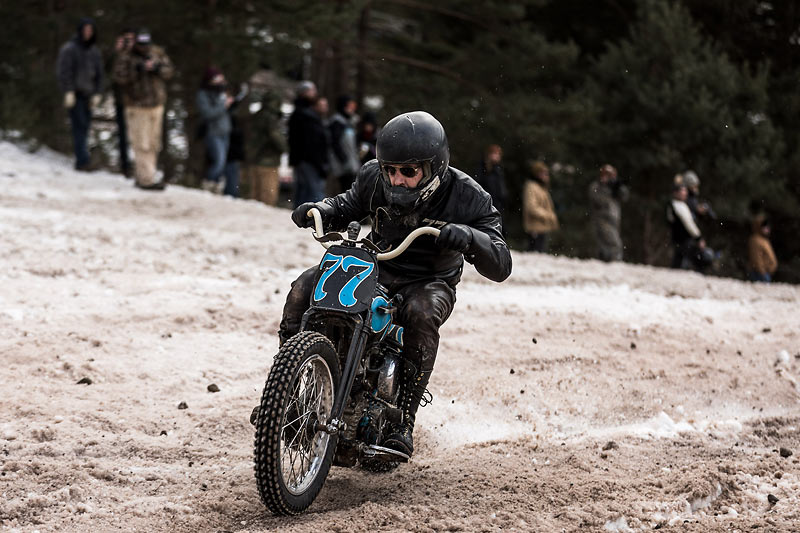 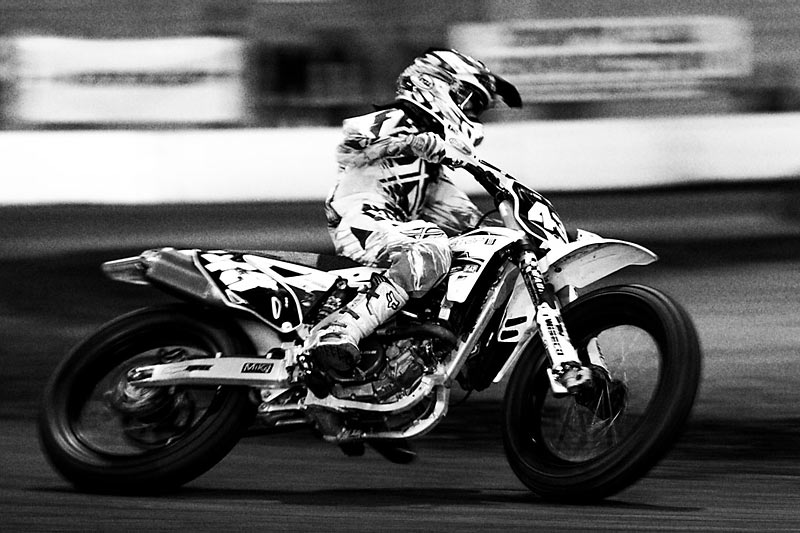 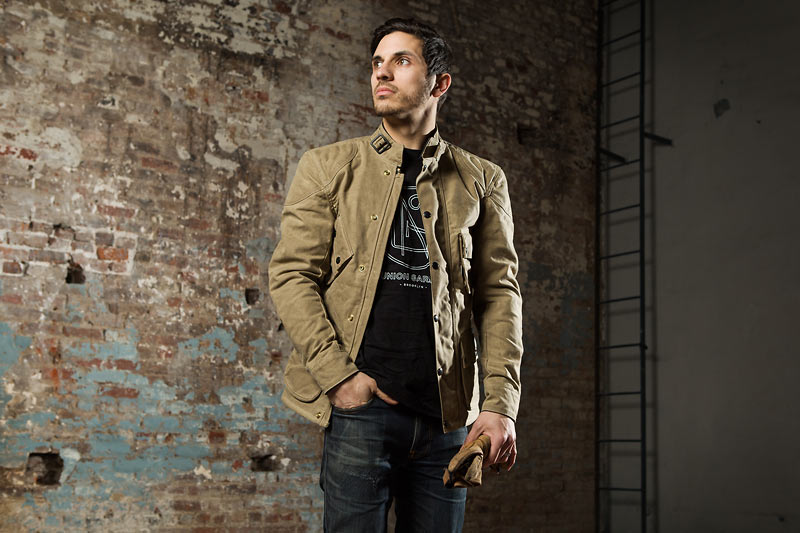 In our first of many features highlighting some of the bright sparks in the NYC Moto community, we talk with acclaimed shutterbug Ryan Handt, his style and photographic inspirations … and his fascination with motorcycles. The 35-year-old native New Yorker’s work covers the gamut from high end marketing shoots for the likes of Belstaff and Union Garage NYC to more journalistic ventures documenting every element of the local bike scene: events, builders ... and the incredible bikes they produce. You may have even had your portrait taken by him during last year’s Distinguished Gentleman’s Ride when he set up at Union Garage. For Handt the devil is in the details, whether its maintaining his distance from subjects to capture a scene authentically or pouring over images in post to make sure the color is absolutely perfect.

1) Which came first for you as an interest … motorcycles or photography?

It would have to be photography. I’ve been shooting since I was 14. I started taking photos of my friends skateboarding after I broke my foot on my own board and fell in love with the medium almost immediately.

2) How did the two interests finally come together?

I enjoy shooting the things I do, whether it be skateboarding, snowboarding, motorcycles, surfing, traveling, etc. Professionally, I’ve shot skateboarding in the past and now focus most of my attention on motorcycles. It’s been a long time since I shot skateboarding for a client. I still love shooting my other passions. If something were to come up involving any of those pastimes, I’d gladly jump at the opportunity to shoot them.

3) How long have you been riding and what was your first motorcycle? Do you have an interest in a particular style of bike and why?

I started riding in 2009. My first bike was a 1991 Suzuki GS500E. The thing was nothing special, but it always worked and taught me a lot about riding. I truly love all kinds of bikes. They all have some sort of appeal, whether it’s speed, creativity or brutality. There’s something in each bike for a different day. If I was to pick a favorite genre, it would be vintage bikes. The designs of modern motorcycles are starting to come around, but those of earlier generations have more style and beautiful lines.

4) I noticed you’ve worked for a number of NYC moto institutions … Union Garage, NYC Motorcycles, Keino Cycles, the Motorcyle Film Festival … how would you describe your style of photography when it comes to covering the NYC Moto scene?

That’s tough to answer. When I shoot for builders, I tend to get really into the details of the bike and figure out where I think the bike belongs in the city. How it should interact with it. When it comes to events and the ‘scene’, I like being a fly on the wall usually. I like to catch moments that are undisturbed by the knowledge of a watching eye. I enjoy the people. We love motorcycles, but we hang around because of the people. 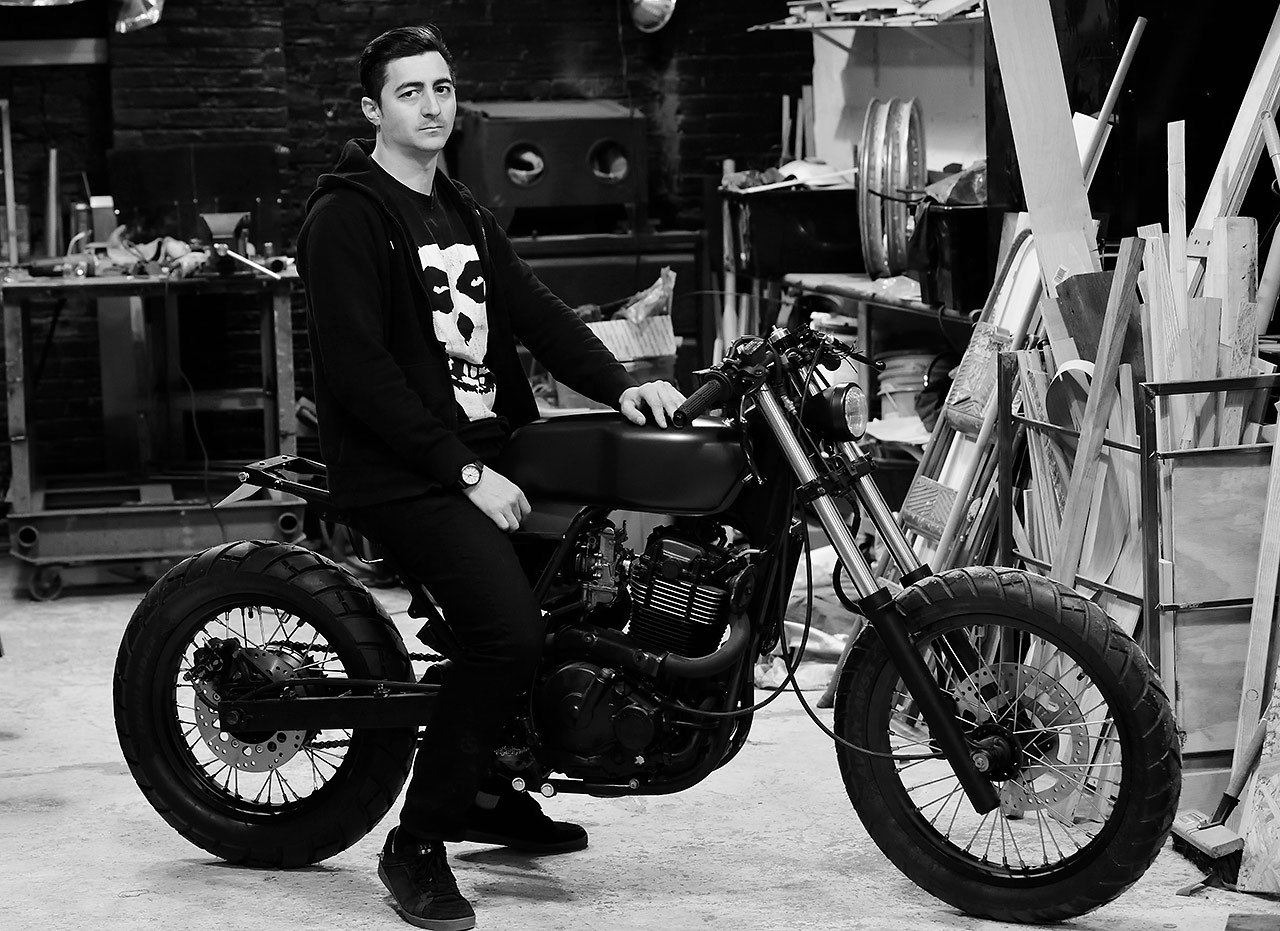 If I was to pick a favorite genre, it would be vintage bikes. The designs of modern motorcycles are starting to come around, but those of earlier generations have more style and beautiful lines.

5) What format(s) do you shoot? Studio or natural light? Color or Black and White? Staged or photojournaistic?

I shoot all sorts of ways. These days, I usually always shoot 35mm digital, but at times I’ll bring out my Mamiya RZ67 medium format or any number of my stockade of old, antiquated cameras. Lighting depends on the situation. Sometimes the light that’s there is all you need. Sometimes, you need to help it out. I enjoy shooting in both black and white and color, but I tend to do more in color. Just like the light, where I’m shooting staged or not depends on the situation. I feel comfortable doing either though.

6) You studied at Otis College of Art and Design and the School of Visual Arts … what was your focus?

Photography. Pretty much just photography. I did some screen printing and some web design stuff as well, but that was most of it. When I was in school, the main focus was film and darkroom printing. Digital didn’t become a possibility until I was just about out of school.

7) What photographers are an influence on you and why?

There are a lot of favorites out there: Philip-Lorca diCorcia, Taryn Simons, Gregory Crewdson, Henri Cartier-Bresson, Richard Avedon, Brassai, Andreas Gursky, Jeff Wall, Rineke Dijkstra, and Mary Ellen Marks. These are photographers I studied and dissected. Their work pulls at me for different reasons, some for their conception, others for their technique. I always found that photographs with a deeper story than what you’re looking at appealed to me more. This is not to say that a beautiful photograph cannot be great. I don’t believe my motorcycle photography has some deep meaning that can be extruded from it. There are also my contemporaries that I enjoy: Aaron Brimhall, Mikey Revolt, Matthew Jones, Kareem Black, Eric Weeks ... There are too many to name and I’m bad at names.

8) What’s your favorite motorcycle shoot to date and why?

That’s tough. They all have their appeal, but if I had to pick one, it would be the Ducati Flat Track Scrambler in Paris. It’s not my favorite bike I’ve shot. Not even close. That would be Keino’s Widow Jane bike or Moto Borgotaro’s Guzzi Apollonia. The Duc was simply my favorite as it allowed me to ride around Paris for a week and shoot it at my leisure. I love Paris.

9) On the motorcycle side you’re putting the finishing touches on a bike build at Craftsman Ave (where you’re a founding team member). Tell us about the bike … details of build, how long it took, what it entailed. Is this your first build?

The bike is a 1991 Suzuki DR650. In May of 2015 I was riding the bike, on my way home from a shoot, in Red Hook. After pulling away from a light, a woman made an illegal U-turn in front of me and I went over the hood of her car. The bike was deemed totaled, but the insurance didn’t want to take it, so they let me keep it. It sat for a long while, during my fight with the insurance. At a certain point I started thinking that I should do something with it. First, I was just going to make it into a dirt bike, but after talking with a friend of mine, we decided it would be fun to make it into a ‘city killer’ bike … something you don’t worry about, something that eats potholes and hops curbs when needed. Thus spawned the build idea. We got underway in October of ’16 and it’s still a work in progress. We’re about 85 percent of the way there. I hit a busy patch of work and the bike has been neglected since New Years pretty much. It’ll get done soon though.

As for what we did ... We stripped it down to the frame, cleaned it up, painted the frame, trimmed off some excess, got new rims – 18 rear with a 19 front, powdered the rims and hubs at Arcane Moto, new stainless spokes from Buchanan, new front end to replace the busted forks, new clip-on bars, an RD60 tank, battery box/tank mount, new gauge, will have a custom seat, all the blinkers and what not ... Hard to remember it all. There is a ton of powder coating and it was all done by Arcane. They’re fantastic. Even had my tank powdered. It looks amazing.

First, I was just going to make it into a dirt bike, but after talking with a friend of mine, we decided it would be fun to make it into a ‘city killer’ bike … something you don’t worry about, something that eats potholes and hops curbs when needed. Thus spawned the build idea.

10) Tell us about the Craftsman Ave studio and the artist/builders community it serves.

Craftsman is not a motorcycle community exactly. Craftsman Ave is a place where you can learn hands-on skills, like woodworking, welding, metal smith, etc. Taras Kravtchouk, the man who started Craftsman Ave, is into motorcycles, having built his own customs and customs for Belstaff. He’s been doing a motorcycle design class there since the beginning, but it’s not hands on. We’ve been talking about ways to incorporate motorcycles more into the Craftsman Ave because of our love for it. The first hands-on moto class, which followed the build of my bike, was a step to see how it would work as a multi-session class. We’re currently talking about how to incorporate more classes that revolve around motorcycle design or mechanics.

11) What other moto related artists have you collaborated with and/or covered as a photographer? Noticed you shot a bike for Belstaff that included painting details from Brooklyn-based artist Jen Mussari.

There’s been quite a few. I shot with Jen, who does some kickass lettering. The early bikes for Belstaff, that were built by Taras Kravtchouk, had her lettering handiwork. I’ve worked with Moto Borgotaro, Union Garage, Keino Cycles, New York City Motorcycles, Larry Au, Corinna Mantlo, The Distinguished Gentlemen’s Ride, VinMoto, etc.

12) Is the moto-artist community quite tight knit?

I believe so. The moto community itself seems pretty small. If we don’t know each other, one of us knows someone in common. We all seem to be looking out for each other. Sometimes we work, support charities or run events together. The Vin Moto show every summer is a good example. People volunteer their time to help make it happen.

13) It's getting close to spring ... Do you think the seasonal nature of riding in NY has an impact on the community?

Yes, it does. Maybe that’s just me personally, but we see each other less in the cold. That’s why when there’s some sort of motorcycle-related event in the winter, it’s a large turnout. Everyone is all wintered out and wants to escape. There’s still stuff to do here in the winter. Some people take up ice racing, which is a ton of fun ... or you start a project bike at a community garage. Spend the winter building. It makes you appreciate riding more, when you can’t do it every single day.

14) Who do you see as some of the influencers in the local community?

That’s a tough question. There are so many people who make the community what it is. Corinna Mantlo, is one. She is one of the founding members of the Miss-Fires, a seat maker, and she has a hand in almost every event happening in or around NYC. Keino Sasaki, being one of the founders of the Brooklyn Invitational, helped create an event that draws people from all over to enjoy the custom scene. And there’s Union Garage, which offers up events that aim to broaden our horizons into the other worlds of motorcycles. We’ve seen them do ass crack of dawn rides and events focusing on women’s riding gear, with Trazy Motz of Revit, giving us an idea of what it means to be a real motorcyclist.

15) Finally, how would you define what you do and who you are in five words?

I am a photographer, a capturer of light. Five words ... Artist, Friend, Introvert, Dreamer, Dork. 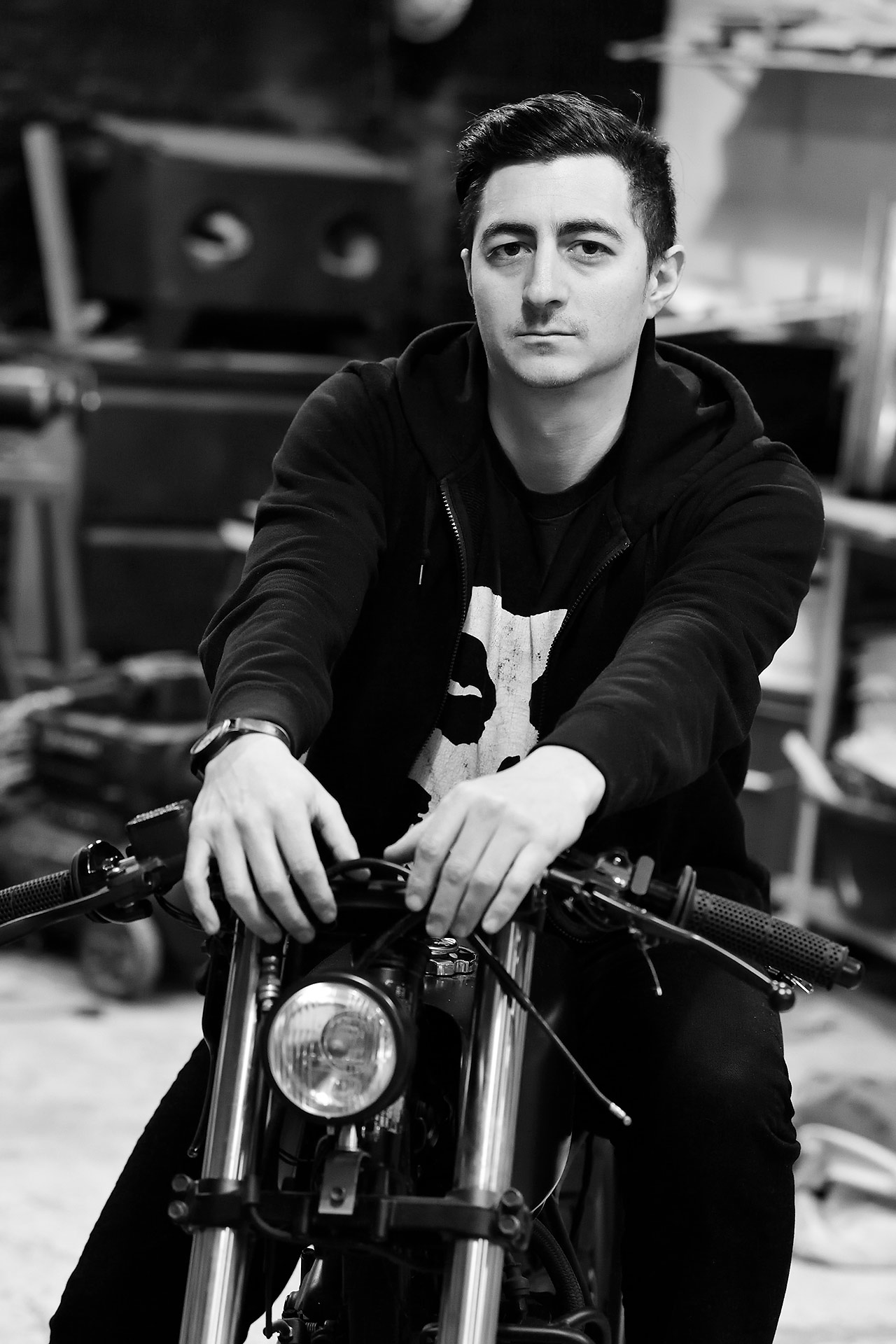 You can find more of Ryan Handt's work in his NYC Motorcyclist gallery ...
or on his personal sites online at: