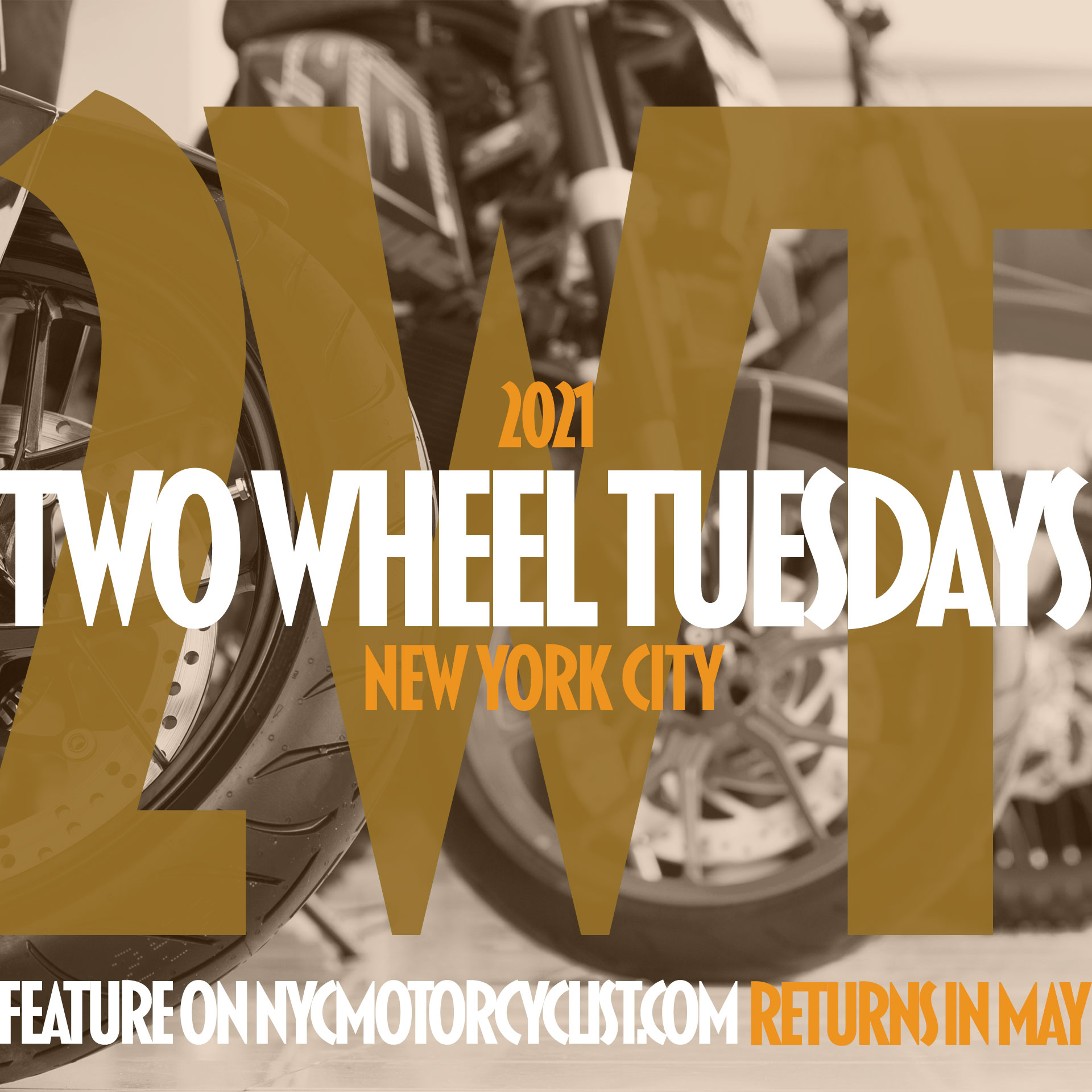 We originally met Shmulik Avital more than five years ago outside Jane Motorcycles – before NYC Motorcyclist became a standalone website – and were immediately struck by his enthusiasm for moto sports and the city. The rousing endorsement by Jane owners Adam Kallen and Alex DiMattio of Avital as someone “you need to know” in the Big Apple also stuck with us. So, this feature is long overdue. Celebrate Spring riding with Shmuel.

The event is really for all bikes and all bikers, free of ego and attitude, and I think that’s what brings people to these meetings. I think it’s something that was missing from the city. Personally, I have met so many incredible people through (2WT), and I think it has really spun itself into a supportive and creative community.

Celebrating its seventh anniversary this spring, Two Wheel Tuesday will take things up a gear in 2021, partnering with Cine Meccanica on several outdoor film nights in NYC for the local moto set.

“The first week of May we plan on officially starting this season,” says 2WT founder and moto aficionado Shmulik Avital. “I believe this season is going to be such a win … a win for the city and for the bike community.”

Avital will team up with Corinna Mantlo – of The Motorcycle Film Festival, Cine Meccanica and The Vintagent fame – on the concept, one that had an initial run last season with several moto meetups at Brooklyn’s Skyline Drive-In NYC along the East River in Williamsburg.

“We plan on having a season opener party and a few more very interesting events that it’s too early to talk about,” he said.

Avital, now 48 and originally from Israel, first started 2WT as a moto meetup at the now-closed Spiegel Restaurant at 1st Ave and 2nd St in Manhattan, after seeing a need for a gathering that felt inviting to all motorcyclists, regardless of bike types, ethnicity, gender or even riding experience.

“When Sept 11 happened, I really felt like I was a part of the city,” he said. “Going through the tragedy, recovery and the healing after such a disaster really attached me to this place.”

“I used to go to a motorcycle gathering every Tuesday on the West Side at the Ear Inn, but it was not such a friendly or open environment,” says Avital, who came to New York more than two decades ago after a stint in Philadelphia, where he had run a coffee bar. “The (Ear Inn) treated bikers as a burden and there were tons of cliques within the biker groups that weren’t welcoming at all. It was a weird environment to be in … they were not the kind of bike people I knew.”

While sitting outside Spiegel, Avital hatched a plan with friends Mark Heckles and Stephen ‘Elmer’ Caison to create a new Tuesday meetup at the East Village locale.

“Mark and Steven are well known and respected in the bike world, so they brought their friends, I brought mine, and we had our first event. There were about 20 other bikes at the first meet-up, but when the word got around new people started to come, and it kept building from there. The New York Classic Riders, Motofellas, Gotham Ducati and Los Pepes were just forming around that time, and it was a blast to watch them evolve.”

“The event is really for all bikes and all bikers, free of ego and attitude, and I think that’s what brings people to these meetings. I think it’s something that was missing from the city. Personally, I have met so many incredible people through (2WT), and I think it has really spun itself into a supportive and creative community.” 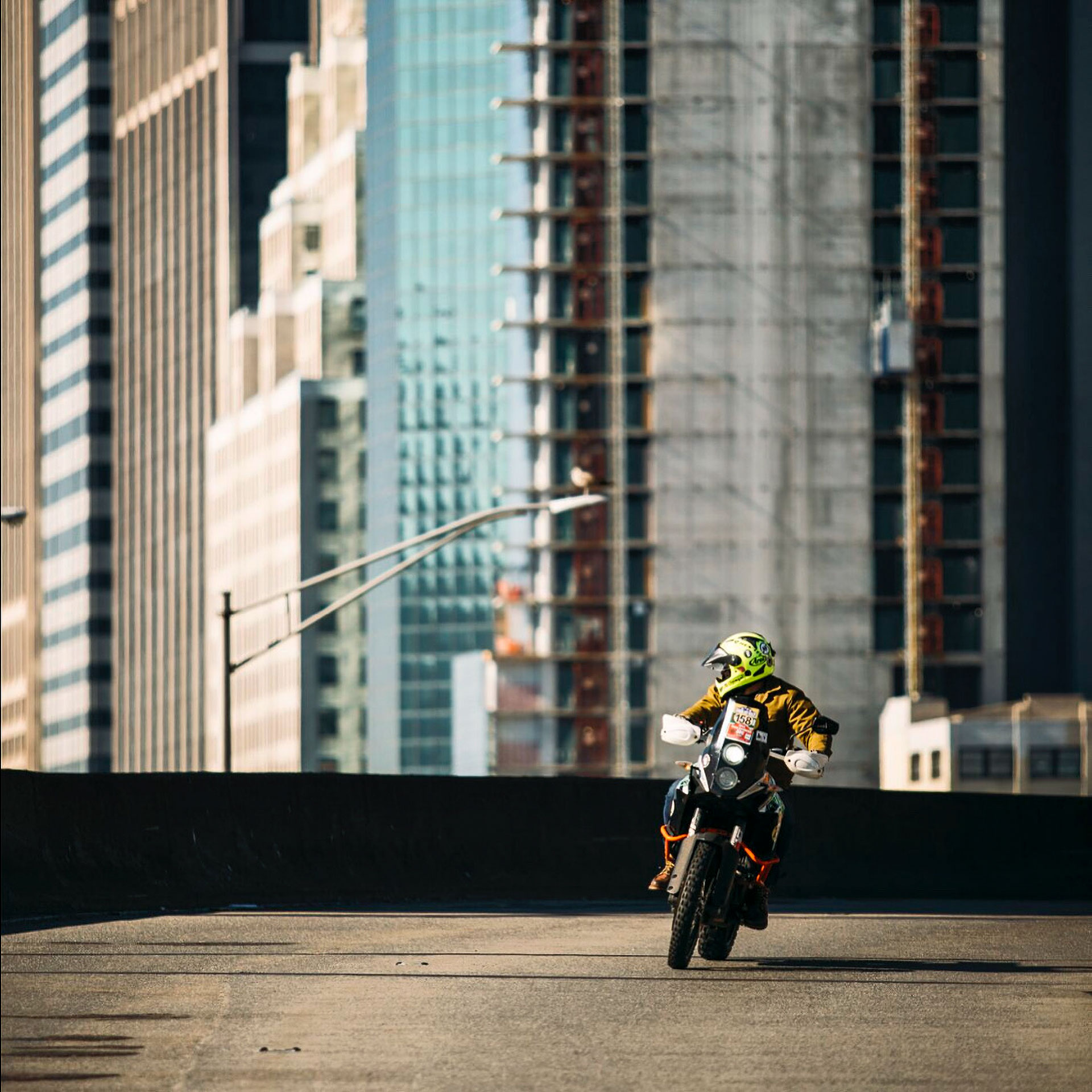 My go to bike has always been the KTM Adventure. I wanted a bike that I can ride to the coffee shop one day and Panama the next … a bike that will be safe on the road, and that can also cross a jungle.

Avital himself started riding in Israel in his late teens and progressed from BMX bikes in the ‘80s to his his first Harley when he came to the US.

“But I’ve always be drawn to the off-road adventure side of riding. My go to bike has always been the KTM Adventure. I wanted a bike that I can ride to the coffee shop one day and Panama the next … a bike that will be safe on the road, and that can also cross a jungle.”

It’s a moto spirit that defies traditional city riding, adding a measure of off-roading creativity to the year-round two-wheel commute.

“It’s the best way to get around: Less traffic, less pollution, and of course, you can park easily. My favorite route in the city is (one) I haven’t taken yet,” Avital says. “I love finding new ways and short cuts to get around. I recently even discovered a short cut through an underground parking lot.”

That creativity and ingenuity came into play last year when the COVID-19 pandemic not only forced the cancellation of many events, but also ended up closing numerous local restaurants and businesses, including the popular Spiegel eatery. That said, a new locale had been in the plans.

“Having 150 bikes gather at a busy street in the East Village created some tension between me and the community board,” Avital said. “Let’s just say, they didn’t see things the way we do. They didn’t appreciate the value of the event, nor did they see it for what it really was. They had the stereotypical fear. It was a constant struggle for acceptance, and when COVID happened and Spiegel closed I had to look for a new location for the event, one that would ideally be away from neighbors with motorcycle fears. Riders were coming out of winter and wanted to meet and have a place to ride to.”

First up Avital struck up a partnership with Ryder’s Alley in Williamsburg, cognizant that a larger outdoor location was needed to meet COVID-enforced social distancing and mask health mandates.

“I found Damian and Alexey, who welcomed the event into their location, which was such a sweet spot, right over the bridge in Brooklyn with a sunset view over the river.”

Brooklyn’s Motorgrrl Garage also found its way into the mix, before Avital found his ideal space.

“I met a friend through Jeep off-roading named Souf, who works at the Skyline Drive-In. After an interview with the owner, we started showing up every Tuesday at the Skyline. It is the perfect location, right on the water with a view of the city skyline; the huge open lot is a motorcycle meet-up dream.”

Expect more of the same this coming season. 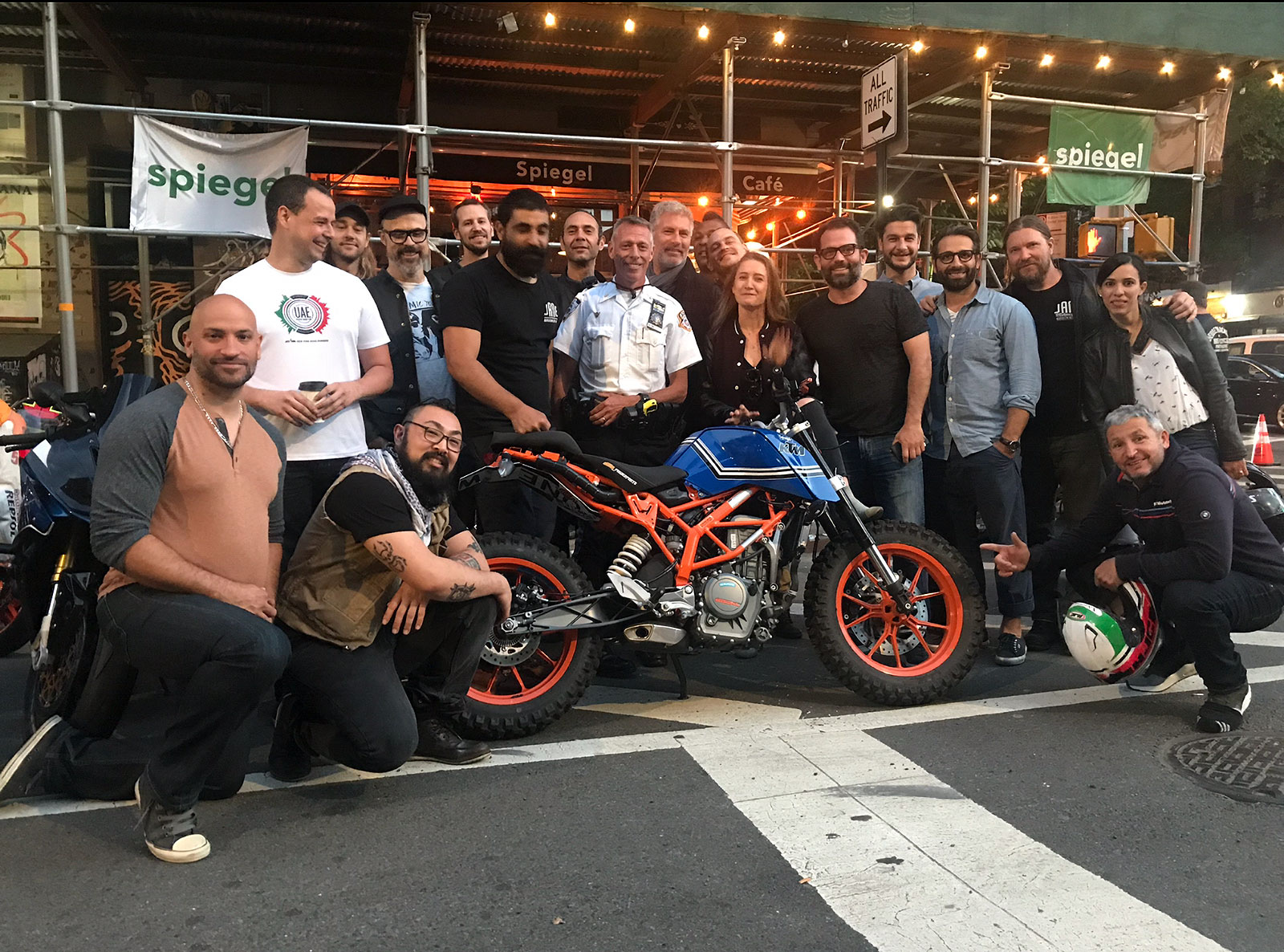 We need enough people to ride so we can get to the tipping point where bikes are not feared and are used regularly. They are good for our mental health, for the environment, and for reducing congestion in cities … and I’m sure so much more.

Community is especially important to Avital, and he sees a lot of potential in the local moto movement.

“I truly believe that motorcycles can be an answer for so many things. It’s a revolution that needs to happen. We need enough people to ride so we can get to the tipping point where bikes are not feared and are used regularly. They are good for our mental health, for the environment, and for reducing congestion in cities … and I’m sure so much more.”

“But we are not united enough in that fight. I admire the New York Motorcycle and Scooter Task Force, Lauren Secular and Cheryl Stewart, for fighting that fight. I wish we all did a bit more.”

Over the past seven years Avital has seen positive steps though.

“The change I notice the most over time are how many more people have got into riding, and a lot of those riders are women, which is so incredible. I’ve also noticed so many people that I have known as riders have made motorcycles into their main occupation.”

Even the community’s response when Avital’s own ride was stolen off NYC streets instantly demonstrated the power of a group united by a single interest.

“Living in the city, comes with challenges, but it has proven that with a little help from your friends, you can get by and get your motorcycle back,” said Avital, who has since reciprocated the favor on several occasions. “Seeing how many people were going through the same struggle with losing their bikes just inspired me to use my connections and help others. Seeing how powerful and efficient it was to use the community, drew me in.”

For more information on upcoming Two Wheel Tuesday events and the opportunity to meet your fellow NYC moto enthusiasts, follow @ride_more_talk_less on Instagram. Events this season will still require social distancing and masks to maintain a healthy environment for all. 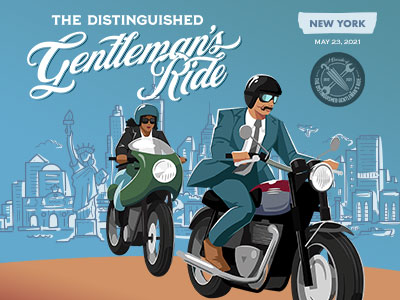 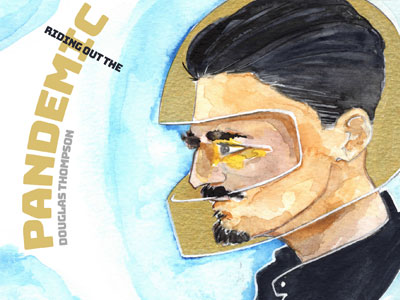 Riding Out the Pandemic

Taking Care of Yourself & Your Circle 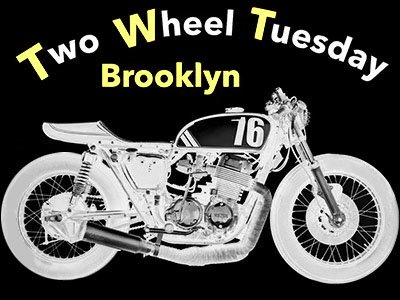 A weekly motorcycle gathering in and around New York City, every Tuesday during riding season. All bikes welcome. Details announced every week on Instagram @ride.more.talk.less.

A classic cult film series, hosted at local NYC watering holes, and now online as a Facebook web stream ... with a mandate to bring people together and support amazing but struggling local venues and their staff, while not just complying with, but embracing safety restrictions. 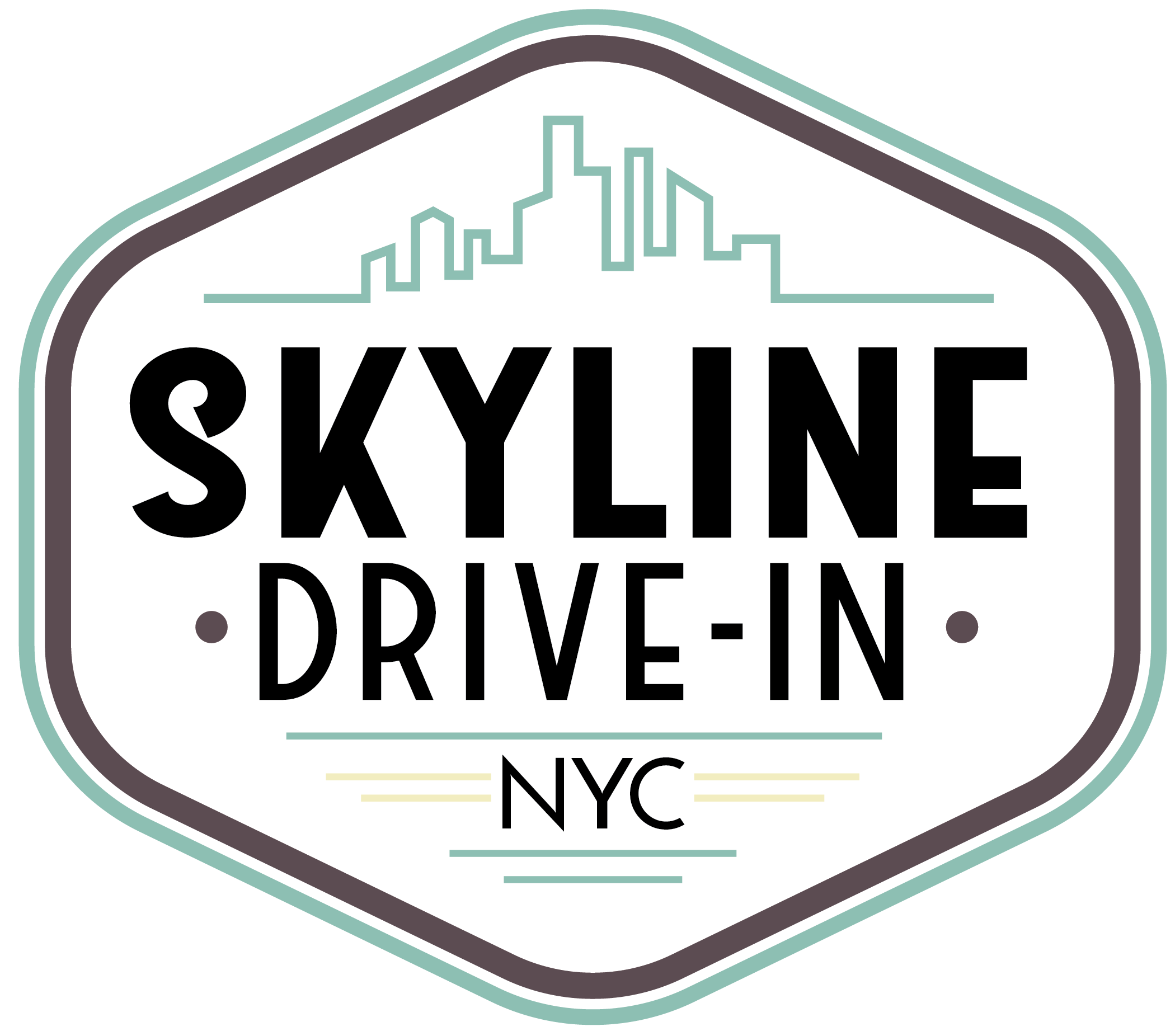 Located in Williamsburg at 1 Oak Street, Skyline Drive-In NYC is a unique drive-in cinema experience situated on the East River with killer views of the Manhattan Skyline.