Out of Nothing gets American release

"It’s become a sensation because it’s filled with people that are true enthusiasts. There’s no money, there’s no real fame or fortune. You just do it because you have to do it,” says Dennis Bub Manning, the world’s fastest motorcycle, four-time record holder. “Bonneville is not a word … it’s a feeling, it’s an emotion, it’s this thing, it’s this challenge.”

Enter goosebumps …. A true feeling that there’s an experience moto enthusiasts have to add to their bucket list … Chad DeRosa’s film Out of Nothing hits deep into the speed junkie’s heart.

For me it’s not a new thing … I can honestly say I’ve watched The World’s Fastest Indian – documenting the trials of Kiwi racer Burt Munro – dozens of times … and each year I have a small group of friends who attend Bonneville almost religiously, leaving me with pangs of jealous admiration. I’ve even made the trek to Invercargill, New Zealand to see Munro’s 1920 v-twin Indian Scout firsthand, to touch a piece of history.

Out of Nothing (Running Time: 1:33:27) – which recently premiered in Los Angeles at the Lamelle Theaters in Beverly Hills – features the interwoven tales of four tenacious Pacific Northwesterners who risk everything to conquer the world records of motorcycle land speed racing on Utah's Bonneville Salt Flats. It’s history in the making. 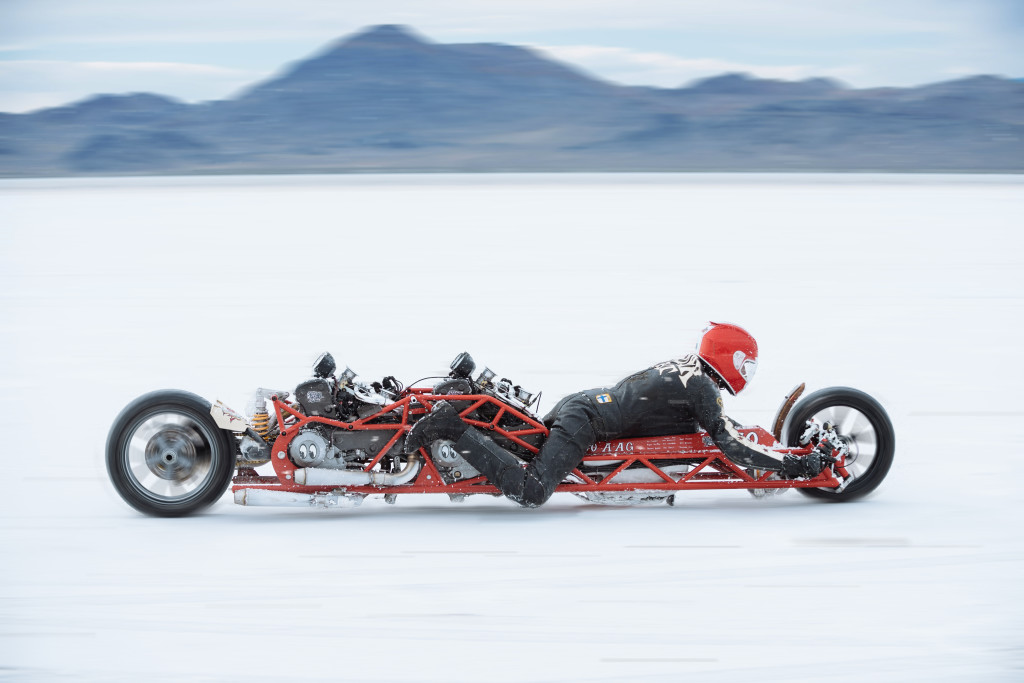 Promo image — Out of Nothing

Bonneville is not a word … it’s a feeling, it’s an emotion, it’s this thing, it’s this challenge.

Brothers Mark and Carl Bjorklund, Jason Omer and Bill Woods work together to battle numerous mounting obstacles – financial hardship, family issues, anxiety disorder, in-team conflict, severe weather, and hundreds of other racers – all while attempting to set records at breakneck speeds on their own homemade machines.

But what hits home immediately is the story involves real people, with regular daytime jobs, pursuing their moto enthusiasts’ dream. That is as simple as Mark Bjorklund literally pouring concrete for eight hours and then hitting the shop to work on a bike until 2 AM in the morning … seven days a week.

They’re “doers, not talkers … the perfect storm for Bonneville.”

“We’ve all gotten good at building something out of nothing because that’s what we do at our job,” Mark Bjorklund says in the film. “We show up to a dirt hole. There’s nothing there but set up strings. We leave and there’s a big structure there. Same thing when we walk into an empty garage. After a year there’s this machine there … out of nothing.”

The group work on four bikes: Yamahaz, which features an all-aluminum chassis and two 85 cc engines coupled together; Nosferatu, a rear-engine, lay-down bike designed on a computer with fiberglass bodywork; Godspeed, a 1998 CR 500, two-stroke, single-cylinder motorcycle; and The Ducati, a race bike wreck that has been gathering dust on a workbench for three years … it’s laid out like an early ‘70s drag bike … bare minimum, no fat tires, no fiberglass or streamlining, just raw and elementary.

The bikes are built for pennies on the dollar because the foursome use each other as resources, they work together and build everything by hand. In fact the team spends their budget on the bikes, leaving little for the trek to Bonneville, and nothing for hotel rooms or the trip back. The quartet quickly learns that leaning on one another for help and resources is essential … “a team of guys you depend on and need to be successful.”

The hallowed ground known as Bonneville – basically a salt layer on top of mud and one of the flattest places on the planet – and its moto community are the fifth unnamed lead character in the documentary. The majesty of the salt flats is never more evident than in the film’s pre-race and race footage – drone sequences from above, the rider’s perspective, time lapse and a truck mounted follow cam capture the 46 square miles of salt with 11 miles of it groomed for the simple feat of setting land speed records. 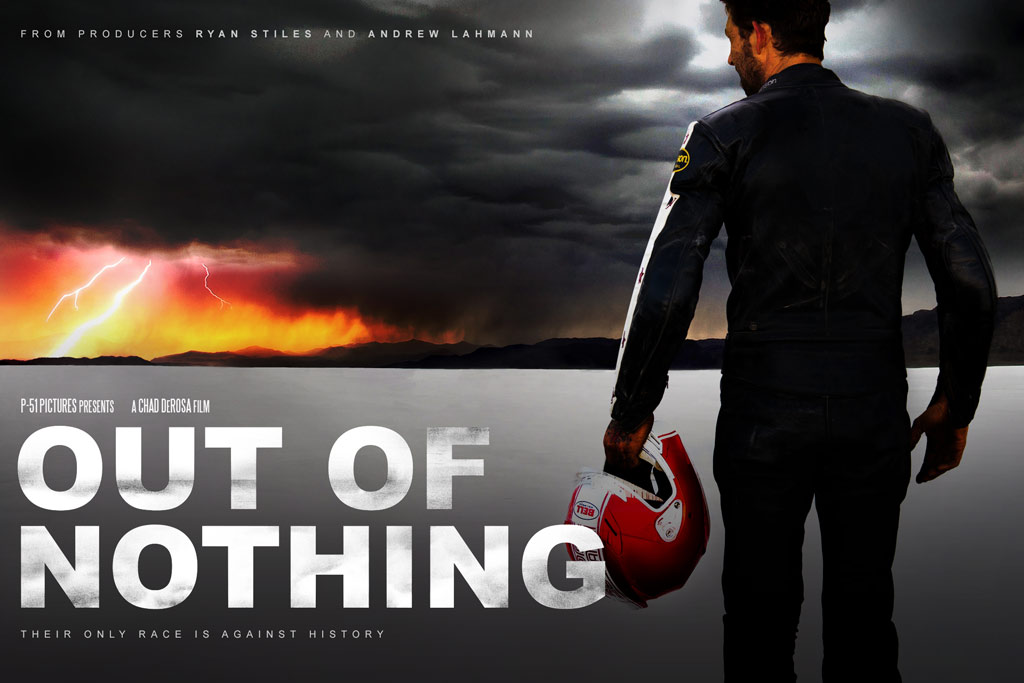 Promo image — Out of Nothing

We’ve all gotten good at building something out of nothing because that’s what we do at our job. We show up to a dirt hole. There’s nothing there but set up strings. We leave and there’s a big structure there. Same thing when we walk into an empty garage. After a year there’s this machine there … out of nothing.

The annual event attracts bikes that will go anywhere from 50 to well over 400 mph, vintage bikes from the ‘40s ‘50s and ‘60s to modern, state-of-the-art, computer-controlled bikes … and riders from as young as 14 to seasoned veterans in their 70s.

There are five-mile and 11-mile courses, each with a timed mile section in the middle. If your initial timed run exceeds the established record, the rider qualifies for a return run on the same course on the same day in the opposite direction. If the average of the two runs is better than the existing record, the racer is awarded a new AMA class record. The environment and the challenge inspires what has often been dubbed ‘salt fever.’ It’s a mythical place that gets into the hearts and souls of riders, enticing them to come back again and again to face their deepest demons and attain the ultimate proof of self.

For the Out of Nothing foursome the speed event brings out all sorts worries: how will a bike that has only five miles on the odometer fare when its pushed past 150 mph for the first time; how do you deal with wearing full leathers when you’re claustrophobic; and how do you deal with extreme weather postponing and possibly cancelling your runs after a year’s worth of work and preparation.

Then there's the incredible Bonneville community … sharing stories … providing a sense of family and camaraderie, whether it’s encouraging your direct competition or sharing parts when they’re needed. It’s an old-school philosophy sadly lacking in many other environs in life today.

“We’re all brothers and sisters, we belong to a community,” is the binding force which sees classes not determined by age or gender, but simply by riders.

Does the Out of Nothing group break records? You’ll have to watch to find out. What I will say is the journey is something to be experienced on a large screen. Watching a speedo needle go past, and stay past, its 160 mph max, at 9,500 rpm, “milking it for every mile per hour you can get”, is heart-thumpingly satisfying.

Theatrical screenings of Out of Nothing are crossing the USA over the next several months, with select showings featuring cast and crew in person. Dates and locations will be announced on the official Facebook page. DVD and Blu-ray sales hit the market in November. And the digital HD release is now available on iTunes and GooglePlay. The film’s American debut comes following its release in 20-plus countries around the world.

The film is produced by Ryan Stiles & Andrew Lahmann and distributed by Uncork'd Entertainment.

Out of Nothing Links: