Transition through NYC life with Kynsho 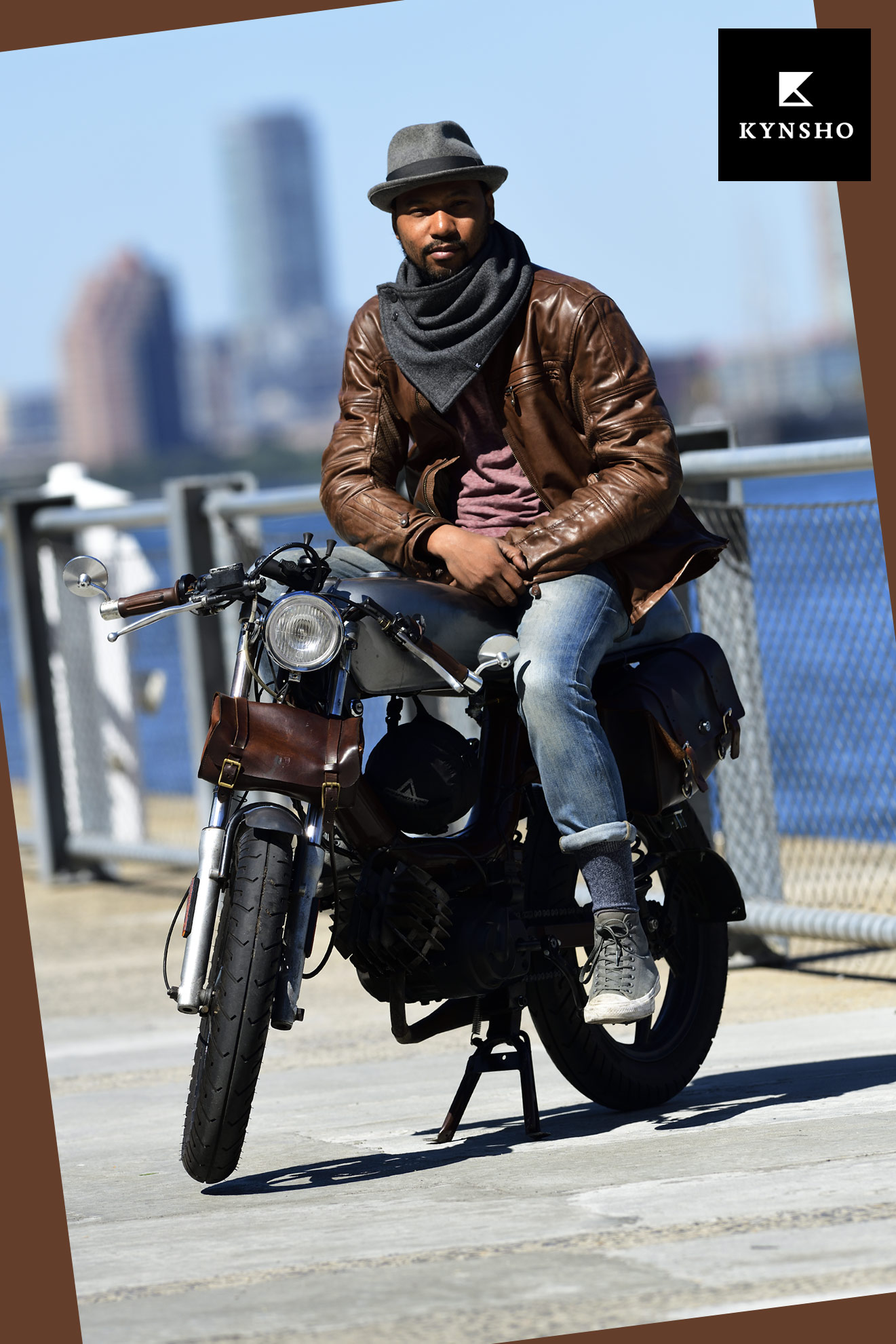 With the Distinguished Gentleman’s Ride nearly upon us, it’s time to dapper up the ensemble.

Though, in New York City that’s par for the course, with commuters choosing outfits based on their ability to smoothly transition from the F-line to the boardroom … from a scooter ride through Manhattan to an interview … and from a day’s work to an evening cocktail event.

Enter George Crichlow, founder and CEO of Kynsho, a Brooklyn-based firm that designs practical accessories with smart details and an enduring style.

The company — a prize sponsor and part of the NYC DGR’s locals’ tent at the start and finish of this year’s charity ride, Sept. 29 — launched its signature crossover cowl last year and has a waterproof version slated for release this winter currently on Kickstarter.

The concept is a simple ‘less is more’ one with many variations: a rectangular swatch of herringbone wool – with an itch-free fleece lining and four snap options — which folds into a cone-like neck warmer and fits any neck size. The product was designed and is produced in Brooklyn, one of those pieces that matches almost anything in your wardrobe.

“I wanted something that can transition seamlessly for whatever you want to do in life,” says Crichlow, a strategy director by trade. “My job is to understand people and their behavior, and then make products and services based off those observations. So, I’m applying that to myself.”

The 38-year-old Queens-born visionary made a life transition himself more than a year ago from office worker to full time entrepreneur to pursue his idea of a line of accessories suited to the person on the go. 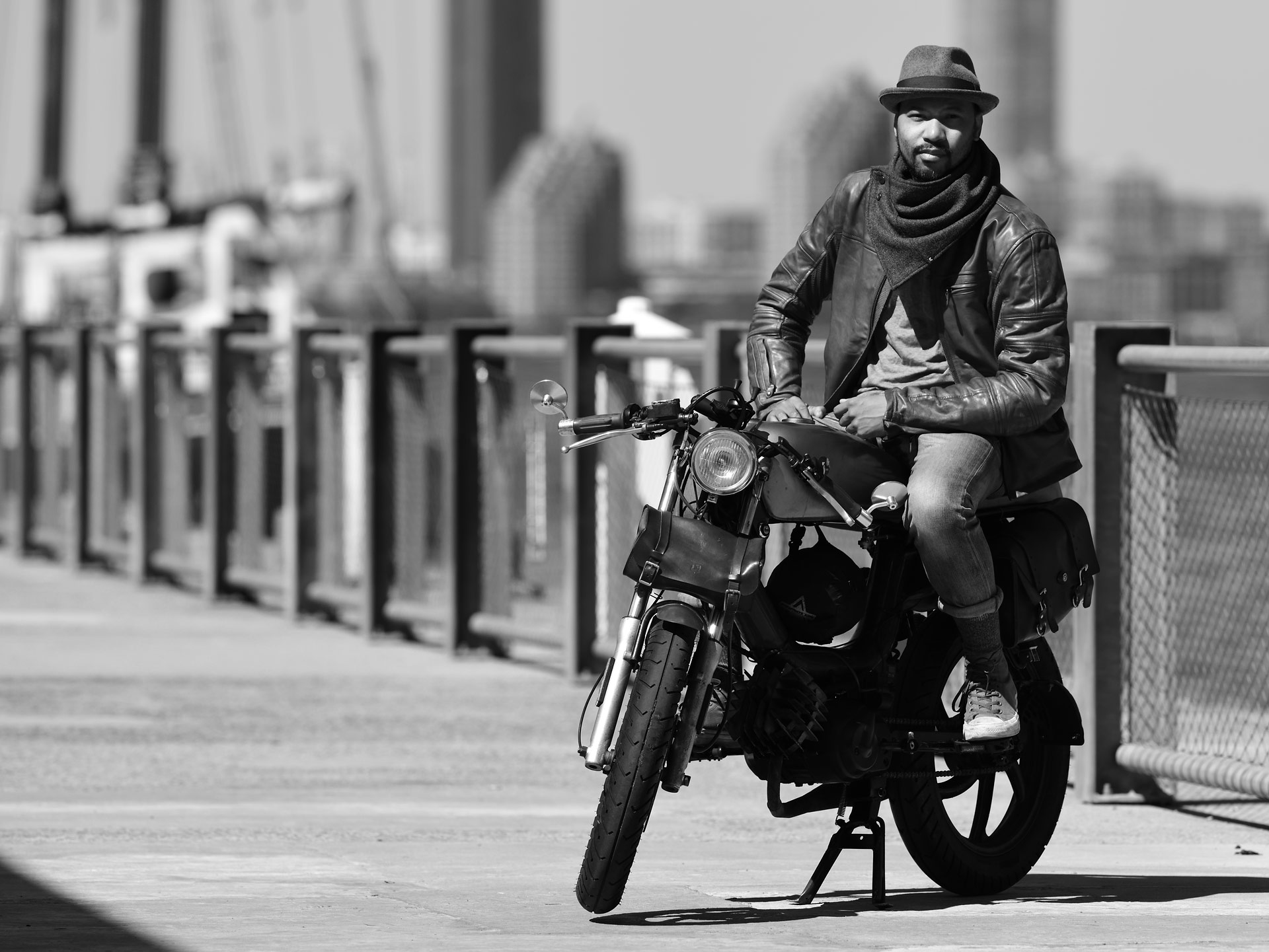 The product's simplicity is 'black and white', its greatest strength — Rahoul Ghose

It is this moment when one identifies their true calling in life and continually works to realize that ambition. I like the idea of everyday essentials, things that really work with you … for whatever you’re doing you just need one thing.

Kyshno, a Zen Buddhist term meaning ‘the pursuit of personal progress’, evolved from a life-learning trip to South East Asia, Thailand to be specific, where Crichlow took in both the culture and observed the simplicity and multi-functionality of clothing pieces.

“It is this moment when one identifies their true calling in life and continually works to realize that ambition. I like the idea of everyday essentials, things that really work with you … for whatever you’re doing you just need one thing,” he says. “That’s the problem with most bike gear … it’s made for bikes, and you can tell.”

In terms of practicality, Kynsho’s crossover cowl was engineered to dry quickly – within 5 minutes — retain heat, wick moisture away, and protect your neck from the elements.

Design-wise, the idea had many inspirations … neck wraps from around the world, motorcycle wear, and even the cowboy sensibility. But the final look literally came down to paper.

“The 'V' is inspired by the cut of a blazer … I wanted something to fill that gap perfectly ... and it actually comes from origami. I took a bunch of classes looking for the way things folded but stayed in place,” Crichlow says. “I looked at the cut of a jacket and thought, 'what would fit that', worked with patterns and forms until it fit, and then I took a traditional scarf and cut it to get rid of excess material ... folding came into play.”

Basically, it was trial and error, but not without a host of background research. Crichlow, after returning from Asia, toured America’s largest textile district in North Carolina, to learn about the manufacturing process and what he needed to do to scale his idea for production locally in Brooklyn.

Why Brooklyn? Apart from his local ties to the area, Crichlow has also embraced the area’s makers community, which helped him to develop the skills he needed to produce his first products.

How to fold and clip the crossover cowl — Rahoul Ghose

The 'V' is inspired by the cut of a blazer … I wanted something to fill that gap perfectly … and it actually comes from origami. I took a bunch of classes looking for the way things folded but stayed in place.

"Pockets of Brooklyn are set up for manufacturing and places that used to be in the garment district (in NYC) are moving to locations like Sunset Park and Industry City,” he said, adding he also works with companies in Greenpoint and Bedstuy.

“I don’t have a designer or maker background, but I have always been around that culture. It’s everywhere here in Brooklyn, people with skills, making something unique. What I find interesting is when you propose something that’s never been done before, the response (here) is: ‘I’ve never seen that … but let’s try it.’ That’s part of the excitement during this whole journey, is I have never done any of it before, and just learning along the way and meeting really interesting, weird, kooky people is part of the fun. And it’s validation, because they want to help me.”

Crichlow’s life course change also led him to develop his own motorcycle, a one-off scooter/café racer hybrid which makes the commute into the city for meetings as seamless as NYC traffic allows.

“The whole idea of the bike … I’m a freelancer … and I wanted the most efficient transportation for the city traveling short distances … something that didn’t cost a lot of money, was easily maintained, didn’t need a license (even though he has one) and something I could make myself.”

After some local welding classes, Crichlow transformed his Slovenia-made Tomos moped into its current 70-mph-capable, low-riding, racer state, with a top frame tank and a host of parts from '70s-era Honda CB250s, including a front disc brake, tires and cast wheels.

“It’s one of a kind, and that process of having an idea and making it … all you need to know about me is in that bike.”

The future of Kynsho lies in a septet of future products, all with the same design philosophy as the company’s crossover cowl … allowing users to travel seamlessly wherever they go.

“To start with I’m going to own the neck … no one owns accessories, especially for men … there’s no specific scarf brand with an emotional connection for people … so it’s a big opportunity,” Crichlow says. 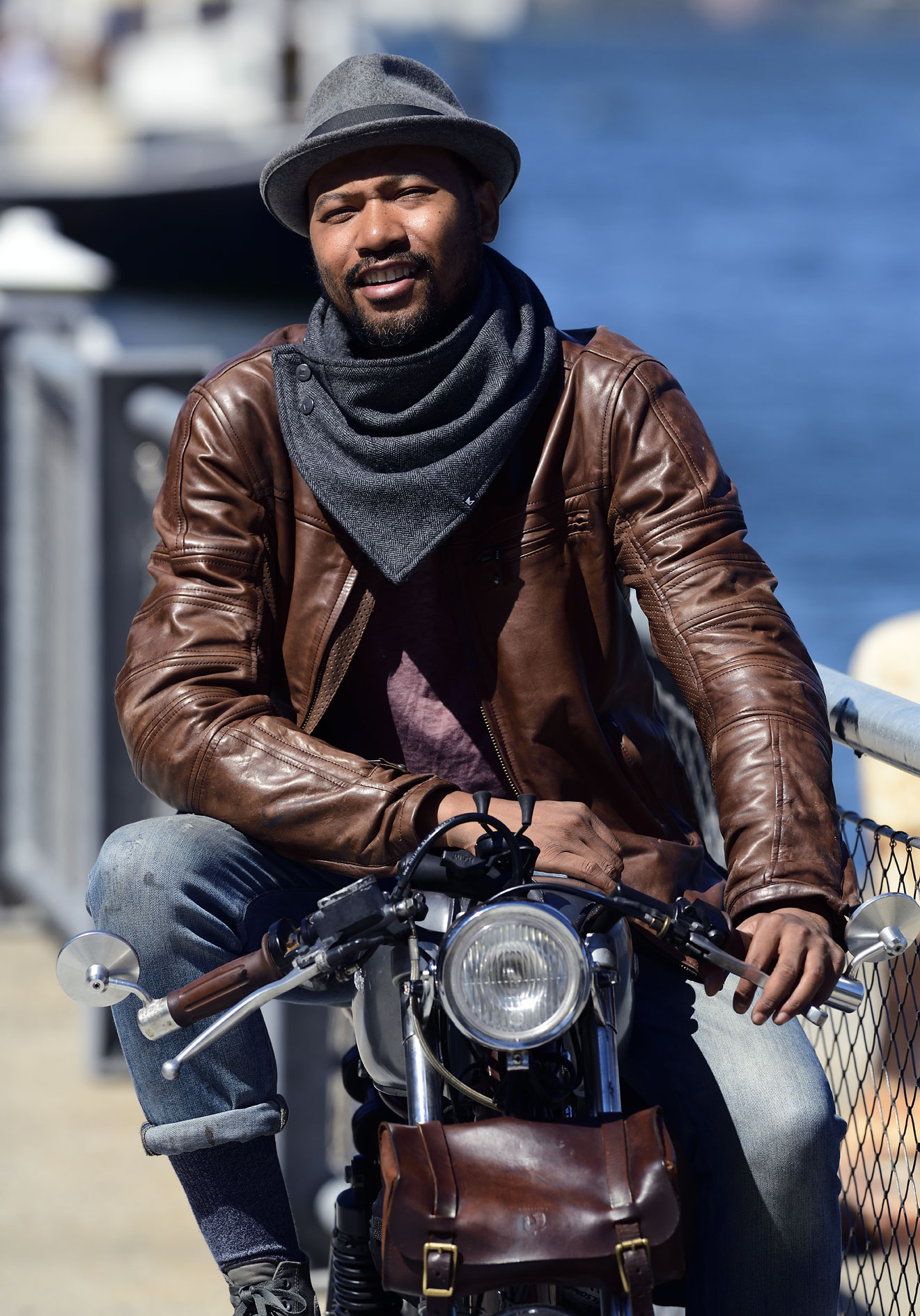 A closer view of the crossover cowl — Rahoul Ghose

That’s part of the excitement during this whole journey, is I have never done any of it before, and just learning along the way and meeting really interesting, weird, kooky people is part of the fun. And it’s validation, because they want to help me.

One idea is a double holster strap with plug and play accessories to carry all of a traveler’s essentials — phone, wallet, passport — hands free.

Like the cowl, which over the past year has gone through some design upgrades in material choices and snaps, the holster is in a revisionist's flux, with Crichlow looking at both snaps and even magnets to attach pockets to the main shoulder straps.

Ultimately, Crichlow’s path is as unique as his own personal style … but that’s by design.

“The Buddha talks about … ‘you can’t follow my path … you have to find your own path’. In order to do that you have to go through struggle ... through your process,” he says “Enjoy the process of struggle … and have a bigger goal in life, seeking personal progress to become your true self. If you become stagnant, that’s when you’re unhappy … not trying new things … not balancing the mental and physical.”

As Crichlow tells kids during some of his inspirational talks … “it’s about understanding limitations, maximizing value … taking weakness and making it a strength … having the intention to continually do things and evolve.”

The crossover cover and its summer variant are available online at kynsho.com and in several New-York-based brick and mortar locations, including Filipacchi in Nolita, Triumph Brooklyn and Hudson Yards. Prices range from $85 to $125.

You can reserve yourself the company’s latest waterproof version on Kickstarter. As of today, the fundraiser had already attracted 33 backers. Delivery is expected by year’s end if the promotion is successful.

And, in addition to a presence at this years DGR event, Crichlow will also be part of the Gentleman’s Ride pop-up shop at Modern Anthology, 123 Smith Street in Brooklyn, on Friday, Sept. 27 from Noon to 7:30 PM. 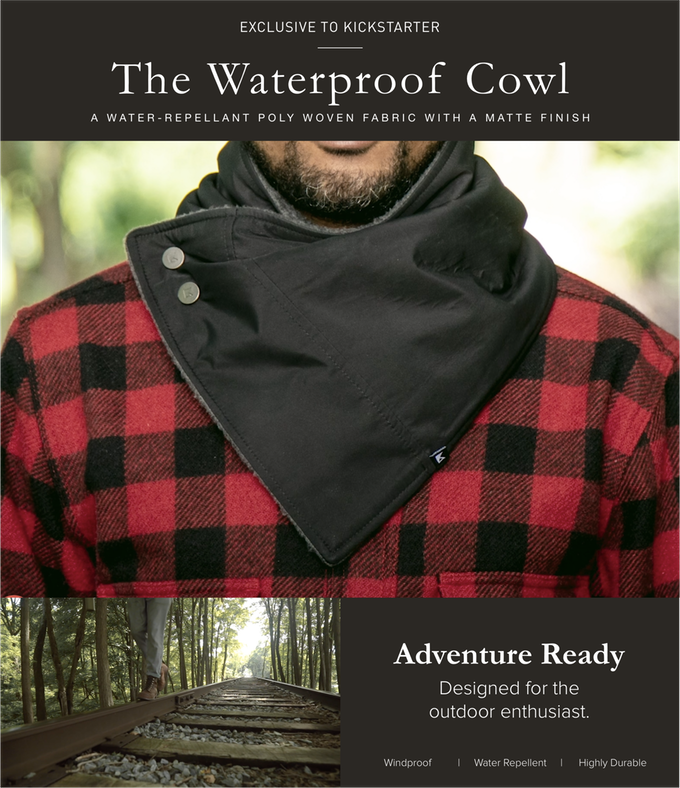 The everyday scarf designed for Commuters, Travelers and Adventurers.