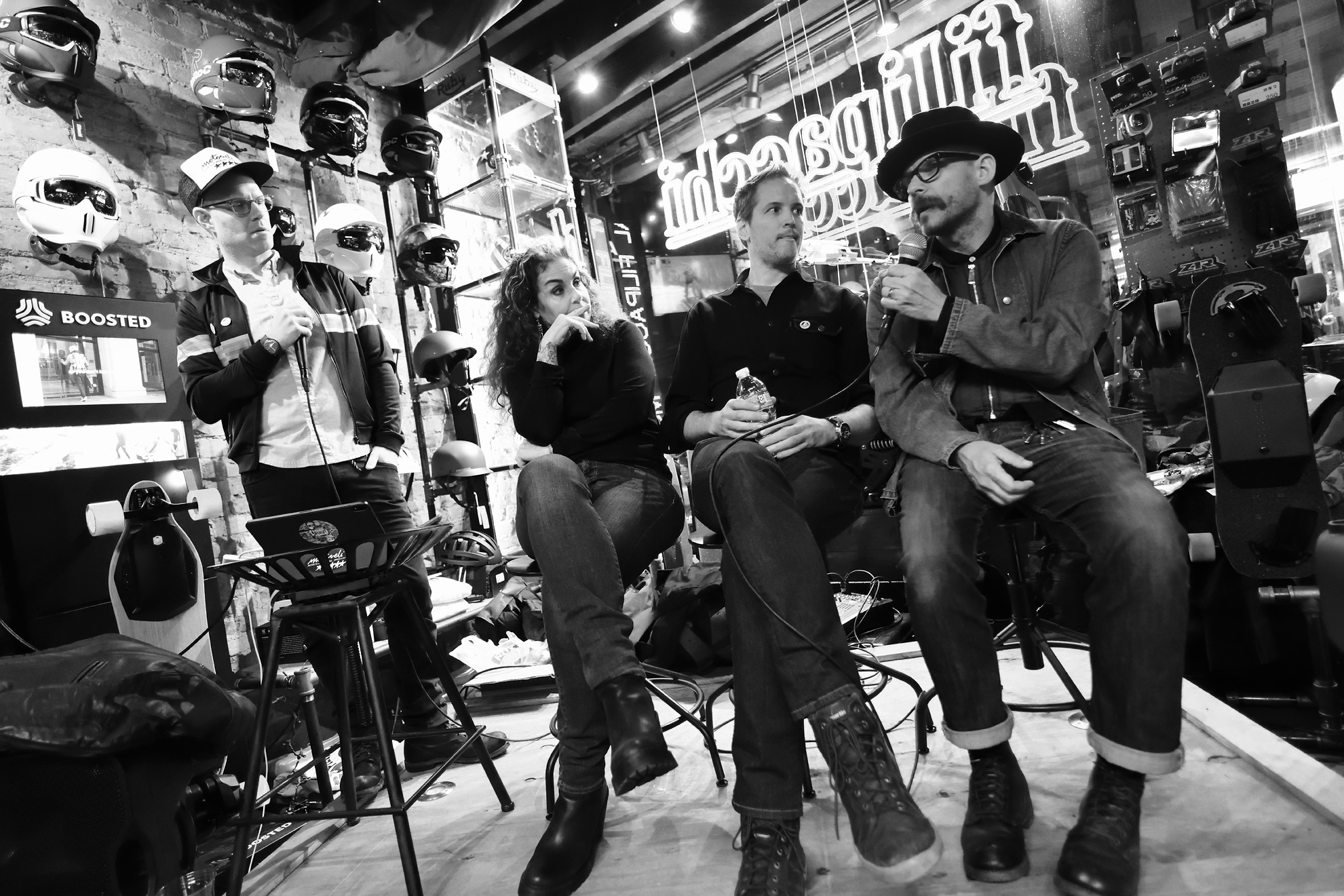 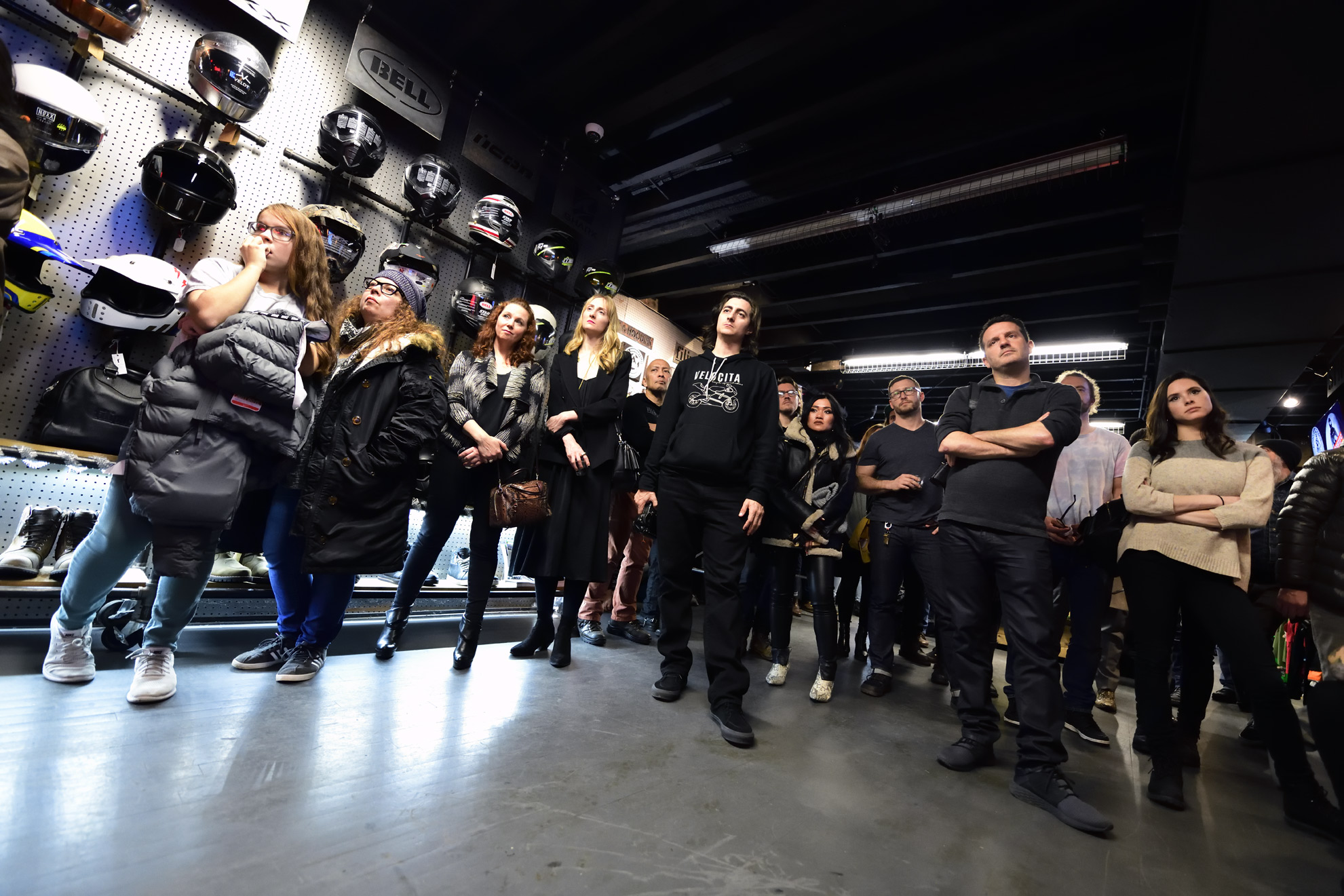 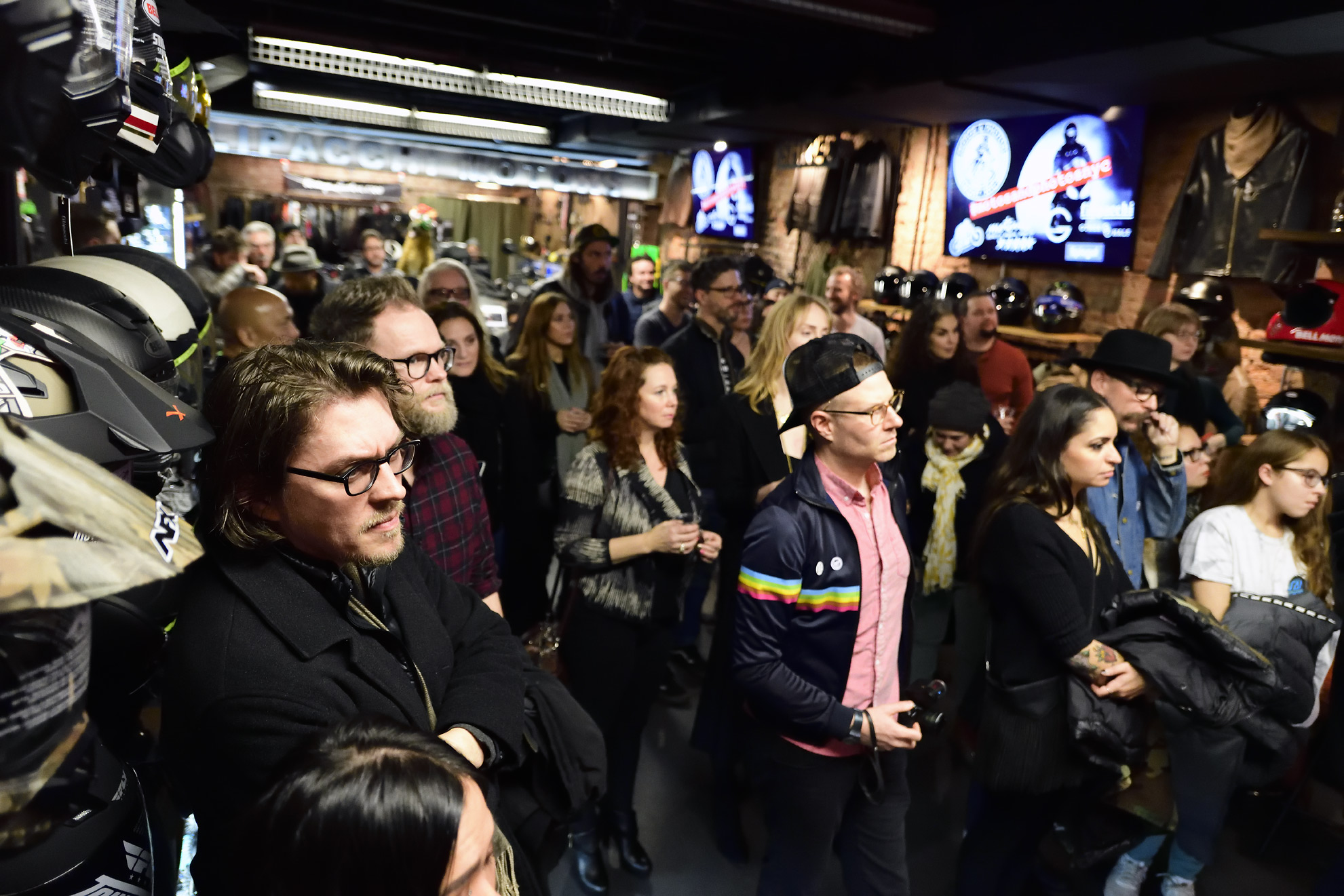 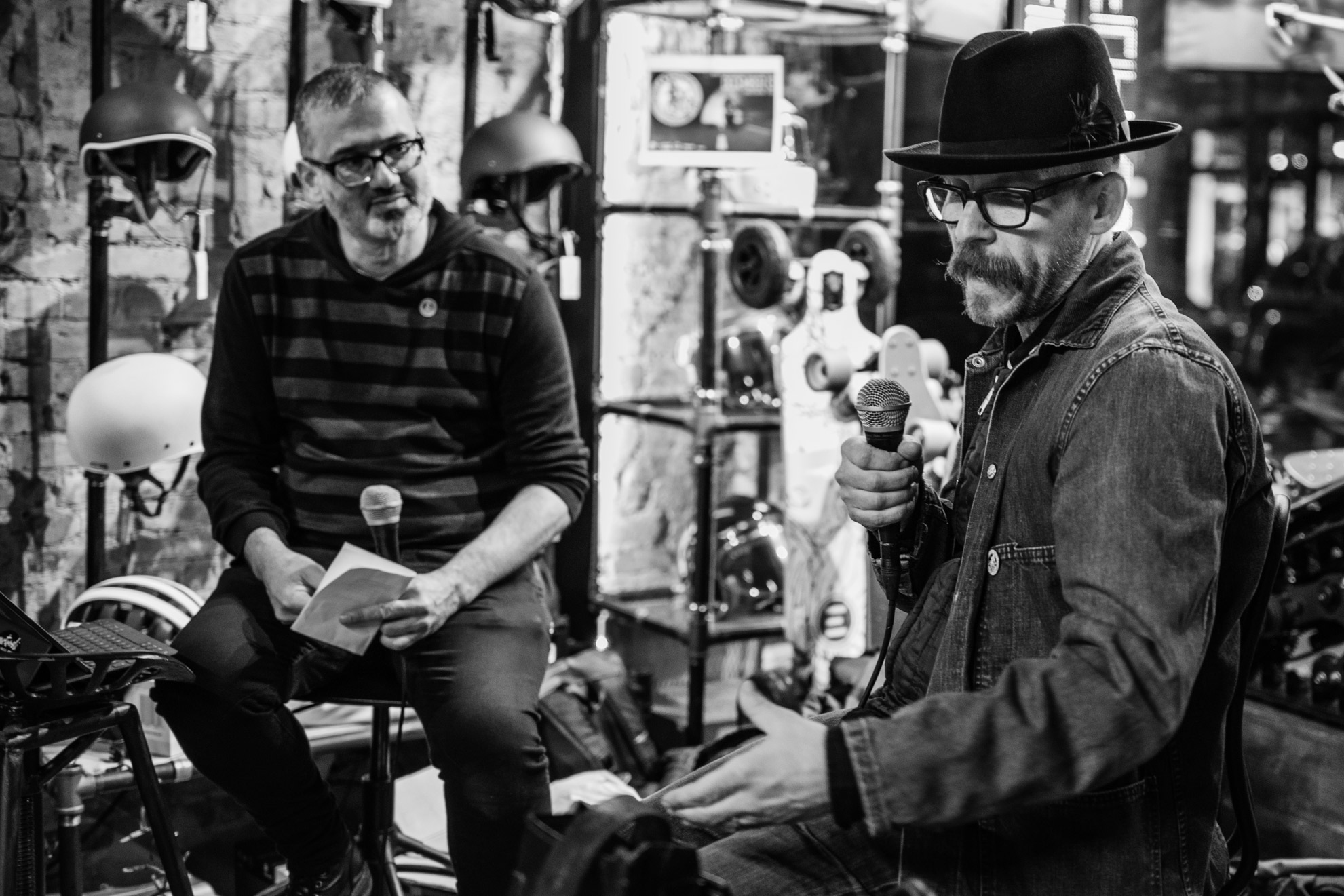 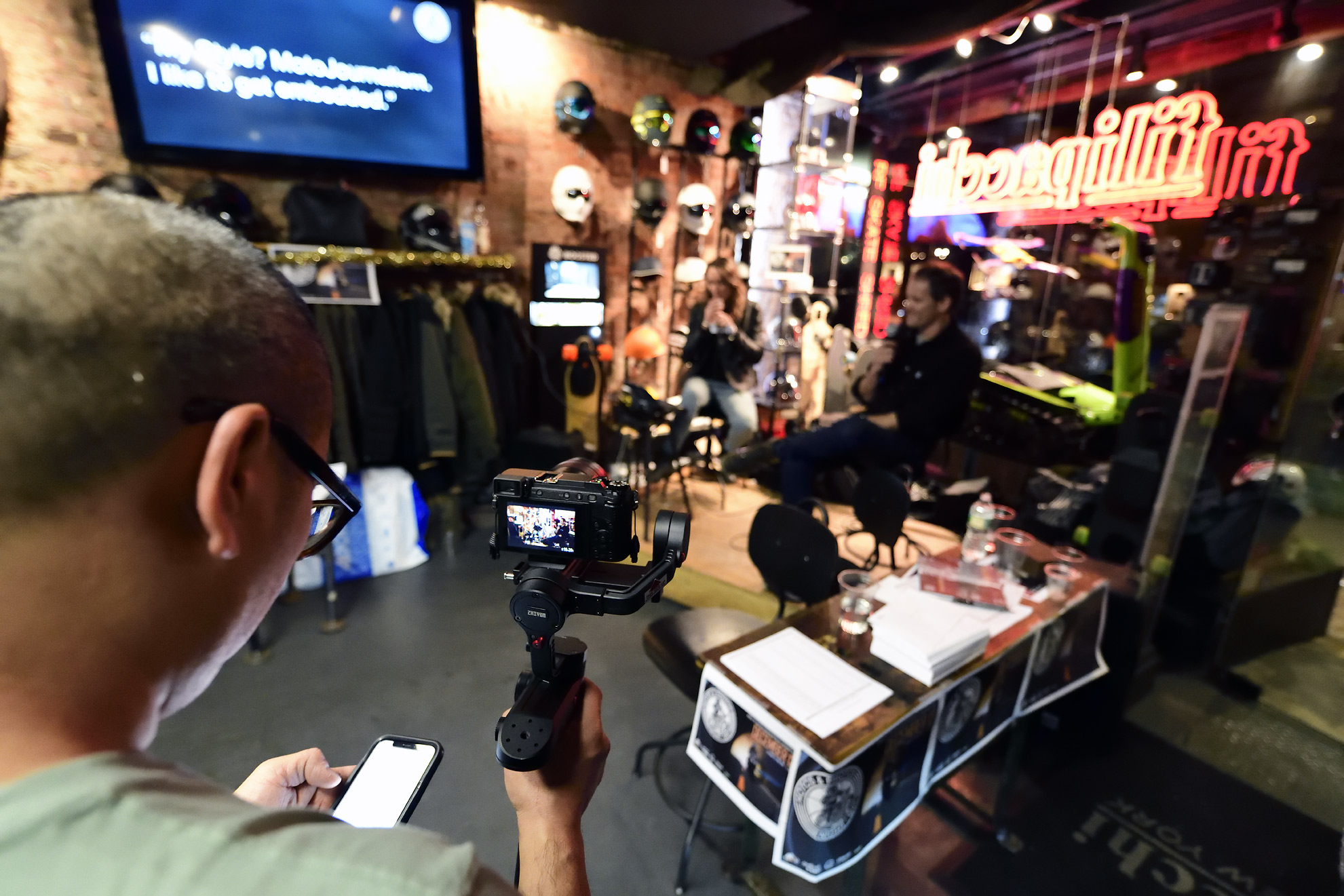 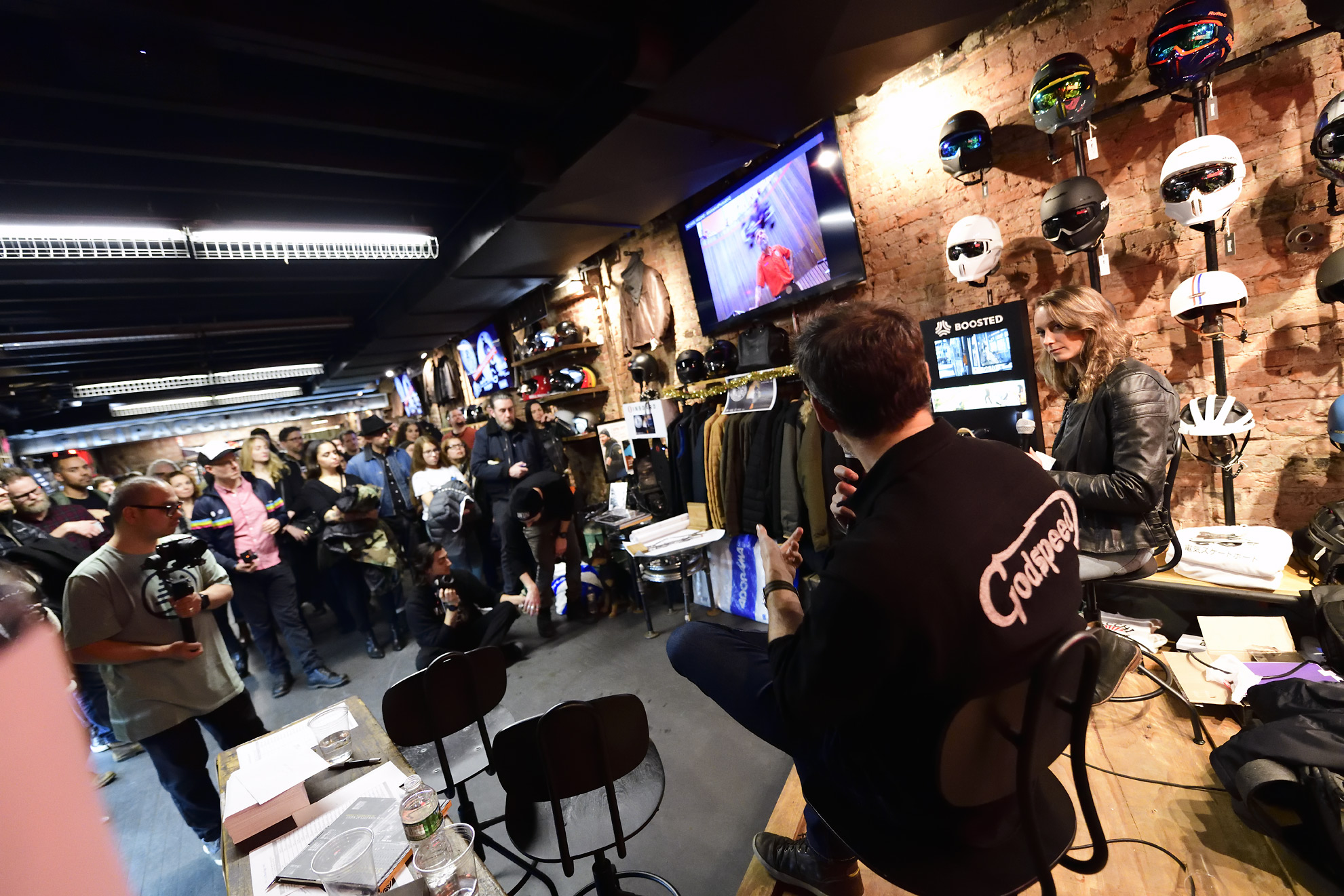 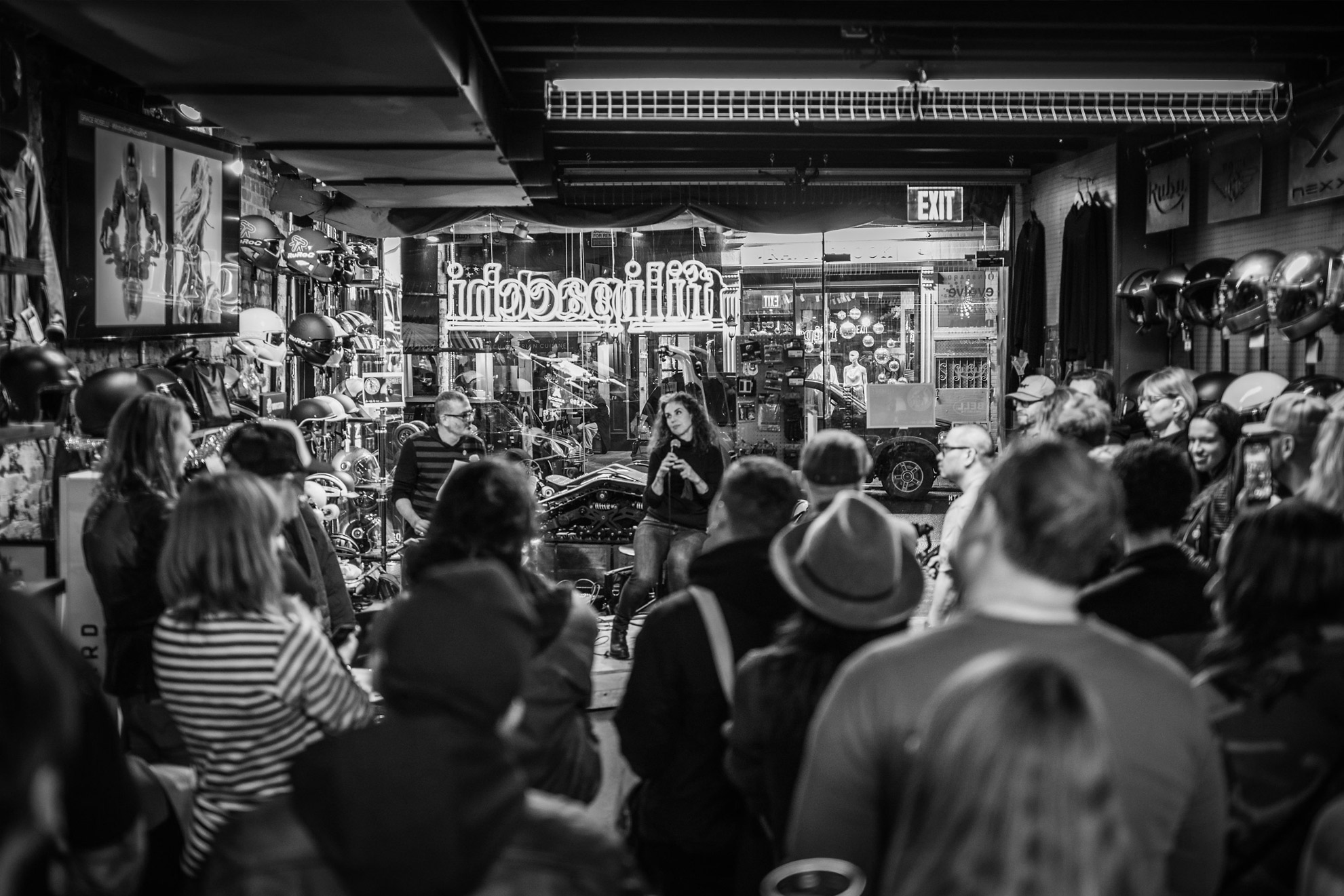 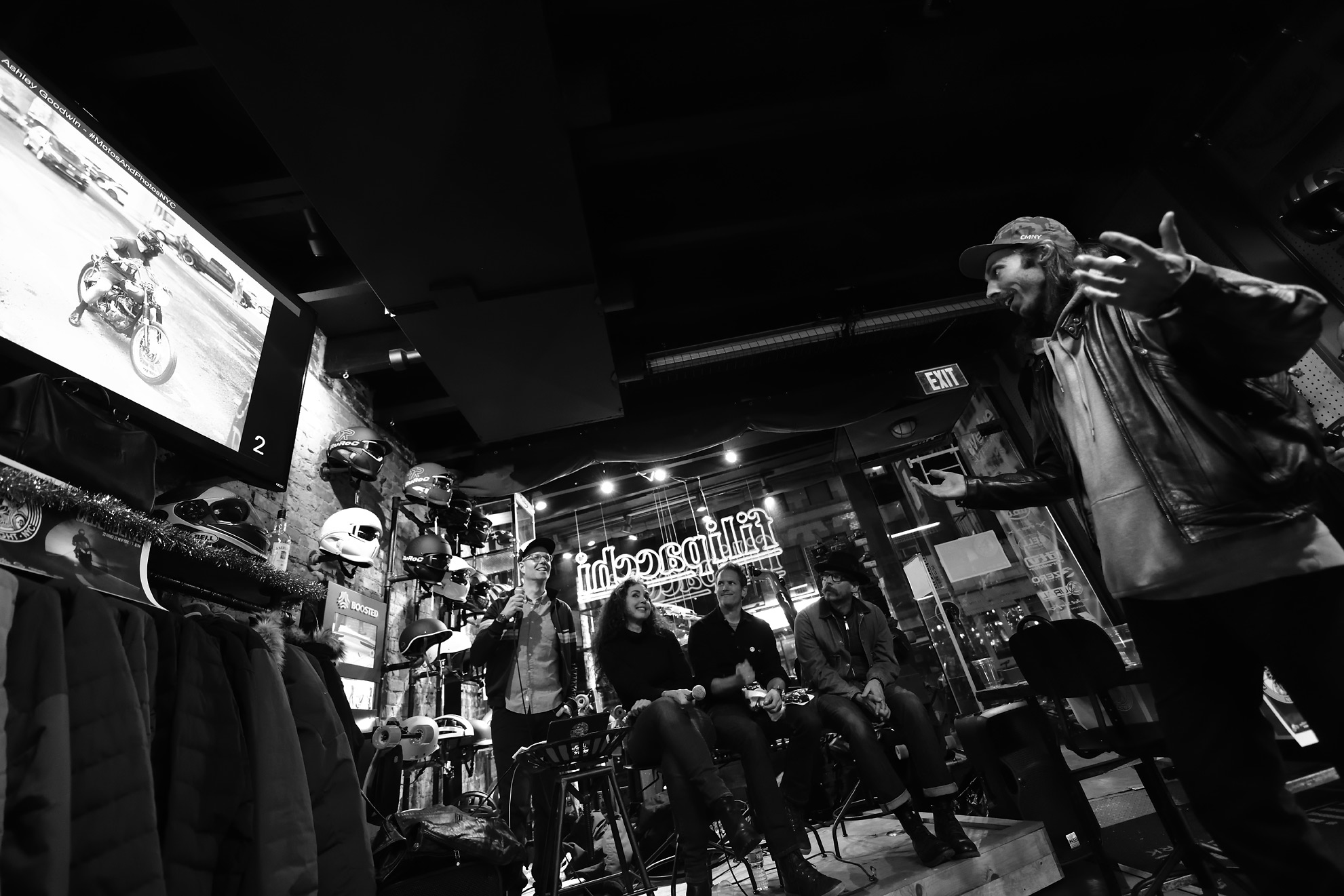 About 80 local photographers, moto enthusiasts and industry guests turned out for the monthly evening, which over the course of the riding off-season aims to encourage interchange and mentorship, and provide educational opportunities and inspiring content for the city's moto enthusiasts/photographers. Those who attended Dec. 13 also had a chance to socialize and talk about riding and shooting while enjoying food from Spiegel NYC and beer tastings from Brooklyn's Other Half Brewing.

Roselli, Landry and Higgins spoke about their experiences, inspirations and methodology, even offering advice during their individual 'getting to know the photographers' segments, before tackling a common subject as a group on stage -- 'In a world enamored with video and Instagram posts, how can moto photographers best represent their work?'. 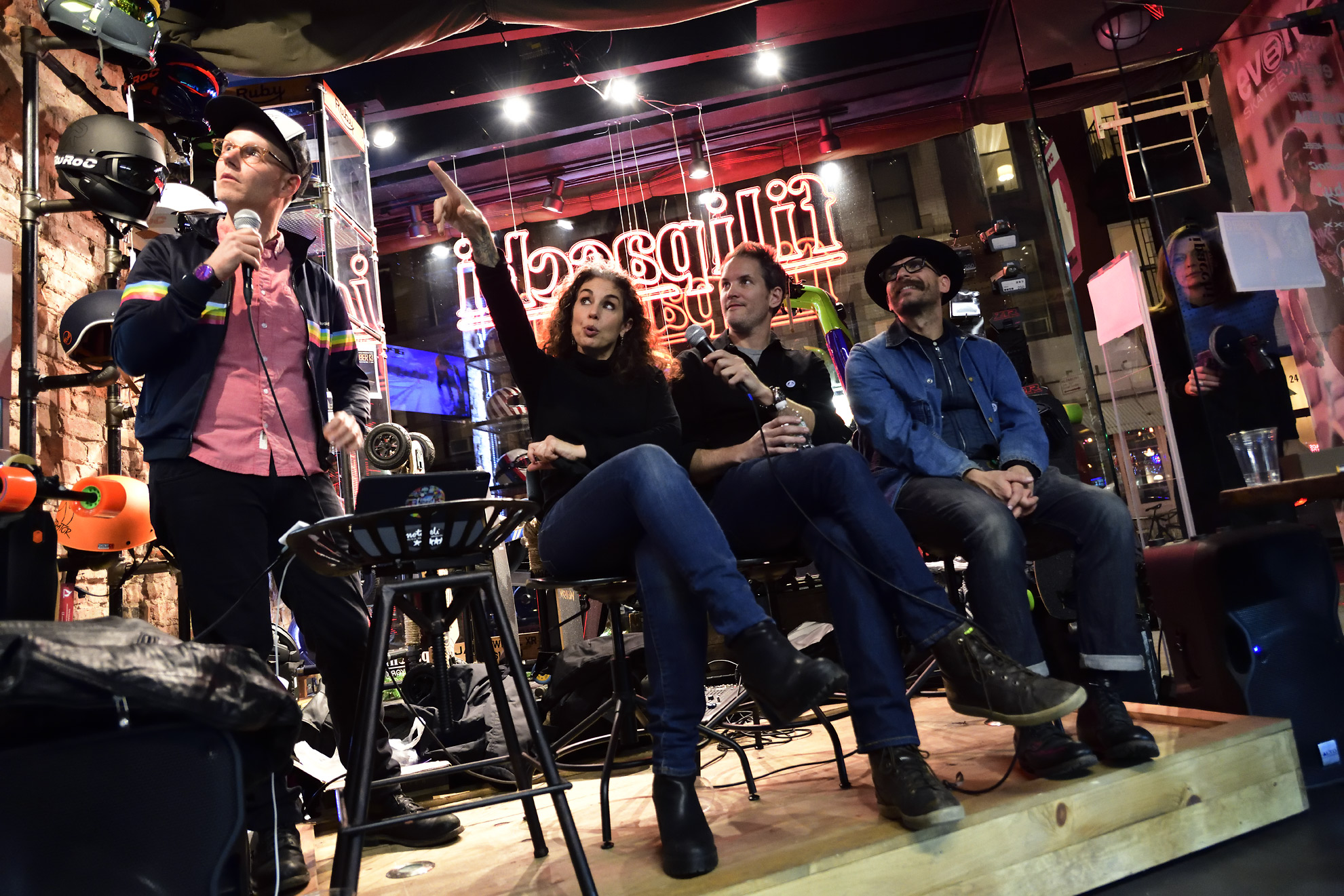 After a still ongoing struggle for awareness and rights, many women are now controlling, owning and celebrating the narrative of their bodies. The Naked Bike project is a performance of that narrative.

Roselli (@gracerosellistudio), whose photography and art convey a broad message of female strength in the moto world and beyond, spoke about her ongoing project 'Naked Bike' and its evolution from a similar series she did earlier in her artistic career, crediting her involvement with the local women's moto club The MISS-FIRES for the resurgence. Photos on display during the session included powerful studio shot and outdoor images of women and their bikes, with those profiled either dressed in full protective leathers in striking poses ... or nude, seemingly melding with their machines. Both conveyed confidence and power … some even poking fun at beauty norms. The self-taught photographer is now taking the generational, female-centric theme a step further with an incredible series on women artists titled Pandora's Boxx.

Landry, sporting his trademark antique 1923 Auto-Graflex camera and black fedora, spoke about his experience in capturing deeply personal portraits without the aid of a modern camera. A regular fixture at The Race of Gentleman and The Congregation Show in North Carolina, with his work regularly gracing the pages of DICE and Roller/Ripper magazine, Landry overcomes the weight of his equipment, dealing with longer exposure times and large film shuttles – and even the post darkroom development and subsequent digitization of shots, to produce 4x5 timeless, character-driven portraits of man and machine. His own work can be seen on deanchoochlandry.com but the Harlem-based photographer has also taken to getting recognition for film shooters with a new Instagram account @film__forever, which celebrates film and alternative process photographers, past and present.

I love making portraits more than anything. The conversations that lead to the photos are as important to me as the photos.

Mike Higgins -- of Distinguished Gentleman's Ride fame and a co-founder of The Godspeed Company -- rounded out the trio. A motorcycle and photography enthusiast with a keen eye for details and composition, Higgins showed some of his work from the DGR, The Handbuilt Show -- including Wall of Death images, and The Race of Gentlemen. One of his TROG images is currently shortlisted for the Bike EXIF MotoPhoto contest. Higgins talked about technique and which images spoke to him personally.

"A good pic captures a moment," he said. "A great one captures a feeling. It’s usually the light."

You can see more of Higgins' work on two IG accounts: @godspeedco and @higginsnyc.

During the group panel discussion, moderated by Ryan Snelson from Motoveli Magazine, the trio discussed both the merit and downside of Instagram, even positing whether the medium devalues photography as an artform. Common consensus was that for photographers IG was an entrypoint to their work and hopefully an impoteus for viewers to seek out those images in a larger format where the nuances are more accessible: gallery showings, etc. 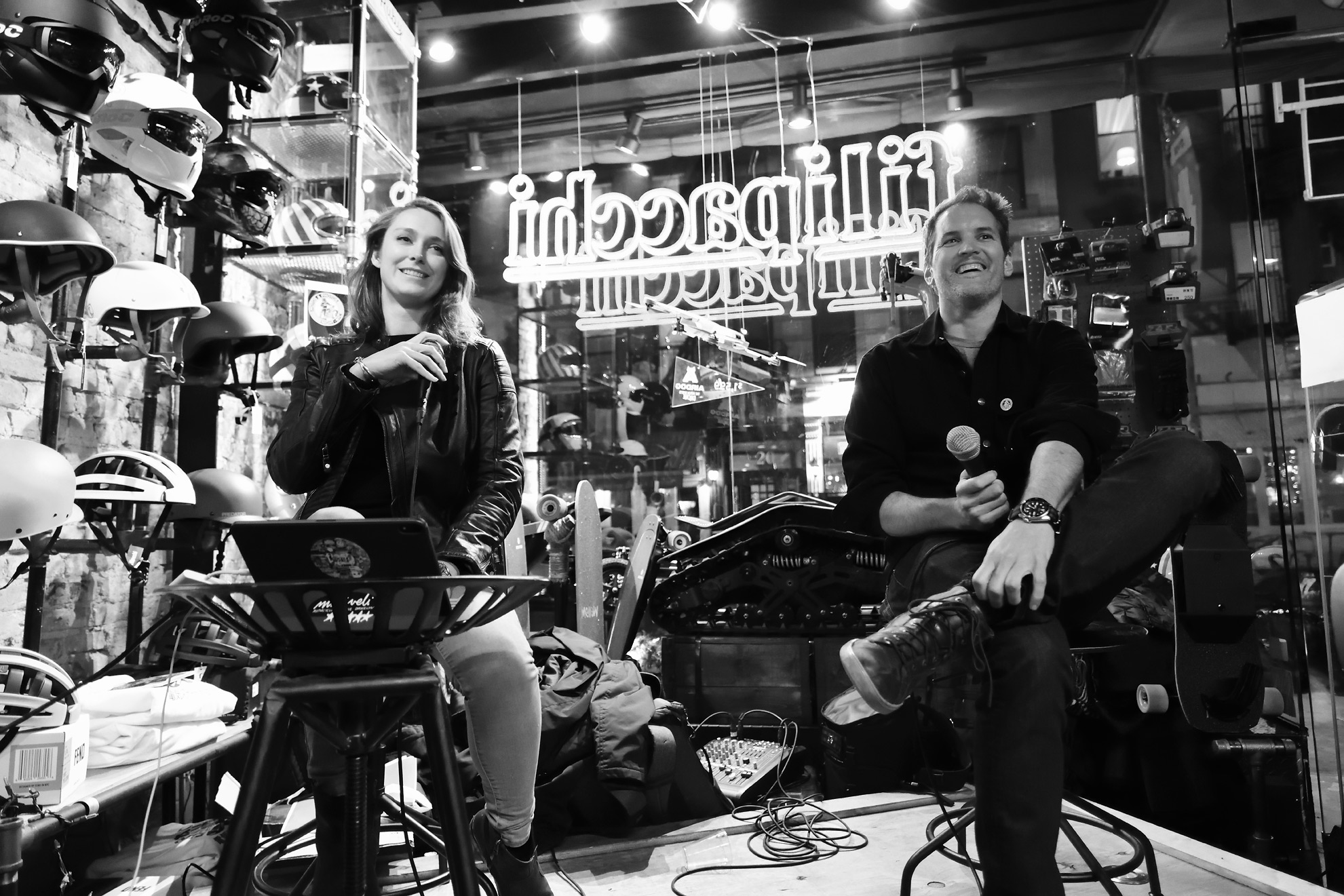 Make the camera see what you see. Give it a point of view.

The evening wrapped up with a group participation element, with submitted images being shown. For December local photogs were asked to submit their best photo exemplifying what it means to ride in NYC. After all in the off season when most bikes go into storage for the winter, we all need some inspiration to hold on to.

The top five, as judged by our event committee, were shown with photogs brought up to discuss their image. Top 3 received prizes courtesy of Godspeed Co and the DGR. Jean-Pierre (JP) Kathöfer took top honors for his night riding group shot, featuring more than a few familiar faces from the New York Classic Riders.

"Motorcycles are community and friendship that bring us all together," Kathöfer said in his submission. "Different cultures, nationalities, religion, skin color, gender, age ... you name it. But we all share the same passion, motorcycles." 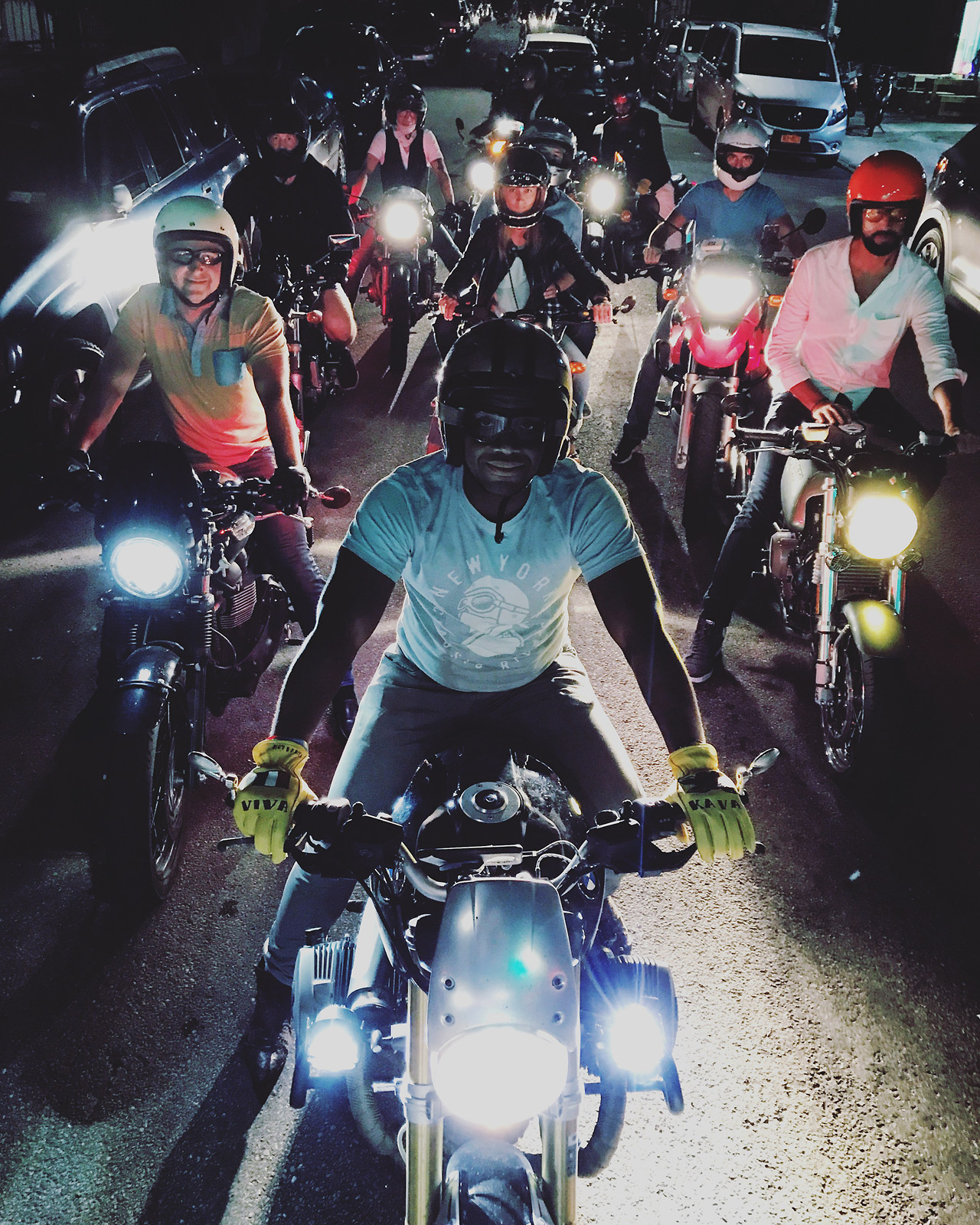 In second was Ashley Goodwin, for a rider image from his days at WORKS Engineering, while John Saponara took third for a photo of the Motofellas drag racing at one of their events. Rounding out the top 5 were Dave Ngo (rider approaching bike) and Shmulik Avital (stolen bike recovered), while images from Girard Fox (1949 Harley Panhead on a foggy day) and Allen Tannenbaum (Norton in front of a Blondie wall painting) received Honorable Mentions. All will be posted on the NYC Motorcyclist Instagram (@nyc_motorcyclist).

As always events like these are only possible with the help and support of the community. Thanks go out to our amazing hosts at Filipacchi -- Denise Lasprogata, Chad Phillips, and of course Craig Filipacchi, our sponsors -- Motoveli Magazine, The Godspeed Company, Other Half Brewing and Spiegel NYC, our volunteers Shaun Lee, Mariya Chekmarova, Mony Ty, Alice Oh and Melissa Diaz, our committee members Ryan Snelson, Kirsten Midura and Mike Higgins, and all of you who turned out for the night. We look forward to seeing you in late January for round two (details TBA). A safe and happy season to all of you from NYC Motorcyclist. 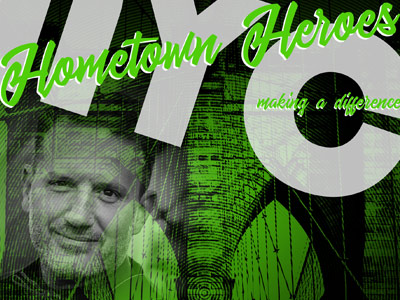 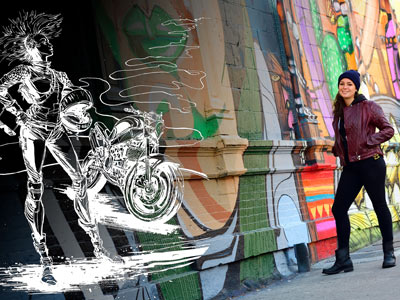 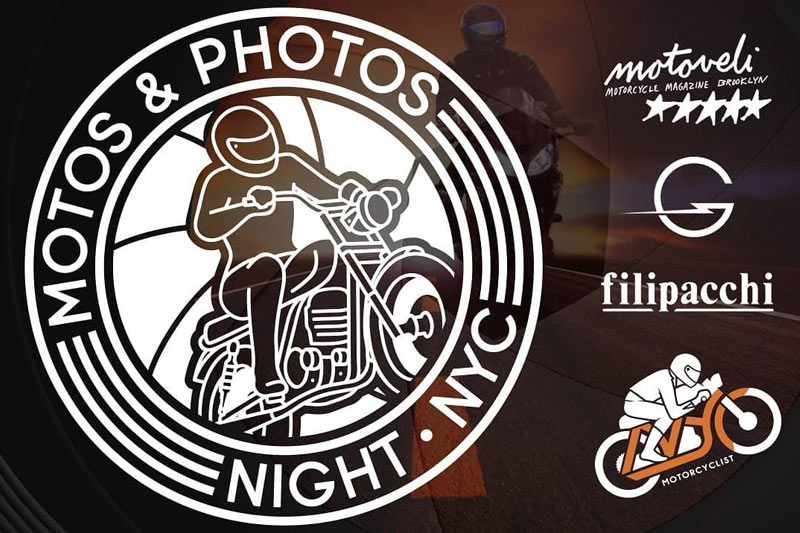