Zen and the Art of the Gourmet Taco 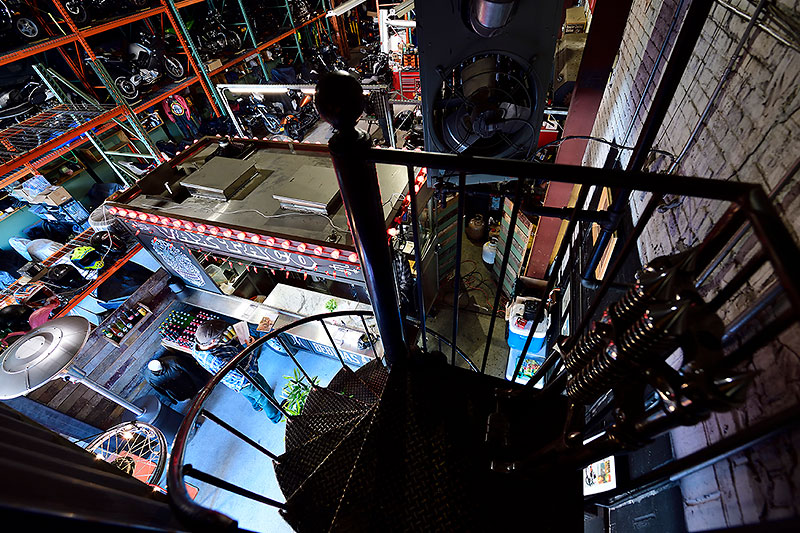 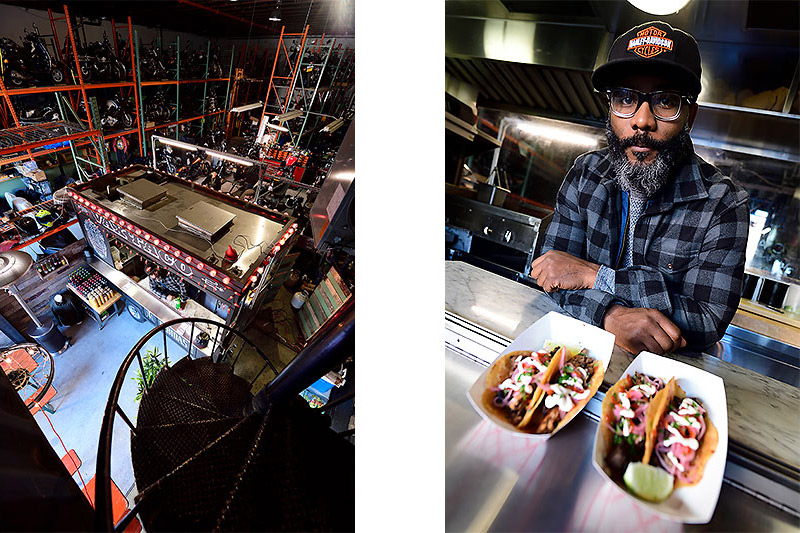 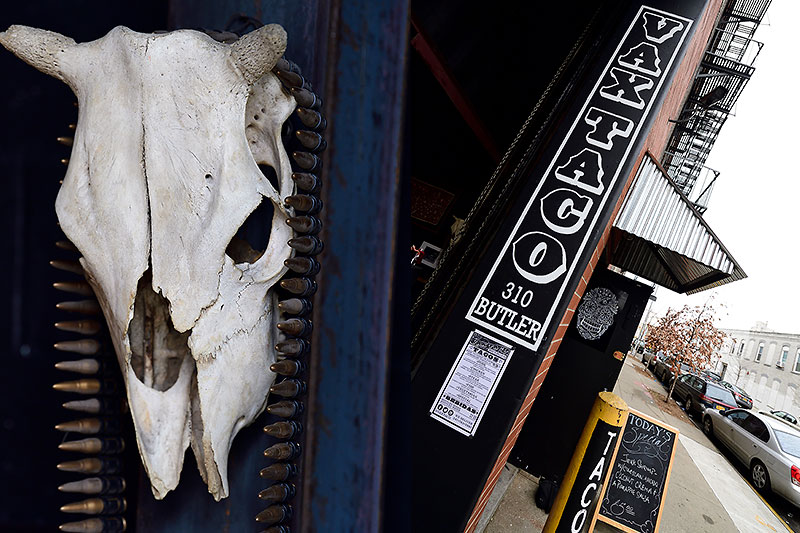 There is a sophistication in simplicity when it’s done right … whether you’re running a 5,000-square-foot motorcycle storage facility and private members’ community garage … or a gourmet taco stand.

For Brooklyn’s Justin Walters it’s all three … a combination of businesses he’s blue skied about since he first opened Vax Moto six years ago.

“Originally when I first wanted to open up a garage I had this master plan … food, retail, wrenching, merchandising, beer garden … but it was an extremely expensive financial venture that I just wasn’t ready to do on my first out,” says Walters.

Now three locations later, with plans to double the Butler Street facility’s 225-bike space in the very near future, the 45-year-old family man and ‘74 Harley Shovelhead owner says the timing was perfect for his newest idea … Vax Taco.

The concept pairs fresh, locally sourced ingredients together with homemade tortillas produced onsite before opening. In fact, those ingredients and tortilla production play heavily into the cart’s hours of operation. When the food runs out the day’s done.

“As far as I’m concerned there could not be a better fit for motorcycles and the esthetic of this place than a taco cart. To do paninis or crepes … it doesn’t make sense … this makes sense to me.”

The ‘taco-moto’ union is entrenched in the eatery’s branding which features a logo inspired by Día de Muertos (Day of the Dead) and motor head iconography, combining a traditional Mexican skull motif with tools, sprockets, pistons, bolts, spark plugs and shocks. 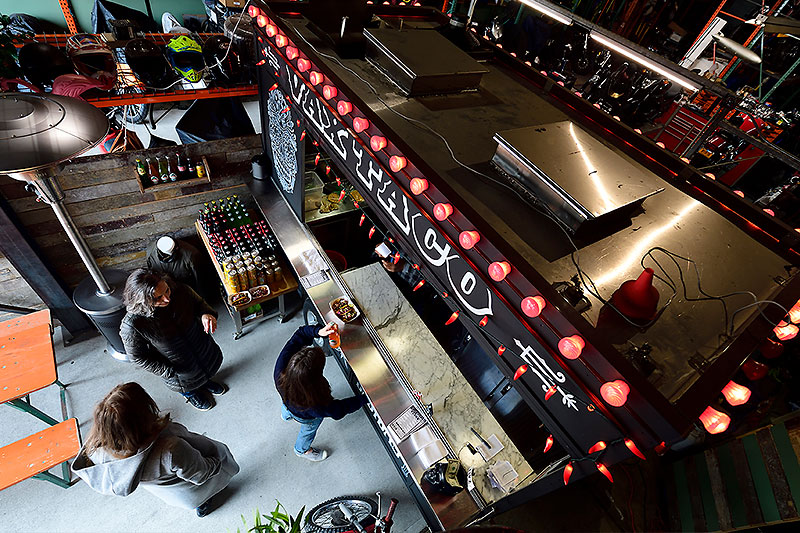 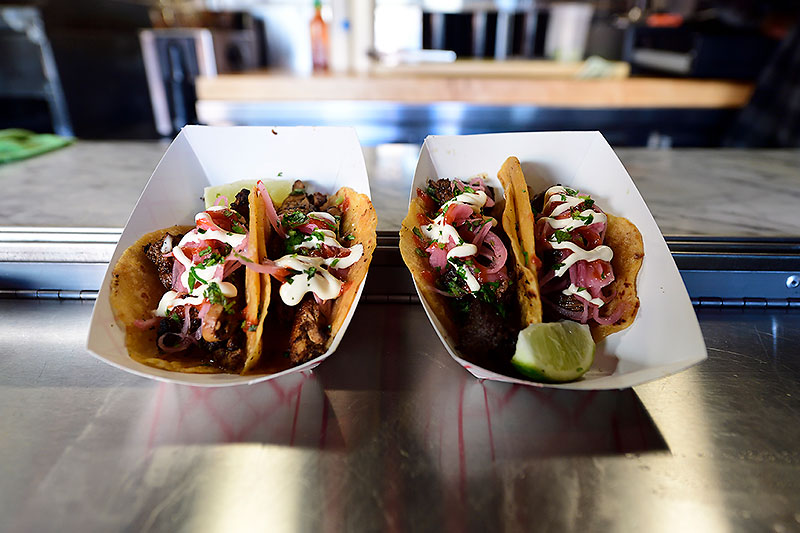 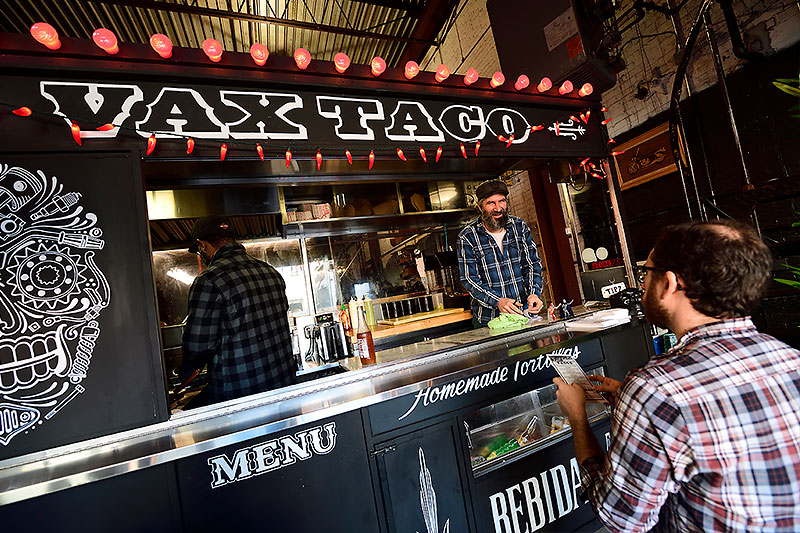 As far as I’m concerned there could not be a better fit for motorcycles and the esthetic of this place than a taco cart. To do paninis or crepes … it doesn’t make sense … this makes sense to me.

“It’s really set up like a phenomenal tattoo. I drove him a little crazy as I wanted to throw in as many motorcycle bits and pieces as possible … we did five runs of it before the final version.”

The food speaks for itself. Just looking at the five-item menu, not including a weekly special, will tempt the taste buds with inspired taco filling choices featuring homemade sauces, salsas and pickles:

A daily run of 300 tortillas, made one at a time with a hand press, makes for a natural cutoff to the business day which for now sees Vax Taco serving customers Monday to Friday from 11 am to 5 pm. In the spring, an evening shift from 6 pm to midnight is currently under consideration. And by summer, weekends as well.

Those lucky enough to hit Vax Taco early in the week will also be treated to weekly tacos specials ... watching @vaxtaco on Instagram followers might have seen one incarnation with lobster last month.

“That was a test run for the summer, which we definitely will do … but every Monday we do a special taco. I make a certain amount and it lasts as long as it lasts,” Walters says. “The lamb shank was absolutely to die for, the brisket was killer, and we’ve got the jerk shrimp going right now.”

(Editor’s note: the interview was done during the lunch hour on a Thursday and the specials had already sold out for the week)

“What we do downstairs (for prep) is the most casual, relaxed, refined, brilliant thing for me to get back into the food biz. There’s this new energy that I have. And I’m excited to do it. It produces exactly what I need and it’s fun again. I come from a pretty strict, not militaristic, but a proper French kitchen where I cut my teeth in the food industry. That turned me off heavily for a long time because nothing needs to be that serious, certainly not food.”

Vax Taco launches at a time of great growth for Walters, who is already making plans for Vax Moto’s expansion, a space which will also include a food cart selling burgers, fries, onion rings and shakes. 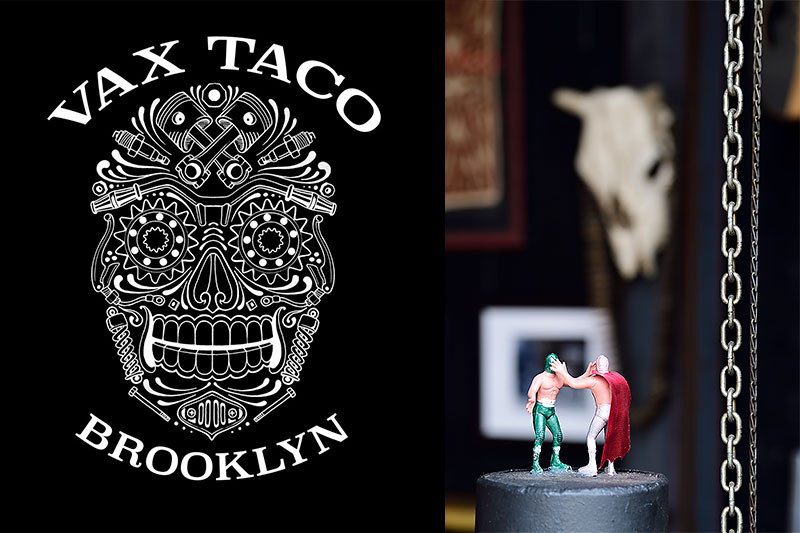 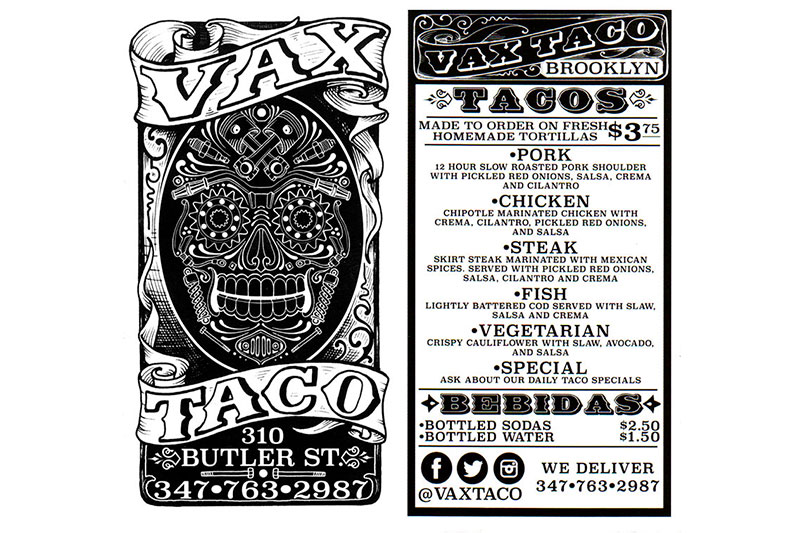 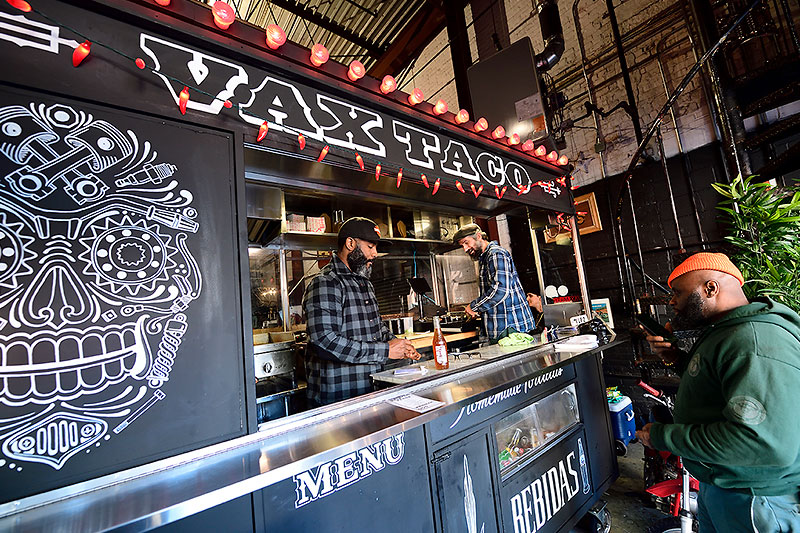 What we do downstairs (for prep) is the most casual, relaxed, refined brilliant thing for me to get back into the food biz. There’s this new energy that I have. And I’m excited to do it. It produces exactly what I need and it’s fun again.

"There’s lots of avenues … we used to do gallery shows in our old location on 3rd Avenue,” Walters says, adding he has already been talking with Corinna Mantlo of CINE MECCANICA fame about hosting movie nights in the new space. "The whole concept was always to add onto the lifestyle the garage was already affording. You walk through my door and I want you to feel like this is your home.”

Vax Taco and its upcoming, yet-to-be-named hamburger cart twin will also help with Walters’ goal of hosting events, both arts and moto related.

“We want the masses to come to us and to experience the whole thing … the experience is equally as important as the product we’re putting out.”

For now, Walters and his partner in the venture, Pierre Woody, will continue to experiment while focusing on maintaining the simplicity of current offerings.

“Pierre has a heavy retail background with a lot of really good ideas,” he says, adding for now the garage side of things has been toned down a bit while Vax Taco hits its stride.

“We’re scaling way down … one mechanic … max three bikes … but talk to me in two months when it’s peak bike season.”

The future? Blue skiing again Vax Taco, with the right amount of demand and preparation could go 24 hours, seven days a week, Walters says. He's even juggled the idea of a full on brick and mortar restaurant.

“I’ve thought about that since the last day I was in the restaurant business … there’s something so inherently sexy and appealing to me about my kids sitting at a bar doing their homework with Mom being the maître D with me in a small mom and pop sort of thing. It’s equally appealing and terrifying because I know what it takes, and I know it’s a labor of love.” 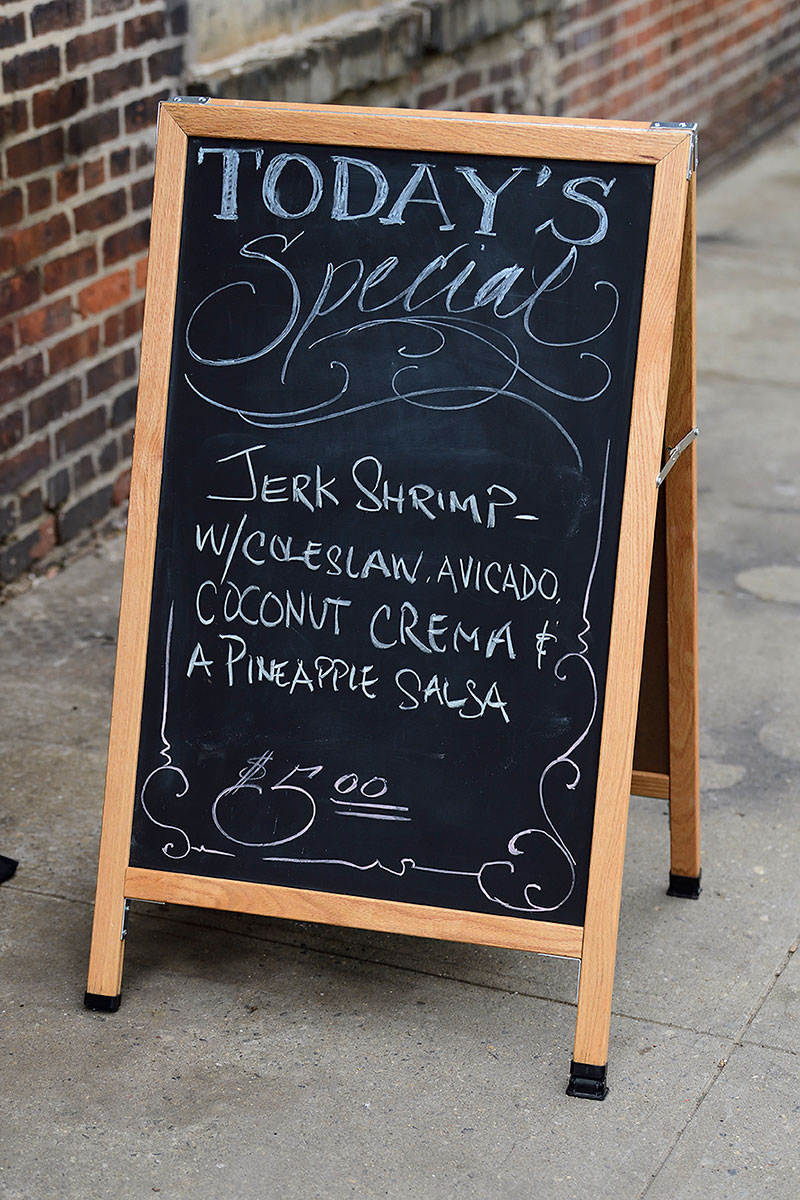 You can visit Vax Taco online at: