STS rounds out a trio of devices: Vigo Smart Track 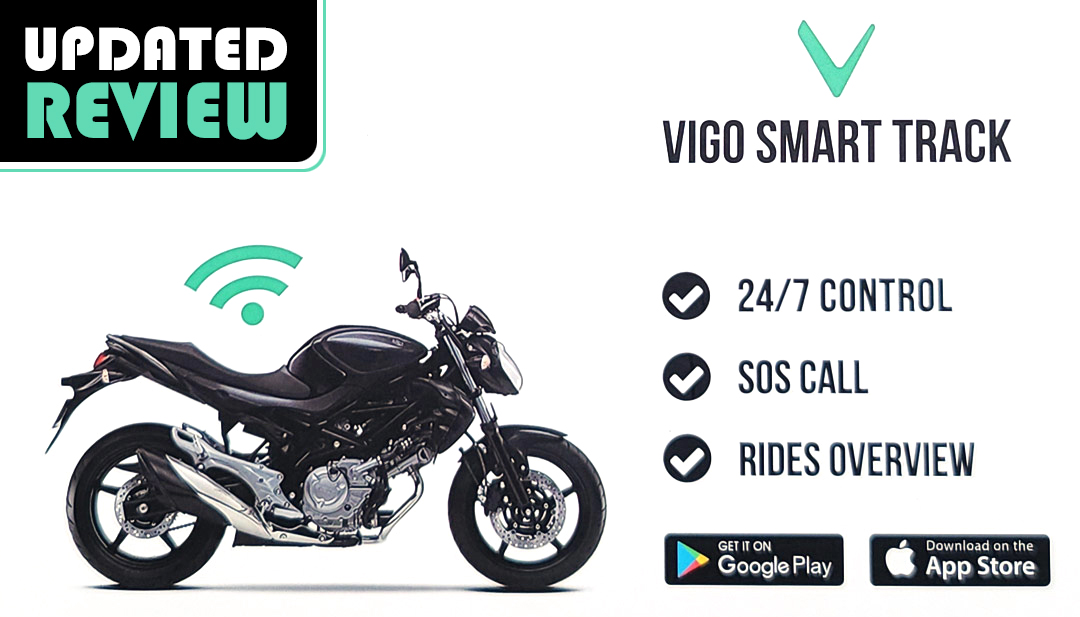 Developing the Vigo Smart Track, we used all the knowledge and experience from creating the Smart Turn System and Smart Brake Module. New generation hardware and advanced software enabled us to pack all these features into a pocket-size tracker that fits on every bike.

Imagine a cellular-GPS device that tracks your motorcycle, even when you’re nowhere near it, something that in the event of a theft can help you recover your ride … yes, those have existed with accompanying smart phone apps in the past, to limited success.

Then add to the mix:

Enter the Slovenia company STS, which has already scored two wins in the essential moto device category over the past few years with their Smart Brake Module (which flashes the brake light when it detects you are slowing down) and the Smart Turn System (which cancels your indicator lights when you have completed a turn or lane change, automatically).

“Developing the Vigo Smart Track, we used all the knowledge and experience from creating the Smart Turn System and Smart Brake Module,” the company says on their website. “New generation hardware and advanced software enabled us to pack all these features into a pocket-size tracker that fits on every bike.”

The device itself is a simple install, a small black plastic box (about 3 x 1 inches) which connects to your battery’s positive and negative terminals via one split cable, and sits under the seat, attached with double-sided tape. The kit also includes some zip ties to keep the device securely mounted. One recommendation we did receive during our beta test was to not position the device directly under where you sit on the bike, to maintain the best reception.

The accompanying Vigo Insurance app, available on Google Play and the Apple App Store for all android and iOS phones, connects with the device after you set up an account, including your contact info, photos of your motorcycle and of course the insurance policy number and QR code provided with your purchase.

That first connection requires you to go for a short ride outside for the device to register itself with the network server and your phone. Once set up, the Vigo mobile application enables you to access your motorcycle from anywhere in the world. If the bike moves while you are away, you receive an instant warning notification. At home, when you and your phone are on the bike, the device automatically authorizes you.

What attracted us to the new Vigo product … we do own and use both the STS brake and turn signal modules … were two features we had not seen on other tracker devices we’ve used in the past.

The first is the presence of an internal battery should the power be cut off to the device … say if your battery dies. This battery recharges itself every time you ride. The second and more important feature is the device’s advanced sleep mode, which DOES NOT drain your battery when the bike is parked and turned off. We will have to see over the long term whether this proves true. We have heard from other sources that if you plan to park a bike for more than three weeks that no tracking device can be 100 percent guaranteed to not have an impact on your battery, especially if it is of the smaller lithium ion variety.

This was the main reason we uninstalled our last GPS tracker device, which, in it’s effort to maintain and seek out a cellular signal while parked in the garage over the NYC winter months, completely drained the battery after a two-week absence from riding. 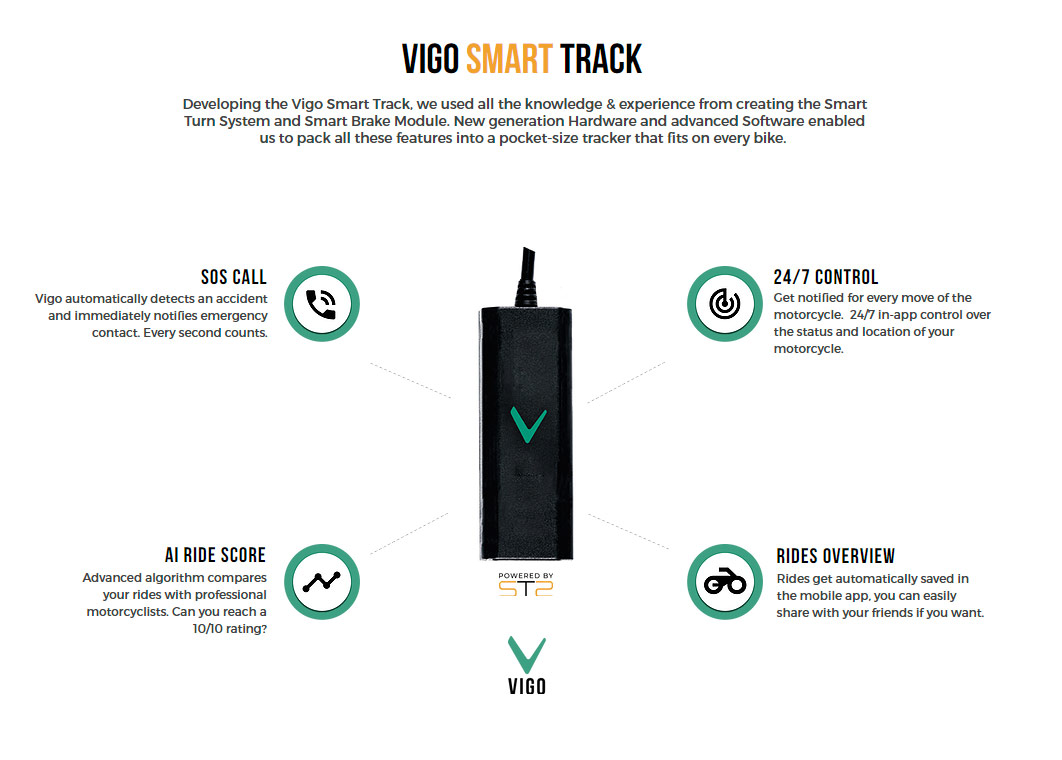 (An) SOS is activated when the Vigo Smart Track’s sensors detect sudden shocks, forces, jumps or movement. At that moment, the SOS is activated. A countdown of 30 seconds on your app will appear and check if you are okay. If you aren’t able to click ‘I’m OK’, help will be called.

The combination of advanced theft and accident alert features makes this a must-have addition to any bike, giving both you and your friends & family peace of mind.

With the accident alert, an “SOS is activated when the Vigo Smart Track’s sensors detect sudden shocks, forces, jumps or movement,” says Petra Zagmajster, Vigo Insure, Content Marketing & PR. “At that moment, the SOS is activated. A countdown of 30 seconds on your app will appear and check if you are okay. If you aren’t able to click ‘I’m OK’, help will be called.”

Of course, as a rider, this is one feature you hope you won't have to test. Keep the rubber side down ... as they say.

The soon-to-be-released Vigo Smart Track device is currently on pre-order for $96 US (33% off) including: the Vigo tracker and 1-year subscription, a lifetime subscription of $4.99/month ($7,99 regular) after the first year, a SIM card with mobile data covered, and accident detection / emergency call features.

The device features a two-year warranty and can be used in the USA, Canada, Australia, the EU, UK, Switzerland and Norway. Only 1000 pre-order units are available, the first of which ship in early August, after which the regular price will apply: $145 with a yearly subscription.

READERS' NOTE: after beta testing in North America STS made the decision to supply the US market with 3G units rather than the 4G version sold in Europe. We had issues with the beta 4G unit connecting, but after receiving the final 3G unit late last week, we had no issues with the initial connection/setup or use of the app thereafter.

To find out more about the Vigo Smart Track visit the official website at: track.safer-turn.com. STS’s other devices can be found on their main site, safer-turn.com, Facebook and YouTube . 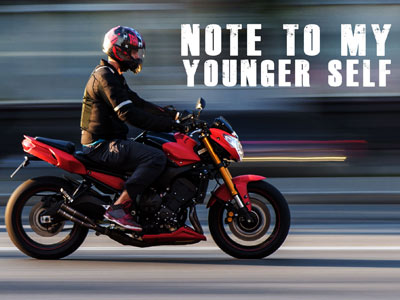 Note to My Younger Self

Moto Tips for the Novice

The one that started it all: The Smart Turn System is a small device directly wired into a motorcycle's existing turn signal system and its internal sensors capture and send data through a complex algorithm to help determine the bike's lean angle, heading, vibrations, and acceleration to detect if the turn has been completed and if the turn signals need to be canceled. All of this is done automatically, allowing the rider to focus on the road and enjoy the ride.